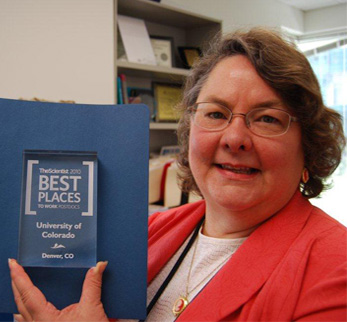 Valerie Saltou holds an award from The Scientist magazine, which ranked the University of Colorado Denver at No. 7 in its 2010 “Best Places to Work for Postdocs.” (Photo by Jackie Brinkman)

Across the nation, postdoctoral fellows have often fallen through the cracks at some research institutions. They weren’t students, yet they weren’t employees, either. There were often complaints of low pay, long hours and no benefits.

Similar problems befell University of Colorado Denver postdocs, where each department handled the fellows without any campus standards or consistency. But in 2008, the university developed an employment policy for postdocs, giving them benefits enjoyed by other employees, and created the Postdoctoral Office to oversee issues such as hiring, evaluations and compensation. Leading the effort was Valerie Saltou, who was hired as postdoc coordinator.

Saltou helped institute standard practices for fellows on the Denver and Anschutz Medical campuses, helped establish a local affiliate of the National Postdoctoral Association, and worked to improve communication and job-seeking opportunities.

A year after the policy was instituted, postdoctoral salaries were increased by an average of $4,800. And in 2010, The Scientist magazine ranked the University of Colorado Denver at the No. 7 spot in its eighth annual “Best Places to Work for Postdocs” survey. The previous year, CU Denver was in the No. 62 position.

The new policy also places limits on the length of a postdoc appointment.

“When my office opened in 2008, we had about 35 postdocs who needed to move forward.  Many had been a postdoc for 10 or more years,” she said. “I called all of them in individually to discuss their progress and moving forward. I also spoke with the mentors. One gal had been in the postdoc job code for 21 years. … She was distraught over learning she had not earned any retirement benefits for more than two decades. We were able to move her, as well as the others, into a permanent position within a few months.”

In other instances, Saltou said, foreign postdocs worked for less than minimum wage. The new policy instituted a minimum salary/stipend based on years of experience.

Saltou is no stranger to university life. She worked at Iowa State University for 17 years before moving to Colorado. She worked on the University of Colorado Boulder campus, including as executive assistant to the Vice Provost of Information and Technology as budget officer, human resources administrator, program manager and proctor of the newly built ATLAS Building.

Now in her new position, she monitors and approves employment actions that affect postdoctoral fellows/trainees, and provides needed services to the postdoc community and rostering departments. She’s currently building a training program, collecting resources for career development programs, offering a job opportunities website, and assisting the Postdoctoral Association to function.

1. How many postdocs work on the Denver and Anschutz campuses at any given time and what makes them in a class of their own?

Our postdocs are defined as someone with a terminal degree and will be engaged, for at least 75 percent of an appointment, in research, scholarship or teaching. They come from all over the world; at least 40 percent are current visa-holders. On any given day, we have just under 300 postdocs on the two campuses in nine of the schools and colleges. Since there are no cycles for hiring, postdocs come and go every month of the year. Most of the postdocs are paid by grants, including fellowships. In July of 2010, for example, 75 percent were on grants, 12 percent from gifts, 10 percent from other fund sources, and 3 percent were externally funded.

It appears to be almost a given that having at least one postdoc appointment is necessary to get any kind of permanent position, whether it be a tenure track job or not. This is true in academia certainly, and in many other bio-science fields as well.

2. Why are postdocs so important to the university?

Postdoctoral fellows are integral to the research effort of this university. They are many times put in charge of the labs, learning how to run a successful one. This means supervising people, managing budgets and finances, strategizing about the research, helping to write the grants that continue to provide funding, and presenting research-in-progress talks and posters to internal departments and at international conferences. What they publish adds to the prestige of this university and the knowledge of the world.

3. What would you consider the most important role in your job?

I walk a fine line in being an advocate for postdoc employment rights and career development opportunities, and being a representative of the employer and adviser to the hiring departments.  Basically, I just want to see people treated as fairly as possible on both sides. This is my major job. But beyond that, my most rewarding role is just listening to and advising as best I can these up-and-coming leaders of tomorrow. I am proud to be an advocate for those trying to help humanity.

4. What was your first job? Your worst job? If you weren’t in this job, what would you be doing?

My first job was walking Iowa bean fields for a dime an hour. I was about 8 years old. That’s what my father thought I was worth! The worst job I ever had was getting up at 3 a.m. to clean a bowling alley before my real day started. Spilled beverages, used tobacco remains, and stomach contents were the norm. Good thing I was young.

What else would I be doing? You mean if I were independently wealthy and did not need to spin my wheels for the Almighty Dollar in order to live? I would engage in the full-time volunteer ministry.

5. If money were no option, what changes would you make in the program?

I would add a career adviser, a training coordinator and a budget for providing travel grants or other means to postdocs for career development.

Amsterdam to CU Boulder, by rail, boat, bus and bike

Send your thoughts and suggestions for the Newsletter.
END_OF_DOCUMENT_TOKEN_TO_BE_REPLACED