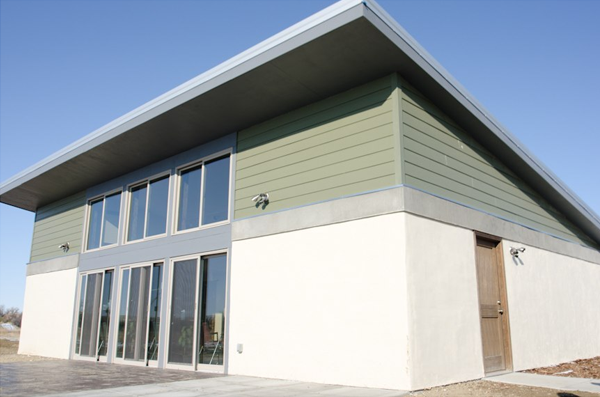 Tom Bowen has worked with Good Earth Lodges to develop an organization that employs tribal members to manufacture compressed-earth blocks and construct energy-efficient, low-maintenance homes on the Crow Reservation in Montana. The homes absorb the sun’s heat, which is then radiated as interior warmth, saving hundreds of dollars each month in energy costs. Photos courtesy Mortenson Center of Engineering for Developing Communities 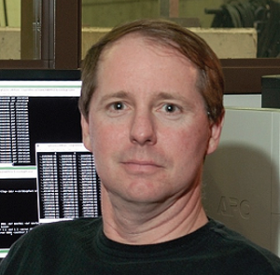 Life on the Crow Reservation in Montana can be brutal. Unemployment is at 40 percent to 60 percent with few long-term jobs available, and minus-45-degree temperatures make winter nearly unbearable in the tiny, modular trailers that often house as many 10 people. Heating bills alone can creep toward $600 a month.

Now a partnership between the tribe and the University of Colorado is working to change conditions on the reservation, which sits just southeast of Billings. Tom Bowen, the director of Sustainable Housing Projects for the Mortenson Center in Engineering for Developing Communities, is helping develop a construction organization that builds homes using compressed earth blocks made from clay found on the reservation. While a few experts such as Bowen work as advisers, the tribal company -- Good Earth Lodges – employs tribal members to manufacture the blocks and build the energy-efficient structures.

The houses cost a bit more initially, but the long-term expense to the homeowner is significantly lower. Energy and maintenance costs have been reduced. Early modeling estimates suggest energy payments in winter months will be 20 percent of what they’ve historically been. 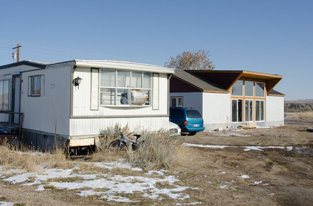 “This is a phenomenal project and it’s heartwarming for me to be able to engage in this project. I’m out in the field much of the time, working with people who are glad to work with me – most of the time – and I get to work with my hands. I’m fortunate that I’ve been given this opportunity,” said Bowen, who came to the university in 1995 after he suffered a broken neck and back in a construction accident. He earned an undergraduate degree in economics and environmental studies then went on to earn his master’s degree in civil engineering with an emphasis in water resource management.

While working in the water resources laboratory and later in the earthquake engineering lab, Bowen got to know Bernard Amadei, the director of the Mortenson Center and founder of Engineers without Borders. Amadei was working with the Bureau of Indian Affairs (BIA) on a project and needed technical assistance assessing soil, so he contacted Bowen.

“When the sponsor found out I had project management experience, and experience as a builder, I was sent me to the reservation. When I arrived, I put on my tool belt and started working with the guys, side-by-side,” said Bowen. “That made all the difference to them. And that’s the tone I’ve taken with the project.”

1. How did the partnership with the Crow Reservation and Good Earth Lodges come about and what is your role? 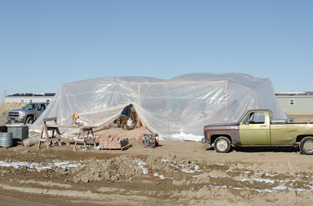 Bernard was approached by the BIA because of his geotechnical experience. They wanted to make sure the soil was compatible as a building block. Good Earth Lodges wanted to become a more formalized house-building component of the tribal authority, and I work directly with them developing this organization and helping them with project management, site identification, and architecture and engineering. The name is important because tribal members consider the Earth their mother, and the mother is the most important person in a Crow household. The perception of a lodge rather than a house takes on a higher and better connotation because it’s more structurally sound. This is a participatory approach where we engage the community, but we’re also fully involved. I’ve got four students currently involved, as well as two former students, one acting as a contractor and the other who is leading the continued testing of blocks and mortar.  We have people involved in the lifecycle analysis of the houses, energy efficient modeling, soil and structural work, mapping, and assessing the current status of the houses on the reservation.

When construction started stalling for a number of reasons, I got involved more directly and now am directing nine different aspects of the project. The bigger piece for us is that the tribe has embraced this from the sustainability perspective. We’re not talking about creating jobs. That’s problematic, particularly on reservations, because they see jobs as temporary solutions to a problem. I talk about creating careers. The tribe is doing almost all of their own work and we want it to evolve so that they are doing everything in-house and I’m out of a job.

2. How was the decision made to craft earth blocks and how are the ones on the Crow Reservation different from traditional adobe blocks? 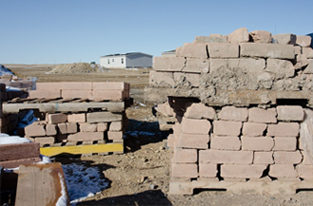 The Division of Energy and Mineral Development works with tribes to identify resources to enhance their financial and economic stability and to give them long-term options. Historically they’ve been focused on extractive resources like coal, gas and oil. But they discovered a particular type of clay on the reservation that they believed would work well as compressed earth blocks. The head of the office, the tribal chairman and someone from the BIA were chatting about what they could do with the clay and they came up with the idea of building houses. There are of all types of clay, some good, and if you own a home on the Front Range, some of it bad. When expansive soils get wet and swell, they’re not good as building blocks. They needed to understand the properties of the clay, so they came to us. Bernard had a student doing some of the work, and I got involved overseeing the student and understanding what he was working on and the properties he was exploring. I began to look at how we could make the right building component, using the material they have and enhancing it. Montana has diurnal swings of 50 to 60 degrees in the course of a 24-hour period and the climate is wetter. We needed a block that was freeze-thaw stable. Six or seven days a year the temperature hits 45 below, and we wanted energy efficiency. I got involved in determining the mix: how much was clay and how much was sand. We added Portland cement to stabilize the block against moisture.

Adobe has been around for 6,000 years and is the ideal element for its capacity to breathe and maintain a consistent temperature over a long period of time. We’ve studied it more than it’s ever been studied, but we’re in an area where it hasn’t been traditionally used. We’re not in the dry southwest. And we’re designing as though we’re building in a seismic zone. The reservation isn’t in a seismic zone but wind load has a similar effect. When we started this, we were probably the first to use adobe blocks that far north.

3. What is the status of the program now?

Six homes have been completed and five more are underway in the middle of the Montana winter. We have to build tents over the homes to get the temperature above 50 degrees for the mortar to cure properly. From an efficiency standpoint, that adds costs, but it gets people working in winter. We find other cost-saving measures. We use far less concrete and save money in architecture and design. We’re not building custom homes: they picked a model from the three we presented. The benefit is that people are embracing the houses as their own and they’ll put sweat equity in and do their own maintenance’

Now Good Earth Lodges is looking at where housing should go and the infrastructure needs of developments and multifamily housing. They’re talking about more comprehensive community and economic development planning, using the blocks to build retail centers.

4. What are some of the challenges you faced on the project?

There were cultural challenges. When I first got involved, it appeared there was a work ethic issue. They value family far more than they do an opportunity to work, which flies in the face of our culture. We put our kids in day care so we can go to work, but they have a different perspective of what matters. I have to remind people, particularly federal funding agents, that it’s a different culture. Put yourself in a guy’s shoes. The man of the house works. What if he has a chance to work for a few days and he comes out of his house and sees a big elk bull? The thought process in his head is: I might have work for a few days that will give me money, or I could shoot that elk and know I’ll be able to feed my family for the winter. The choice to him is obvious and very different from the choice we would make. So how do you build an appropriate incentive program to encourage them to work faster? The only way I’ve found to do that is offer steady work or a career. I had to understand and figure out the right incentives to encourage participation at a higher level, and they’re getting there themselves.

The climate has been ugly. We had a nasty year last year with the worst snow in 40 years and then thawing and flooding that shut us down for six weeks and isolated parts the reservation.

But these are challenges you work through. The triangle of funding agent, tribe and us all had different measures of success. The funding agent wanted 15 houses to be built and I’m trying to tell them that quality is better than quantity.

It’s all working though. The design is passive solar with an interior wall that absorbs the heat and radiates it later. About a week after the first family moved in, I was driving home from the reservation and got a call from the project director for the Crow Tribe, Larry Lee Falls Down. The family called Larry and said the house was too hot, even though it was 13 degrees outside. The furnace was off and the door was open. I told them to buy some shades to regulate the heat. They had no idea how to deal with it because they’d never experienced a warm house in winter. I chuckled for the next 15 miles. What a wonderful design! What a wonderful thing we’ve been able to do.

Later, I saw the family’s energy bill. It was $132, but in reality, they’re probably only using $40 a month to heat the house.

There are huge next steps. Workers drive old trucks that get 10 miles to the gallon but drive 120 miles round trip to get to work. We have to locate retail centers and run mass transit. Initially, they were resistant to this but if they want their culture to survive, they sometimes have to take steps they don’t want to take.

5. Can any part of this model be replicated in other areas?

Absolutely, and not just on other reservations; there’s talk about exporting this model internationally as well. It’s not just the material or the project model, either, it’s the engagement model, the “let’s sit down and listen” model, and the sustainability model.

Send your thoughts and suggestions for the Newsletter.
END_OF_DOCUMENT_TOKEN_TO_BE_REPLACED