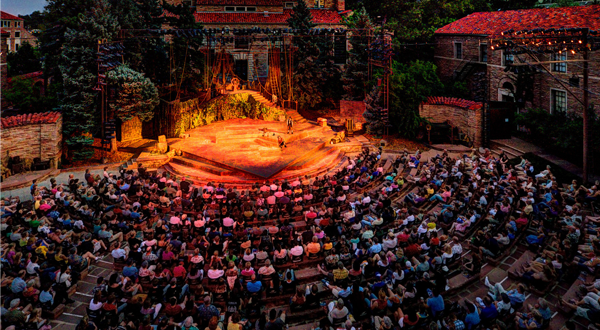 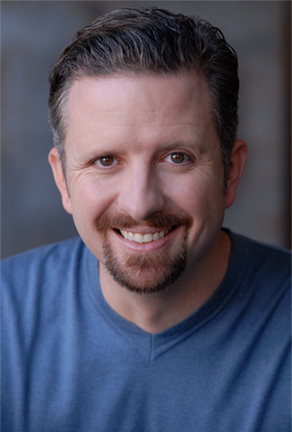 In just over a week, the Colorado Shakespeare Festival (CSF) begins its 2013 season, the first under the leadership of Timothy Orr, interim producing artistic director. He started with the festival as a performer in 2009, joined the staff in 2011 and stepped into his latest role in February after the departure of Philip Sneed, now executive director at the Arvada Center for the Arts and Humanities.

Orr helped establish the festival’s acclaimed Shakespeare in the Schools’ anti-bullying program and launched the CSF School of Theatre, now in its second year. He has taught acting and voice at CU-Boulder, CSF’s home, and his resume also includes performing, producing and teaching stints across California.

The start of rehearsals last week marked a significant milestone for him, but nothing will compare to the curtain going up next week at the Mary Rippon Outdoor Theatre.

“Opening night of the whole festival is always the most exciting moment, no matter what the show is,” Orr says. “There’s nothing quite like it. There’s so much energy, so much time and effort that you’ve put into it. It’s such a big celebration. We’re all there together. After opening night, people start to go home. But that night, everybody who worked on it, all the leadership, the dean, all of us who’ve worked all through the year – it’s very emotional, very powerful. Like a rocket on liftoff.”

After the season, Orr will likely trade the rocket for a mountain bike, his recreational vehicle of choice when he finds the free time. He’ll also enjoy a busman’s holiday, catching up on other theater productions in Boulder and around the state.

1.       Festival ticket sales are outpacing last year's by $65,000, including strong sales in the Denver area, and traffic on the CSF’s newly redesigned website is up. What made this happen?

I think that with marketing, production, development, even artistic direction, we’re coordinating everything. We take a lot of meetings together and talk to each other a lot more. Getting information early, early, early is important. We’ve had content for all of our marketing materials six months earlier than we had in previous years. We put tickets on sale in November rather than in March.

We’re just very much ahead of the game. And we’ve been getting a lot of attention. There’s been a change in staff and leadership, and a realignment with the university, so we’ve been very fortunate.

There have been some really key players who have called me up and said we want to do more for you. Some of our corporate sponsors have been great about renewing and raising their levels of support. Elevations Credit Union is really committed – we’ve been partnering with them in some of our joint marketing efforts and sweepstakes.

We had the Spring Into Shakespeare program this year. David Boonin, associate dean for arts and humanities, had this idea from Yale. Every week for this past semester, there was something Shakespeare-related going on. He asked all the departments to participate. Shirley Carnahan, an associate professor, put it all together.

It’s just been a lot of small efforts, but it’s all been really well coordinated.

2.       These are challenging times financially for higher education institutions and the arts – especially live, local companies. Given that the festival is the latter linked to the former, what is required to survive and thrive in this day and age?

I think it requires being focused and having your priorities straight. We have to focus on the fundamentals of what we do. There were a lot of projects we had scheduled for this summer, and I backed us off on some of them so we could focus on filling the Rippon, which is our number one goal.

There was a potential for a co-production with a Shakespeare festival in Prague. I felt that would have drained a lot of our staff hours. So I decided early on to postpone that. We were going to send another co-production of “The Complete Works of William Shakespeare (abridged)” to Lone Tree after it closed here; I also decided there wasn’t going to be enough bang for the buck. Again, it would have been a big drain of staff hours.

3.       In what ways does your experience as a stage performer affect your work as the producing artistic director? 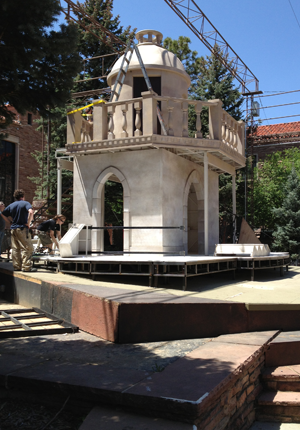 I feel very comfortable in a lot of the decisions that I’m making to help protect the art – and in some of the decisions I’ve been making to economize, to streamline the art and how we’re making it. I know exactly what these actors and directors have to go through to get so much work done in the three weeks of rehearsal we get for each production. We get the job done in three weeks, and that is tricky. You’ve got to be very well organized. There’s not a whole lot of time to, quote unquote, find it in rehearsal.

We hired approximately 120 seasonal employees just for the summer, including actors, directors, designers, crew, technicians, carpenters, stitchers, people who make props, painters. The list goes on and on. So that’s a lot of preparation. Mountains of information needs to go to all these people in advance of their first day of work so they can hit the ground running.

Hiring started last September and monthly production meetings have been going on since January. These people are all over the country -- FaceTime and Skype are the best things that ever happened to regional theater, I swear.

4.       How does Shakespeare’s work speak to today’s audiences?

That’s a good question for our audiences to answer. I’m always unsatisfied with the answer I give. The history plays had a specific relevance to his audience that we don’t quickly relate to – they were about actual historical figures of the time. But the plays about love and loss and violence and revenge and power and ambition – all of these things must have the same timeless relevance for our audiences as they did for Shakespeare’s.

Shakespeare was not an emotional genius. He didn’t feel anything we don’t feel, he’s just a genius at expressing it. Whether it’s falling in love the first time or losing a parent or having a child – all of these experiences that add up to life. He was a genius at expressing that, and I think that’s true of any artist.

Comedy for breakfast, tragedy for dinner.