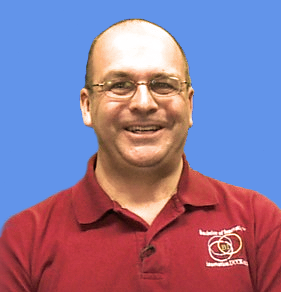 Chamillard is an associate professor of computer science at the University of Colorado Colorado Springs. He holds degrees in electrical engineering, computer engineering and computer science. He previously taught at the Air Force Academy and also has worked in private industry.  In 2003, he joined the UCCS faculty and teaches game design and development.

His research includes computer science education, and he sometimes uses his classrooms to determine the effectiveness of new or modified teaching/learning ideas. He also has worked with the Bachelor of Innovation team at the university as they “implemented some pretty cool ideas within that family of degrees. My focus is on the Bachelor of Innovation in Game Design and Development (GDD) degree … Our degree is different from the other game development degrees from other universities in large part because of the innovation and entrepreneurship components that are included in it.”

I spent six years teaching at the Air Force Academy before retiring from the Air Force in late 2002, and that experience showed me that I definitely wanted to get a tenure-track position after retiring. In early 2002, I applied for a number of tenure-track positions (including a position in the computer science department at UCCS), went on a number of interviews, and was getting some good job offers, but decided that I really wanted to return to Colorado Springs.

Because I didn't make the “short list” for the UCCS position, I decided to give up continuing as a college professor and started looking for an industry job. During my networking for my job search, I contacted my prior department chair from the Air Force Academy, who was running his own company. He didn't have a job to offer me, but he did contact a colleague in the computer science department at UCCS in his field and put in a good word for me. Long story short, I ended up getting hired into my current position.

I love teaching so much that I can’t believe I ever considered giving it up just to live in a specific place. Luckily, it all worked out in the end.

2. How did you choose programming as an interest? Are you still developing games with your sons?

I always liked science and math as a kid, and my high school had a computer lab so I taught myself how to program once I got there. (Yes, this was before PCs!) I guess I just really like the logical, detailed approach we use in the STEM fields. For my degrees, I worked my way from electrical engineering through computer engineering to computer science, and I thoroughly enjoyed learning about each of them. Even for the game development I do, my focus is on the programming and, to a lesser extent, the design aspects of the games. I generally leave the art and music to someone else, and that's a good thing! For teaching, I thought it would be an interesting thing to try, and once I got to do it, I realized pretty quickly that teaching is what I’m meant to be doing.

I worked for 5 1/2 years as an indie game developer in a company I started with my two sons in 2007. We’ve since closed the company -- it's strange how your kids can grow up, get jobs and move out and on to other things -- but it was a great experience. The three of us were equal members in the company, so my sons could outvote me on company decisions (insert appropriate expletive here), but it was incredibly cool working with my sons in a professional way. We even won some contracts to develop games for a variety of customers and released a commercial game as well, so that was great. I share both good and bad stories about our company experiences with my students since the main goal for our Bachelor of Innovation in Game Design and Development is to prepare students to become indie game developers.

3. You are the first UCCS prof to develop and offer a MOOC for students around the world. How hard/easy was it to develop?

My MOOC is Beginning Game Programming with C#, which is designed to teach people who have never programmed before how to start programming video games. Because the course is only eight weeks long, the students certainly won't come out the other end as professional game developers − that takes years, not weeks − but they'll have the foundational ideas they need to continue their studies in the area.

The course was shockingly hard to develop, especially since it's based on a course I already teach at UCCS. I'm sure that's in part because I'm very aware that I'm representing UCCS and the CU system on an international level rather than just in my classroom, so I've spent a lot of time trying to make the course as good as it can possibly be rather than "good enough." My course was also the first course opened up for enrollment in the U.S. State Institutions category on Coursera, and I want to make sure the learning experience for the students in the course is as good as or better than in the other courses on that platform.

The fact that I had more than 21,000 students enrolled on the first day of the course also impacted my desire to do a good job. That high number was only possible because people throughout the CU system worked so hard to get the CU campuses onto Coursera. Even at the historically low MOOC completion rates, it would take me more than 45 years to get the same number of students to complete my on-campus course.

I'm even more excited about the fact that I teamed up with a group of three UCCS Game Design and Development majors over the summer to build a Programming Party game that the MOOC students can play to motivate them to complete the required assessments and optional activities in the course. Students who complete those course activities get to explore the story in the game, amass hordes of gold and play 11 different mini-games.

The MOOC started Sept. 16, so it's still early, but things are going fine. My biggest lesson learned so far is that I don't have to feel compelled to answer every question or comment posted on the discussion forum, because that would quickly become unworkable; instead, I just need to wait a few minutes and one of the other students in the course will respond. That approach goes against my nature as a professor, but it's the only workable solution at this scale and it seems to be working pretty well.

4. What do you consider the upside of MOOCs? What are the downsides?

I think the most obvious upside of MOOCs is that they open up the availability of the course topics to orders of magnitude more students. There are obviously lots of resources available to people who want to learn new things, but there also are many people who prefer a little more structure to their learning experience than "surf the Web or read a pile of books until you've figured it all out."  MOOCs give tens or hundreds of thousands of people access to that structured learning experience.

I really can't express how exciting it is to me to have so many people pursuing beginning game programming with my help. I've heard lots of people questioning why anyone would want to do a MOOC, usually in the context of "How do we make money doing it?" For me, though, making money isn't the point. The goal is to open up the exciting world of programming to so many people who might not be able to explore it otherwise.

The biggest downside of MOOCs is the fact that, on this scale, we really need to have the students grade each others' work rather than have the professor or even a mob of TAs do the grading. It's certainly true that MOOC students don't get the same personalized one-on-one attention they get from the professor in other (at least small enrollment) environments, but since I want my students to be independent learners anyway that's of less concern to me personally. I think it's probably true that the MOOC experience for a student isn't as rich as an in-person experience or an online experience with a limited class size, but the choice for many MOOC students is the MOOC or nothing.

5. Do you continue your gaming interests outside of the classroom?

Probably not surprisingly, I do manage to find some time every week to play video games. I'm a driving game fan, so that's what I play almost exclusively. Yes, I'll admit I actually have a driving seat and a driving wheel/pedal combo that even has a clutch and a shift gate.

Over the past (unspecified number of <grin>) decades, I've pursued a variety of athletic interests. I've completed a number of centuries (100-mile bike rides), marathons and shorter running races (including the Pikes Peak Ascent three times) and triathlons of various lengths. My biggest athletic accomplishment is completing an Ironman-distance race: A 2.4-mile swim, 112-mile bike and 26.2-mile run makes for a long day!

Finally, I've just started (re-)learning to play the guitar. I played for a few years as a teenager, then put my guitar away as family and work took up most of my time. My daughter recently asked me to play and sing at her wedding, though, so I dusted off my old Yamaha acoustic and started back at it. The cool thing is I'll be taking the guitar I had with me the night I met my wife over 34 years ago and will be playing it at my daughter's wedding. Now if I can just learn to play like Paul Simon in less than six months, I'll be in good shape. How hard can that be?