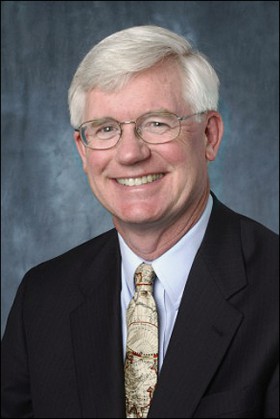 Thomas Riis' passion for history and music is apparent, especially when he's talking about his research specialties: American music and African American music.

The Joseph Negler Professor of Musicology was hired in 1992 to teach at the University of Colorado Boulder and also was named director of the relatively new American Music Research Center at the College of Music.

The center is fundamentally an archive – a collection of recorded and paper materials – that also serves the public through events and outreach. Along with sharing resources with staff, faculty, scholars and the public, the center conducts events and programs concerning the collections – everything from lecture series to publications to concerts to symposiums attended by national and international scholars.

When he's not singing, playing or conducting with small musical groups, Riis enjoys hiking and traveling to "exotic and faraway places. I'm a big reader of histories and murder mysteries and a fan of old, silent films. I'm also an enthusiastic 19-year volunteer with the Boulder County AIDS Project."

His favorite accomplishments include "having thrown several fabulous surprise parties for important people in my life around the world and having visited every state capital in the United States, except Juneau, Alaska."

Recently, the American Music Research Center made news for its acquisition of the Ed Burke Collection, which includes about 1,400 reel-to-reel tapes containing hundreds of hours of performances by major musicians of the big-band era. The collection, spanning the 1930s through 1960, also is replete with photos and other memorabilia from such music legends as Glenn Miller, Louis Armstrong, Duke Ellington and Tommy Dorsey.

1. How does the university go about choosing what goes into the archives? What kind of things does the archive find valuable?

The center is co-owned, if you will, by the College of Music and CU Libraries. Our local librarians have trained me never to say "yes" until I talk to them. It has to be collaborative. I'm a trained historian and my colleagues in the libraries handle collections directly and field questions about accessibility and preservation.

This is constantly a process of education for me and would-be donors. If someone brings to me an old set of player piano rolls, I have to ask, "What's on the rolls?" and "Do we have a way to play them?" What's the point of having a collection if there is no way to make them audible?

It's like Christmas every day for me. I come in and there's a new question or new collection being offered to us. I kind of feel like the Car Guys. People come in and say, "Uncle Bob just died and he left me a box of material and it looks like this and I think it sounds like this. What is it and what can I do with it? Can I make money from it or how do I get rid of it because it's taking up space?" In some cases, a spouse or someone close to a person had a special interest and that person wants to honor that interest, to keep the materials together.

Of course, people think anything they own or their parents or grandparents owned has inherent value. That's not really true. It might be true for you personally, but to the great world out there, it's subjective. So we have a slightly different set of criteria.

Basically, an archive is a collection of rare or unique materials. These are generally not lent out as we would do at a library. Their purpose is to remain in the collection in the best possible condition for the longest time so the largest number of people can benefit from them.

One sought-after feature is materials that are obviously the working materials of a great artist, things like sketches or manuscripts. These could be musical sketches, or in the case of a writer, the first draft of famous novel or poem.

We want things that are rare or unique, not items that have necessarily been published, and certainly not items that have been published in great quantity. This can be counterintuitive. Say you're the granddaughter of a famous composer and you have all the awards your grandfather received and all the exquisite first-edition copies of the publications. But these were probably produced in great number, manufactured in the thousands, even millions. That's not what an archivist necessarily wants. But if you have dusty, dirty, scribbled-on sketches – something a guy on the street wouldn't want in his house – then the archivist would say you have something exciting.

2. What are some of the interesting pieces you have at the center?

We have collections of old music that were played live to accompany silent films. We have a collection of African American women composers, from the early- to mid-20th Century that's fairly rare.

We have lots and lots of what is called Tin Pan Alley music. The name was coined by a journalist who was observing the weird sounds he was hearing from buildings on a street in New York where a lot of music publishers lived in the 1890s to 1930s.

The publishing houses all had a big cheese who hired piano players to arrange tunes. People would come in and say, "I have a melody I think your company should publish." If the big cheese thought it was a little thin, he might hand it to his pianist – called a plugger – and have him add some chords here and there.

If he thought it was a good song, the publisher might pay $50 to the guy who brought it in. And if it turned out to be a successful song, the company would make hundreds, even thousands of dollars. Music then sold for 15 cents a sheet. George Gershwin and Richard Rodgers were just some who served their time as pluggers.

Irving Berlin, the greatest of all American Tin Pan Alley songwriters, realized that if he were the songwriter and publisher, he would get all the money. After his first couple of hits, he went into business himself; hence he became a famous songwriter and wealthy man.

We have something in the area of 100,000 individual printed song sheets from this period.

We also have some wonderful materials from the 17th Century. We have about 500 Colonial-period oblong hymnals. When I started teaching 30 years ago, you could pick them up for $5 or $10; now they are worth easily in the several hundred dollars. These are published tunes, one per page, but if I were to find a manuscript book, it could be worth as much as $2,000 or $3,000.

3. How did you become interested in music and teaching?

I started playing the cello at 10. I always thought it was a plot by mother and my third-grade teacher and my music teacher to keep me busy. It got me out of the classroom a few hours a week. I played the cello, even though it was bigger than me, because it was the only instrument left.

Once you start, you naturally continue for a while. I enjoyed music. Then I got to be in larger and larger groups – ensembles and orchestras. You reach a point where you say, "I guess I could do other things, but I hate to give it up." That's generally when real dedication kicks in. I went to college, knowing I wanted to be a music major, but not quite knowing that I would end up on the academic side of it. I made that decision as an undergrad. Then I went to grad school, and at that point the career path becomes very clear. The only places hiring Ph.D.s are universities.

4. You are a specialist in musical theater and 19th and 20th century music. Why these areas?

I was reading about a very unusual composer named Will Marion Cook who was a second-generation African American college student. That was unusual; he also attended the same college I had gone to, Oberlin College in Ohio. He studied composition with a famous European composer, Antonin Dvorak, and he had given advice to a young protégé, Duke Ellington. Cook had also taken his band to Paris in 1919 and 1920 and some of the most distinguished critics gave the band rave reviews. I knew these other famous names but I had never heard of Will Marion Cook. As a graduate student, I was thinking about a dissertation and every instinct in my body was saying this was a huge uncovered topic.

That lit a fire under me. Cook, who passed away in the 1940s, had a son, Mercer Cook. He had been a professor at Howard University. On a whim, I looked him up in a telephone book, then sent him a card, asking to talk to him about his father. I got a lovely response from him, saying that anytime I was in Washington that he would love to talk with me about his father. That put me on Cloud 9. I scraped enough money together to drive to Washington, D.C. He was a very distinguished man, a professor emeritus in French, and a diplomat, and he wanted to know more about his father, whom he did not grow up with. That's all it took. My first book is actually based on Cook, in the context of African American musical theater before anyone ever knew there was such a thing.

5. Are you working on any current projects?

I'm very interested in the music and career of Paul Robeson. But I'm in the very preliminary stages of exploration so can't really provide details. Robeson was one of the most phenomenally accomplished figures in American history. He was a multiple-lettered, All-American athlete, a major stage and film actor, and he recorded hundreds of pieces. He was as famous as Barack Obama is now or as Muhammad Ali was at the time of his greatest fame.

Send your thoughts and suggestions for the Newsletter.
END_OF_DOCUMENT_TOKEN_TO_BE_REPLACED