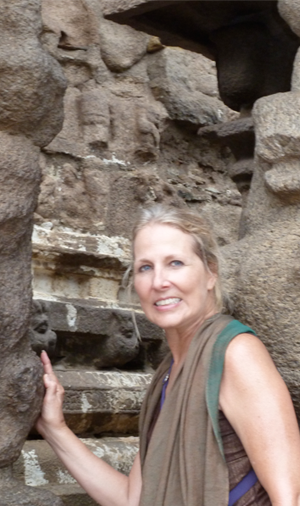 Years ago, if a young girl was bullied by female peers, parental advice would more than likely be to “ignore” the perpetrators.

But she knows that today’s youngsters need more than placating; they need to learn how to deal with bullying incidents, which have become more volatile, more viral and more violent than ever.

People who know her now would never guess that she was “a follower and oftentimes was a target of bullying” in junior high school. “I remember to this day what I was wearing and what I felt. I’m a woman of 59 and I can still remember it,” she said. She also was the victim of sexual harassment. “There’s a time to stand up and say, ‘I’m not going to take it.’ I found myself having to learn how to empower me. Then it became a mission of how to empower other women, too.”

Williams is associate professor of counseling and human services in the College of Education at the University of Colorado Colorado Springs. Before returning in 2001 to UCCS – where she previously earned a master’s in counseling -- she spent 11 years as a teacher in different school districts and 15 years as a school counselor, mostly in Colorado schools.

Along with her research on bullying and adolescent girls, Williams is heavily involved in the Smart Girl program, which teaches young girls about bullying and sexual harassment and how to effectively deal with those issues in personally comfortable ways. In addition she’s a community activist, and is writing about and researching mental health in rural America.

During a sabbatical last year, she and her husband traveled around the world, visiting 12 countries. Williams said the trip was enlightening: She loved Costa Rica for the relaxation; South Africa for the beauty, the animals and the wine; Ghana for its people; and she found India’s poverty to be intense and its temples from 700 B.C., amazing.

1. How are you involved with Smart Girl and why is the program important?

The program for adolescent girls is about building confident, self-reliant, empowered young women. Through my encouragement, a program for boys has been developed, too. Through activities, participants learn how to problem-solve and communicate better, how to manage moods, how to work as a team, and understand what you have control over, what you don’t have control over. We also talk about sexual harassment, which is another area of research I’m doing. If you don’t teach them how to resolve these issues or how to refuse peer pressure, then how are they supposed to learn it?

Most research is about teaching individual girls, mentoring them one-on-one, but this program mentors adolescents in groups. I train the guides and coaches, and they, in turn, mentor a group of 10 to 12 girls. It’s wonderful to watch these little girls blossom. There is evidence that the program supports change in young girls and supports career decision-making. The program started in Denver in 1999; I’ve been with them since 2002.

2. How does bullying by girls and boys differ and how can it be combated?

Boy bullying typically is overt, in-your-face, physical and aggressive. Girl bullying is subversive. Usually those that bully are very attractive and popular and they have a lot of power and control over that dynamic. They pick on girls who might not be as assertive or attractive. Boys bully one-on-one. Girls bully collectively: “Oh, can you believe she wore that to school today?” It manifests into destructive behaviors, social aggression and relational aggression, and it creates relational divides. I feel sorry for the little girl that’s been sick for a week because she comes back to school and doesn’t know who her friends are going to be because so much has changed. 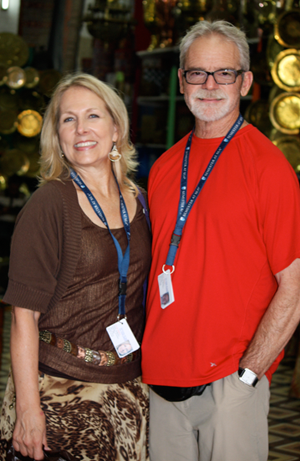 Williams with her husband, Ben, in Morocco during their 12-country traveling adventure last year.

Our Smart Girl curriculum includes activities to understand bullying and what to do about it. More than 80 percent of adolescents see bullying on a regular basis – daily or weekly. They see it but don’t know what to do about it. Not every kid is empowered or assertive enough to say “stop it.” We give them several options through the acronym A.C.T.I.O.N. “A” stands for “assert yourself.” In middle school I could not have been assertive but I could do “C,” which stands for “create a distraction.” We teach them to be an “upstander” not a “bystander” by standing up for bullied kids in a way that is comfortable for them. We give them skills rather than assume they are going to pick them up along the way.

Bullying is more prevalent, especially cyber-bullying because people can do it anonymously. Adults are more aggressive on the phone than when face-to-face with another person, and our research has found that kids are replicating some of the same behaviors.

3.  Bullying is about power. Hasn’t some form of bullying been around for ages and is it possible to change human nature?

I totally believe in the ability to create change or I wouldn’t be a counselor. What we’ve seen in girls is pretty powerful. I’ve seen it in myself. I’ve heard over and over from the girls who are guides and coaches that because they teach it, they start living it. When they live it, they embrace the concept of non-bullying.

4. What are the other girl issues you’ve studied and what have you found?

Another aspect is sexual harassment bullying. Girls always are surprised to find out that while 86 percent of girls have been bullied, 79 percent of boys say they have bullied. Girls bully boys, and more importantly, boys bully boys, especially using homophobic language.

The whole concept of body image is hugely impactful for girls. We’re seeing many more girls with disordered eating, if not eating disorders. In our activities, we approach body image carefully. Girls can say positive things about what’s on the inside, but they can’t compliment themselves physically. Our theory is that the younger we teach them, the better chance they have to be strong, confident and empowered.

5. Earlier in your career, you received “middle school counselor of the year” awards, and very recently, you received the Counselor Educator of the Year award from the American School Counselor Association. What are some important lessons you hope to impart?

When I won the middle school counselor of the year award, I did an interview with a newspaper and they asked, “What’s next for you?” I remember thinking it was a good question. At the time, I said that I wanted to get my doctorate so I could teach people to do what I did. I’ve done that. The award inspired me to take the next step. As a counselor educator, you get to work with those who soon will be in your profession. I’m passionate about teaching because I want to model for them what they can do for kids.

I’ve had 26 years of experience in counseling and mental health. Every class I teach, I see the potential to help them become the best they can be as a school counselor and in mental health work. That’s exciting because I want other people to continue to make a difference. My passion gets them going and they think, “Ah, I see how I can use this; I see how this has value.” The desire to make a difference and create change continues to trickle down to the kids that need it the most.

Tagged with:
College of Education, research