The first time Peter Simons remembers being in a “service role” was in junior high school, when a teacher asked him to work with a girl who was shy and withdrawn. Even then, he understood that part of him was geared to trying to make the world a little bit better. His efforts continued in high school and at the University of Colorado, where he was an undergraduate psychology major and earned his master’s degree in public administration. He also holds liberal studies and elementary education degrees.

Much of his career has focused on child and youth development in varying venues that range from nonprofits to the Colorado Legislature. He also has dedicated much of his free time to child-focused volunteering: working with at-risk kids and those in the juvenile justice system, as an instructor for Eldora’s disabled ski program, in early childhood education, and serving on boards that concentrate on children and youth.

A decade ago, he took a job at CU-Boulder as director of parent relations, but within a year he was asked to run some civic engagement programs. After a few years of doing double duty, he transitioned into full-time engagement work as director of the Institute for Ethical and Civic Engagement. Under his leadership are 11 programs, with the Peace Corps being the most visible. Last year, the school ranked No. 1 in the country for Peace Corps volunteers after several years of ranking second. 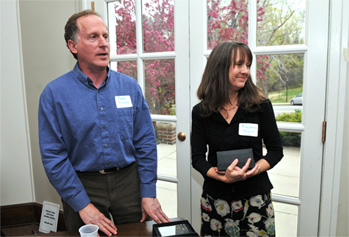 Some 117 CU graduates are serving with the Peace Corps; over the course of 50 years, about 2,400 have made the commitment. In 1961, when the Peace Corps was formed, CU provided one of the first planeloads of recruits. Graduates serve for 27 months in one of the 70 countries the organization serves, conducting service projects that range from education work to health to small business development.

“We believe very strongly that the university has a public purpose and that is to serve society,” Simons said. “We do that in both academic and nonacademic ways. As an institute, our job is to be a facilitator, a catalyst and a strong proponent to try to make that happen.”

While CU has a reputation for emphasizing civic engagement, it does not require a service component, as do some schools across the country. Personally, Simons said, he would love to see service become a requisite.

Although there’s some controversy about requiring “volunteerism,” many students relish the opportunity.

“From my knowledge, even the students who didn’t realize their classes had a service aspect, say it was the best experience they’ve ever had. It makes education so much more enriching. I’m not sure what we’d do with 30,000 students, in terms of getting them out in the community, but I think civic engagement should be a requirement.”

1. Why has CU been so successful at recruiting volunteers, especially for the Peace Corps?

CU attracts a lot of students who have the urge to serve and want adventure, the excitement of being overseas. Another reason is we have an excellent Peace Corps office here that does a bang-up job in terms of working with students. We also have in the Boulder-Denver area a very large number of RPCVs (return Peace Corps volunteers) who are active in our recruitment efforts. Quite frankly, I don’t think I’ve ever met an RPCV who hasn’t said it’s the top experience of their lifetimes, or one of the two top experiences.

We also have a student body that is very receptive. We use every means available within our budget to get the word out about the Peace Corps, from large events twice a year, to monthly general information meetings, to using every kind of social media you can think of. We put ads on city and CU buses, print fliers and place yard signs all over campus. We moved into the No. 1 position last year, and as far as I can tell, our current recruitment activity has been just as strong or stronger than last year.

2. While Peace Corps may get more media coverage, you have other programs at the Institute for Ethical and Civic Engagement. What are they?

The institute’s mission is to make civic engagement a core part of education at CU so that all students are doing service at one point or another. As part of academic affairs, we work very closely with faculty. We provide money to faculty to develop new courses or redesign existing courses where service learning or civic engagement is woven throughout the curriculum. In that way, students learn content in the classroom – say, in education psychology – at the same time they’re placed in the community working with kids in applicable programs. They can apply what they are learning in the classroom with what they’re learning in the community and vice versa. If it’s done well, it’s transformative. You’re not just sitting there being an empty receptacle where information is being poured into you and then you spit it back up on a test or a paper. You’re actually using what you’re learning and applying it.

We also have model projects, which are a more intentional way of institutionalizing civic engagement on campus. We find a department, school or college that has a chair or dean who is enthusiastic about this, and also has a core group of faculty who want to do it, and has money to match ours. We have six or seven of these models right now.

We also provide education training, and we put on workshops, conferences, symposiums.

Another program is the Puksta Scholars program where students who are high-achieving and invested in the community get a large scholarship from us in return for them being involved in developing an intensive civic engagement project. We also created a paid summer internship program so students can follow their passion but don’t necessarily have to work in service jobs to try to earn money for rent and food and save up some for school. These are fully funded outside the university through foundations and donors.

We were one of the first universities affiliated with Teach for America and we also have a service learning abroad program, since as many as 25 percent of our student body studies abroad. Another program we oversee is called SWAP (Student Worker Alliance Program) and is a student-run program that matches students with service workers on campus who are basically an invisible population that holds the campus together physically. Students receive English as a second language training then help workers as needed.

When we started the institute, we found there were excellent programs on campus, but they were scattered and small, and students self-selected into them. The programs have definitely proliferated in the past 10 years, but by no means do we reach all of campus. Our estimates are that we have about 13,000 students who are serving. Some departments have no interest in this, but others do. Engineering has a very strong program with Engineers Without Borders, and the Leeds Business School is trying to make civic engagement a requirement for all business students. Architecture and planning also has a policy on its books that will be implemented so that all students have to be involved in service.

3. Why do you feel civic engagement is important for CU? For students? For the communities you serve?

The idea of service and being an engaged and informed citizen is one of the core values and core principles of democracy. For our society to be healthy and function well, we need a citizenry that’s engaged and informed. Unfortunately, that is not quite the case in many places. We also think that giving back is a core value. We also believe CU has a very strong public purpose. The university is an economic engine for the state, but another part of service is doing a whole variety of things to make the world better. We think it’s very important for every CU student to have these values and attitudes, and develop the skill sets to do so. When they leave here, they will be civically engaged and socially responsible citizens who understand that you can’t just take, you have to give back and we all have a responsibility to do that.

4. If money were no object, what would you add to or change about the institute?

We’re a small institute and very different from other science-based institutes on campus, especially in terms of staff and funding. We definitely push the envelope when it comes to doing what we can with funds. Right now we’re evaluating programs to decide whether to continue some or go in another direction. We’re always looking for a big endowment. Some schools that have institutes like ours get $5 million or $10 million. Duke just got $30 million. If we had the money, we could hire civic engagement coordinators in departments, schools and colleges. These people would train faculty, provide resources and help with course development. Programs on campus now that have these coordinators are doing very well. With more money we could create an infrastructure throughout campus so this whole effort is sustained and institutionalized.

5. Is volunteerism changing since the economy has deteriorated and both young and old have found it harder to find work or well-paying jobs?

I would venture to say it has changed somewhat. For people who have been laid off, there may not be job opportunities in what they were doing. If they’re inclined to be civically engaged, they may volunteer to gain experience. We have nowhere near the number of people volunteering that need to volunteer across the board. On the other hand, some people may be so preoccupied with trying to find a job and trying to make ends meet, they don’t have time to volunteer.

Send your thoughts and suggestions for the Newsletter.
END_OF_DOCUMENT_TOKEN_TO_BE_REPLACED