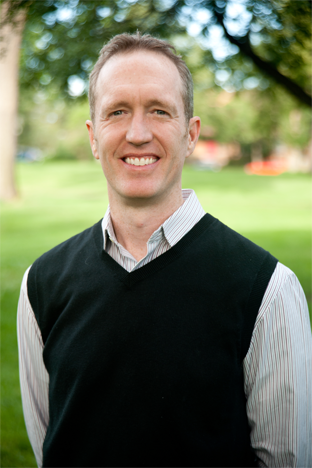 Have you ever laughed at an epic FAIL? Or that klutzy moment when someone awkwardly falls down? Why was it so funny? Peter McGraw has traveled around the world in hopes of finding the answer to that question. McGraw directs the Humor Research Lab (HuRL) and co-directs the Moral Research Lab (MoRL) at the University of Colorado Boulder where he’s an associate professor of marketing and psychology at the Leeds School of Business. Along with his humor research, he studies decision making and consumer behavior.

In college, he started out as an engineering student, but the study of human behavior soon turned his head. He had enjoyed a psychology class in high school, and as a first-year undergraduate, he realized that his professors liked what they were doing.

“They were teaching interesting material, and they got to read books and hang out on a college campus. How wonderful is that? So, basically, I decided I was going to be a professor.”

McGraw studied judgment and decision making as a graduate student, and, as luck would have it, the field of behavioral economics began to take root at the same time he was graduating.

“Judgments and choices are fundamental to business, whether in marketing or management. I’ve always valued the practical applications of my research, so studying consumer decision-making made sense, even as a psych Ph.D. student,” he says.

This fall, McGraw begins his 10th year at the university.

His interests in humor and consumer behavior have meshed in one of his current projects, which investigates the potential downside of pursuing humor in marketing communications. McGraw, along with colleague Phil Fernbach and graduate student Julie Schiro, are looking at whether public service announcements (PSAs) that use humor are successful. While humor is attention-getting and often facilitates sharing behavior, a funny PSA may not result in the desired behavior change, says McGraw. “Humor can indicate that something bad – texting while driving or not wearing a seatbelt – is not a serious problem. In this case, humor can backfire.”

1. How did you choose to focus on humor as an area of interest? How does humor influence consumers?

I have studied moral decision making, trying to answer the question, what makes things wrong? More than five years ago, I was giving a talk about it and used what I thought was an entertaining example about a church that was trying to get people to attend a winter retreat by hosting a raffle with an unusual prize: a yellow, H2 Hummer. 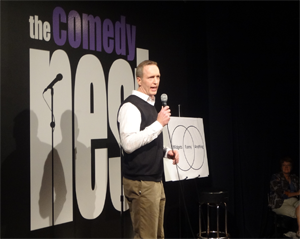 The audience laughed at the example. They weren’t as upset as I expected, and someone asked, “Why are we laughing at this? You say that moral violations cause anger and disgust yet we’re laughing.” I had never considered what makes things funny, but I quickly realized what an important question it is. Humor is something we value greatly in our personal lives; it’s been implicated in coping; and it certainly has a role in marketing and management. No one else in my field was studying it. It was a great opportunity, albeit a risky one, but an opportunity that was too good to pass up.

The question of how humor influences a consumer is a big one. Most research on humor and advertising focuses on the benefits, but I’m interested in the potential risks, especially when an attempt at humor fails or how humor may negatively affect brands. I’m most excited about examining an idea we call humorous complaining. Firms are interested in consumer complaints; they want to make consumers happy and the fact that people complain about brands to others is potentially problematic. The downside is that we don’t really like complainers, but humorous complaining seems to be a good thing. If you can complain humorously, people like you more, your complaint has greater reach, and people are more likely to remember humorous complaints and pass them on. So if your goal is to warn others, and to feel better and not have people think badly of you, then humorous complaining is a really powerful tool.

We begin the humorous complaining paper with a famous example, a YouTube video titled “United Breaks Guitars.” A Canadian musician had his $2,500 guitar damaged on a United Airlines flight. United refused to compensate him on a technicality, and he wrote a song about it, a parody of his experience. It got more than 10 million views and international press coverage, and it turned into a success story.

What I’m trying to do is take an idea – a theory I’ve been testing that we call the Benign Violation Theory – to help make predictions and to better understand how humor can be both a cost and a benefit.

2. What is and isn’t funny seems to vary by culture, societal norms, and even from person to person. How can you study humor since there are so many variables?

The same joke might be funny to one person, horrifying to another, and boring to yet another. So as part of the Humor Code project, Joel Warner and I looked at humor around the world.

The Benign Violation Theory proposes that we laugh at things that are wrong and OK, things that seem to be threatening and safe. The theory does a nice job of dealing with cultural and individual differences. What we see as wrong and OK depends on experience, values, what culture says is wrong and OK. That’s a difficult challenge for studying humor. When we conduct studies in the HuRL (The Humor Research Lab), we have to test our stimulus to make sure it’s funny with the people we bring into our lab. Once we know it’s funny, we start changing it in ways that make it more benign or make it a violation. The one kind of humor that is as close to universal as you can find is physical comedy. It’s one of the most basic ways to make people laugh.

3. The Humor Code project included a worldwide journey to study comedy, which has since turned into a book, “The Humor Code: A Global Search for What Makes Things Funny.” How did this idea come about? 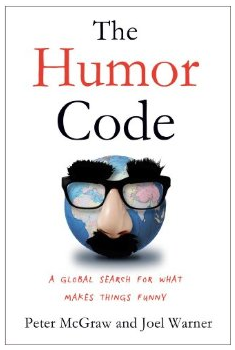 For many years I have been going out into the real world to look at questions that I am trying to answer. To understand human behavior you have to leave the lab and observe people in the real world. Joel Warner, a Denver journalist, invited me to go to the Squire Lounge to critique the comedians using the Benign Violation Theory. In a moment of hubris, I decided to go on stage and tell some of my own jokes. This did not go as planned; I bombed. It was a stark reminder that humor is a complex, mysterious thing, and to understand it, you need to see it in all its glory. Joel and I decided to team up and go on a global search to answer the question of what makes things funny. We went to Japan to understand individual cultural differences, to L.A. to watch improv and stand up, to Tanzania to try to answer the question “Why do we laugh?”, to Scandinavia to examine the dark side of humor (the Muhammad cartoon controversy), to the West Bank to find humor where you least expect it, and to New York to see how humor is made on a grand scale. Our penultimate chapter in the book tries to determine if laughter is the best medicine, so we went to the Amazon with Patch Adams and 100 hospital clowns. To wrap up our travels, we went to the Just for Laughs festival in Montreal where I got on stage again to prove we cracked the humor code. You’ll have to read the book to see how that went.

The book will come out April 1 – April Fools’ Day. It is written as a travelogue and presents the larger-than-life characters we met along the way. It’s not an academic book but the reader will learn about the science of comedy along the way.

4. One of your working papers is titled “Not putting a price on love costs you money.” What is your premise and what did you discover?

This paper relates to the moral research I’ve been doing. One thing we find over and over again in literature is that people don’t like putting a price on the things they love. If you ask people how much they would sell their engagement ring for, they say they wouldn’t sell it for any price. This affirms a commitment to a loving relationship. But the paper turns this around: When people are considering purchases for loved ones, they find it unpleasant to consider how much to spend. To deal with that feeling, they focus on non-price-related aspects of the decision -- quality, for instance. They won’t search around for a lower price or are less likely to negotiate for a lower price because it feels wrong. So they generally end up spending more money than they otherwise need to.

On the one hand, people feel better and avoid the conflict, but as a result, at least when it comes to your pocketbook, there’s a greater cost.

5. Your CV carries this notation under awards: “Professor of the Game, University of Colorado Men’s Basketball; 2010.” How did you earn this honor?

That was really fun. At one point, the men’s basketball team was soliciting names of players’ favorite professors. I had had a basketball player – Dwight Thorne – in my class. One day I received an email that said I had been nominated to be the professor of the game. I was invited to go to a game, tour the locker room, and hang out with the team for their pre-game talk. At halftime, I went out on the court and accepted a basketball autographed by the team. It’s a great honor to have a student recognize you as having had a positive influence in his life.