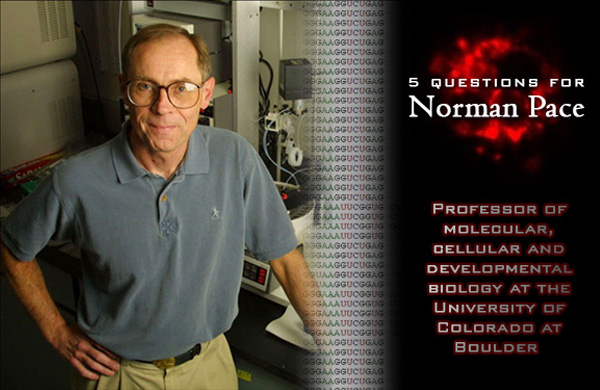 At an early age growing up in rural Indiana, Norman Pace, Ph.D., learned he had an affinity for microscopes and chemistry sets. He was so taken by the "unseen" world, he conjured up a variety of molds to stare at and, he says in his biographical sketch, couldn't resist the idea of making bombs. Lest you think he was a common delinquent, think again. His experiments were all in the name of science.

Pace is a professor of molecular, cellular and developmental biology at the University of Colorado at Boulder. He recently was appointed Distinguished Professor, an honor he received twice before in positions at Indiana University.

As a molecular biologist, Pace and his lab members have studied the structure of Ribonucleic acid (RNA), particularly the RNA enzyme ribonuclease P. He also is a microbial ecologist and has discovered new organisms and their interactions with humans. One recent study made people think twice before showering: Pace's research found that shower heads around the nation not only provide invigorating morning wake-ups, they also release mycobacterium avium, a pathogen linked to pulmonary disease, especially in people with compromised immune systems.

1. Your recent study on shower heads was eye-opening and even a bit frightening. Because you deal with microbes, have you changed your lifestyle to compensate for what you discover?

Not particularly. I got a new shower head — mine was crusty — and I've started scrutinizing hotel shower heads that I encounter. Sometimes I take a bath instead. I also try to stay out of indoor crowds of people. That's hard to do. For instance, at DIA (Denver International Airport) waiting for a train, I stay away from the crowd. When I'm in a crowd, I see a sludge of microbiology. Of course you have to get in the train with them.

2. What research studies are you currently working on?

The shower-head study was a small part of a much larger project, studying aerosol microbiology of the indoor environment: schools, office buildings, the New York City subway system, hospital operation rooms and waiting areas, homeless shelters and public swimming facilities. You don't swim in public pools, do you?

The thing that's impressed me about the study of indoor environments is that we collect 2 cubic meters of air — about what you breathe every day — and it contains 1 million bacteria. No matter where you are, you see human microbiology. Think about it; it makes a lot of sense. There's a convective plume of warm air rising off of you, carrying whatever you are giving off. You have to live with (microbiology), and a little is good. It keeps your immune system humming.

Another thing we found in the New York subway was aerosol iron, presumably from the tracks. If you worked there eight to 10 hours a day, there must be some syndrome you'd have. You couldn't get through a metal detector.

We see microorganisms that humans have had little touch with. Out of about 100 phyla (or groups of organisms), most of our knowledge stems from seven. Only 20 have been cultured. We have little knowledge of what else is out in our world.

3. What research have you conducted that you feel has had the most impact on humankind?

The development of technology (and philosophy) for culture-independent identification and study of naturally occurring microorganisms. This development has changed the face of microbial ecology, which drives the biosphere. Basically we rip out the DNA of an organism and find out what's there. Some prefer to culture it, but we find out more by looking at the DNA than we would culturing.

4. You also are an accomplished cave explorer. What is your favorite cave?

I used to be a lot more active than I currently am, exploring and mapping caves. I've walked in a lot of places where no else has been, on dried sediments that were laid down hundreds of years ago. There are no footprints there, so you know you are the first.

Mammoth Cave in central Kentucky is probably my favorite. (The largest cave system in the world, Mammoth may be as long as 1,000 miles. More than 300 miles have been explored.)

5. Away from the lab, you are a voracious reader. What are you reading now?

I'm right now reading "Earth Abides," by George Stewart, a futuristic novel about the collapse of civilization. I just finished reading "Stoner," by John Williams. It's a biographical novel about a university professor, not about drugs. Before that I read "A Dog in a Hat," by Joe Parkin, a bio about racing bikes in Belgium. I'm into bikes. I follow bike racing (but don't participate); that's a hard way to have fun. I use my bike almost exclusive of cars. I live about 3 miles away (from work). I ride even in the snow; I just use studded tires.