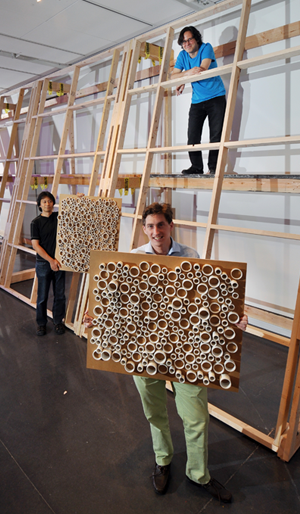 Nikolaus Correll of the CU-Boulder College of Engineering and Applied Science, foreground; Ken Sugawara, a visiting professor from Tohuku Gakuin University in Japan, left; and Michael Theodore of the CU-Boulder College of Music pose at their interactive art exhibit, “Swarm Wall,” which was under construction at the time the photo was taken. (Photo by Glenn Asakawa/University of Colorado)

“Let’s change the world” was a message Nikolaus Correll often heard during his post-doctoral work at MIT, and he came to understand that this was not just another well-used phrase, but his life goal.

Correll, who was born in Germany, attended several universities before becoming an assistant professor in the Department of Computer Science at the University of Colorado Boulder. He attended the Technical University Munich, the ETH Zurich, Caltech, the ETH in Lausanne, and finally MIT, where his adviser, Daniela Rus, liked to toast using the phrase, “Let’s change the world!”

“With a European mindset, it took me almost two years to understand that she not only really means this and is totally entitled to this claim, but that I should pursue another career if my goal were any different,” he said.

During his work on a master’s degree at Caltech, he became interested in “swarm robotics,” which is inspired by behaviors of social insects such as ants. Ants perform actions on their own, but they also are influenced by the actions of those around them and the environment. Now his research focuses on these ideas, including how groups of robots use sensing, computation and communication to perform together.

He also is interested in swarms that do not move. A recent example developed in his lab was a “Swarm Wall” exhibited at the CU Art Museum (with Michael Theodore) where intelligent “nodes” created a swarming effect of color, lights and sound as they detected movement and then communicated with one another. Another example created in Correll’s lab was a shirt that can indicate to the deaf the direction from which noise is coming.

“I hope to be able to further miniaturize such ‘smart materials’ in the future by investigating polymer electronics, effectively dissolving the boundary between computer and material science,” he said.

Recently he was awarded an inaugural Space Technology Research Opportunities Early Career award from NASA, and will continue to study how robots can be used to tend gardens during space missions.

He said studying in four different countries has been an invaluable experience.

“In Germany we call the USA ‘the land of infinite opportunities,’ but we usually associate this with its past, i.e., when the first settlers arrived. That this is still the case was very obvious at MIT. For example, hiring math genius Erik Demaine as an assistant professor when he was 19 years old sends a very clear message to everyone: Give your best and anything is possible.”

He spends time mountain biking and skiing – sometimes in the same day – and, he said, “it seems hard to find a better place to live than Colorado, both personally and professionally.”

1. You have been researching robotic gardening for some time. How did you decide to study and develop this idea?

Robot gardening is a grand challenge that combines perception, planning and manipulation, and is therefore a great driver for cutting-edge robotics education. So it started out as a class at MIT. We then quickly noticed that using many small robots versus big equipment is an excellent way to make use of permaculture techniques (plants are planted next to each other to help each other out), and to save on transportation costs since food production could be done anywhere. This could be a possible solution to make our agriculture more sustainable, which is something we have to do. The NASA grant addresses the key perception and manipulation challenges that robots face when working with plants, while potentially enabling long-duration space flight, which is one of the current frontiers in space exploration.

2. What are some of the difficulties you face when trying to make robots in the garden a reality?

We see a convergence from personal computers to personal robots in almost all fields, by computers being extended with sensors, such as cameras, and with actuators, such as wheels. When it comes to gardening, robotic lawnmowers and automated irrigation systems already work pretty well. Yet gardening poses some of the toughest challenges on robotics because the environment is unstructured (because it is organic), unpredictable (because we are still far from understanding the world around us) and, well, is as dirty as it can get. The NASA grant will enable me to make progress on 3-D perception and manipulation of flexible objects. We will make use of recent advances in computer science, novel sensors for perception from the gaming industry, and an old gardening trick -- using two hands for manipulation: one that holds and one that manipulates. We hope that these basic capabilities will not only provide the basis for sustainable agriculture, but also will make robots much more agile and dexterous than they are today.

3. How has the field of robotics changed over the past 20 years? What are some of the biggest advancements? Stumbling blocks?

Robots are household items -- think Roombas, lawn mowers, pool butlers and those fancy espresso machines -- yet we are far away from Rosie from the Jetsons cartoon. The last 20 years in robotics have been dominated by exponential advances in computing power (Moore’s law, which basically says that processing power for computers will double every two years), eventually enabling breakthroughs in agility (e.g., Boston Dynamics’ “Big Dog,” a quadruped robot ) and real-time autonomous navigation (e.g.,  Google’s self-driving car). Intellectually, the field of artificial intelligence has begun to understand that intelligence requires embodiment and has begun to understand Moravec’s paradox, which ponders the question of why we can calculate the square root of 2 using a couple thousand transistors, but need billions of them to make a robot run like a lizard.  A lizard uses physical computation, e.g., elasticity in its legs, which is tightly intertwined with its neural networks. Building Rosie will require us to better understand how humans accomplish these tasks and make materials that are just as smart.

4. What is a favorite object you keep in your office?

I have a Rubik’s Twist. It’s a snake made of 24 prisms that can be rotated against each other. Twisting them the right way can let you form all sorts of shapes, from a ball to a rubber duck. Altogether you can form something like 10^13 different shapes. I’m not good at it, but if I could automate the twisting and, better yet, have different snakes (self-)assemble into larger objects, there is probably little that couldn’t make itself just in time when needed.

5. What is a goal you would like to accomplish in the upcoming years?

I'd like to establish “swarm intelligence” as the science of everything. I feel that the interesting behavior that we can observe in social insects is just the tip of the iceberg, and that even the human body is nothing more than a very complex swarm: elementary particles interact and communicate with each other to make up atoms, molecules, cells and eventually organs like a retina or the brain.