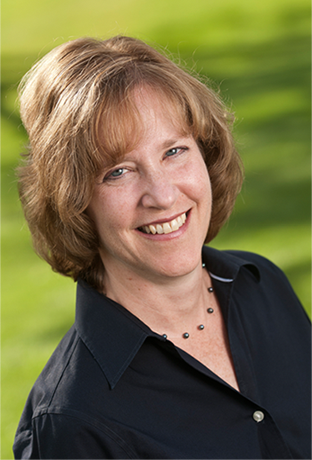 With the exception of grading, Margaret “Meg” Campbell loves nearly everything about her job as a professor of marketing at the Leeds School of Business at the University of Colorado Boulder – the teaching; interacting with students who, she says, keep you young in a way that other jobs don’t; the research; and having the gift of time to reflect on the issues she studies – consumers and why they do what they do in the marketplace.

Campbell double majored in psychology and economics as an undergraduate at Stanford. She worked in the lab of a “fabulous social psychologist,” Lee Ross, and he encouraged her to get a Ph.D. in psychology. “But I was torn because I was fascinated with business and the business world, and with the speed of business as opposed to what I perceived as a slower trajectory of work in academia.” She decided to work and during that time realized what she really wanted was that slower trajectory where there is time to contemplate. “What’s difficult in the business world is there’s a lot of time used for putting out fires and less time for reflection than I think is ideal for making good decisions.” Another Stanford professor, James March, opened Campbell’s eyes to the possibility of business academia as a career path. There she could combine the same research skills she would as a psychologist with her interests in marketing.

Before coming to CU in 2000, Campbell was on the faculty at UCLA.

“L.A. is a great city, especially before you have children; it’s less of a great city after you have children,” she says. A change in lifestyle was needed and she wanted to be at a university known for its research. “This opportunity came up and it seemed perfect in terms of enabling me to have the kind of research environment I wanted and an active student body, and have a place to live with my family that was a little bit more conducive to sanity.”

Our most recent research adds to our understanding of the way consumers process the role of celebrity endorsements. Celebrities, like all people, have both positive and negative parts of who they are. Brands use celebrities for a couple of reasons. One is attention. Consumers are more likely to pay attention if Peyton Manning is the endorser than if Joe Blow the model is in the ad. Another reason that brands use celebrities is to borrow their associations. In essence, the brand uses a celebrity spokesperson to transfer to itself the meaning the celebrity has built in consumers’ minds. The idea is that people will learn something about the brand and the personality of the brand because of who is chosen as the celebrity endorser. Companies look for a celebrity who has the association and traits they want and then hire that person.  What they don’t do is pay attention to all of a person’s traits. Companies act as if only desirable traits will transfer to the brand. Our research questioned whether there was any difference in the way positive and negative traits transfer, and our hypothesis was that, for a variety of reasons, negative traits are more likely to transfer. And that’s what our research showed. Negative information can be very potent.

As an example, Madonna was hired to be an endorser for Pepsi. She’s sexy and powerful. She’s got these positive associations, but on the flip side, she has negative interpretations. Some see her as sexy in a positive way and others see her negatively as lewd or licentious. Importantly, the same person can see her as both. What Pepsi found is that they got the controversial, licentious kind of transfer rather than the positive, sexy transfer they had been hoping for.

An example of a person who has worked well as a spokesperson is Michael Jordan, because he doesn’t tend to have dominant negative traits.  He’s been an amazing spokesperson over the years for a variety of brands.

2. Denver Broncos quarterback Peyton Manning, according to a report by Nielsen Co., is the most popular sports marketing and endorsement figure among fathers. Do consumers really buy Papa John’s Pizza or DirecTV, for instance, because he’s connected with the brand?

There are a lot of factors going on in terms of why people buy the brands they buy. They don’t buy because of a celebrity, but the evidence shows that celebrity endorsements can be effective in increasing sales. Part of it is because the consumer is more likely to pay attention. That notion of attracting attention to a brand is a very powerful aspect of why celebrity endorsements can work. It starts you thinking about Papa John’s Pizza. The endorsement gets the product into the consideration set, or a brand that people think about when they are given a choice. It’s really powerful if Manning helps you think about Papa John’s as a viable pizza brand. Consumers don’t say, “Peyton is there so I’m going to buy that pizza,” but they are more likely to think of Papa John’s on the way home when they are late for dinner and thinking about picking up a pizza. The association of Manning and Papa John’s is  more likely to have a positive effect that drives decisions.

3. You often hear the phrase “sex sells.” Are there other ways to attract a consumer to a product such as sex or humor?

There is a class of techniques that marketers use that many people put under the term “borrowed interest.” The idea is that companies want to borrow interests that people have in order to gain interest in their message. Borrowing interest in Peyton Manning gets us to pay more attention. So do babies and dogs, sex and humor. Anything that is inherently interesting to us as consumers can be attached to a message. The risk of doing that – and it’s a very big risk – is that people pay attention to what they had the interest for but not the brand.  You’ve been at a party where people say, “I saw the funniest ad on TV last night but I don’t remember who it was for.” That’s a bad ad. The brand was trying to borrow the interest by setting up a funny situation that the consumer was interested in, but the consumer didn’t process the message. It’s a real art to successfully borrow interest and make it work for your brand. It works much better if there’s a clear relationship, for instance, sex selling Victoria’s Secret garments. Unless people are offended, the connection is easier to remember. Consumers will say, “I’ll look sexy if I buy Victoria’s Secret products.”

Humans are sense-makers. Sometimes we’re good at trying to make sense of the market place. But if you are a marketer and you make it hard for consumers to make sense of it, it will decrease the memory for your brand.

4. What would you suggest people do to become better-educated consumers and cut through the marketing “hype”?

Overall, try to be conscious of what’s going on. Some of my research focuses on persuasion knowledge, a term for the idea that all of us, as consumers and in other human roles, have learned things over a lifetime about the way marketers or other people try to persuade us. The evidence shows that if you actively think about what people are doing to try to persuade you, then you very often will make better choices. You won’t always resist being persuaded because sometimes you are actually happy to be persuaded. If I go to a sporting goods store and don’t know which set of weights to buy, I may value the information a salesperson provides and his attempt to influence me toward one or the other. But if you are making a very important decision, like buying a car, you should take a friend. The evidence is clear that an observer can be more objective and apply persuasion knowledge more cleanly than we can in the heat of the moment. Stepping back with the help of a friend – or just stepping back mentally – can help people make decisions they are happier with.

5. What does your current research on consumers entail?

I’m doing some work on how to help consumers pursue goals successfully in a variety of domains. I want to understand how consumers think about progressing toward their goals in order to help them do that more effectively. There are a variety of consumption goals, things like completing a college education, buying a car that gets me to work on time, achieving financial security or saving for a vacation. Smaller goals might be maintaining a healthy weight or exercising more regularly.

Caleb Warren, a former doctoral student here, and I are looking at how people determine the movement toward their goals. People often make mistakes in terms of monitoring the effects of their behaviors on long-term goal success, so this is an area where we think our research can help improve consumers’ goal pursuit.