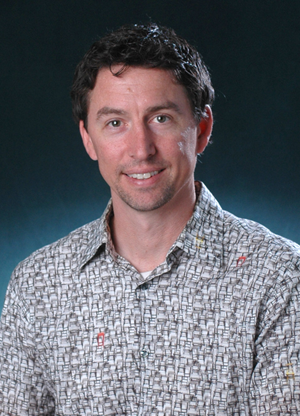 When Hurricane Mitch stuck Honduras in 1998, Max Boykoff was a member of the Peace Corps, working with farmers on crop diversification and integrated pest management practices. The Category 5 event left thousands of people dead and millions homeless. Struck by the power of nature, Boykoff felt motivated to pursue questions of the environment, including those surrounding land management. After earning a Ph.D. in environmental studies at the University of California-Santa Cruz, he became a research fellow at the Environmental Change Institute and lecturer in geography at the University of Oxford. He came to the University of Colorado Boulder four years ago, and he quips, is now a “senior.” He teaches environmental studies and geography and also maintains a collaborative relationship with Oxford University.

As an assistant professor in the Center for Science and Technology Policy in the Cooperative Institute for Research in Environmental Sciences (CIRES), his research interests include the cultural politics of climate change and carbon-based economies and societies. In addition, he’s looked at how “outlier” perspectives (particularly climate contrarians and countermovement groups) gain traction in public discourses. (See article at http://sciencepolicy.colorado.edu/admin/publication_files/2013.05.pdf)

His books include “Who Speaks for the Climate? Making Sense of Media Reporting on Climate Change” (2011) and another that will be released in June titled “Successful Adaptation to Climate Change.” 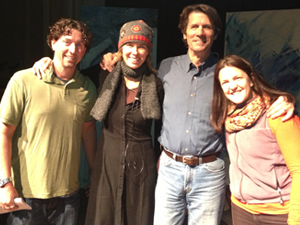 From left, Max Boykoff, Beth Osnes, James Balog and Becca Safran at the Inside the Greenhouse event in April.

Boykoff has worked with researchers around the world, from studying water issues in the lower Jordan River Valley to collaborating with the Red Cross in East Africa. He says he has been fortunate to be able to “expose myself to a lot of different cultures, perspectives and ideas. I’m continuing to learn from them, and some of it is simmering, and I believe my best work and most important contributions are yet to come.”

1. What have your studies on climate change and the media found and what types of improvements need to be made to offer accurate assessments of what’s happening to Earth’s environment?

There’s a lot of nuance and texture so that’s why I ended up writing a book about it, pulling together a number of different studies I had done. Some were quantitative, looking at content and how the media had been covering certain elements of climate change; for instance, the degree to which humans contribute to the climate change we detect now. Some were qualitative treatments, where I interviewed journalists, policy actors, and research academic scientists to understand barriers to -- and levers for -- change.

My findings have pointed to a range of opportunities for improvement, from the practices of individual journalists -- such as more effective contextualization through labeling – to actions of individual scientists or research academics who must work hard to smarten up their language so they can translate complex work to the general public. Both cases seem straightforward, but institutional architectures often haven’t been conducive to supporting those efforts. Scientists still often consider their work with media and the public as an extension or sometimes even an annoyance to the laboratory research. But it’s a different time and it has to be part of our responsibility in doing this work. It’s not about dumbing down for the public; it’s really about smartening it up.

There are also larger institutional practices – ongoing media consolidation and drive for profit – that have worked to the detriment of covering complex and abstract issues. Climate change is certainly an example; it’s a difficult story to cover.

2. Can individuals make a difference when it comes to climate change, and if so, how?

I teach an introduction to environmental studies class, and this is one of the questions that comes up a lot. While it’s important to think about our role in this larger trend on the plant, I tend to favor working in the international and national arena where significant advances can be made. Of course everything we do matters. But we need to recognize that large-scale decisions that are informed by the best science available have the possibility to most effectively improve how we’re dealing with issues like climate change. When I do my work, it’s not to prescribe which policy tool is right or wrong but to make us more aware of what can be gained from certain policy decisions. For example, when you flip on the lights or use your computer, you don’t know offhand what mix of coal-fired power has gone into the electricity generation that you’re benefitting from or what percentage is due to wind. Yet decision-making and systems change will enable us to continue to prosper and do better much more efficiently and effectively.

3.  Some of your students are working on “social acceptability of renewable energy development in the American West.” Explain what they are doing and the results they have found.

My advisee Shawn Olson just defended her master’s thesis, which looks at Converse County, Wyo., and the social acceptability of turbine placements along with questions around resistance to where the projects are sited. One of my current advisees Xi Wang is looking at renewable portfolio standards and how different states are adopting these standards and changing profiles of their energy generation. Xi just received the Albert E. Smith Emerging Scholar Award from The Center to Advance Research and Teaching in the Social Sciences (CARTSS) at CU which is good acknowledgement and support for her path-breaking research.

One of the things I love about my role is being able to work with students and create the conditions where they can do their best work. I’m excited about all of their projects. (Visit http://www.icecaps.org/ for more information about Boykoff’s lab and research work.)

4. What other projects or research are you working on?

I have a co-edited book coming out next month titled “Successful Adaptation to Climate Change.” We’ve been able to pull together top scholars and look at questions around climate adaptation in a variety of cases. They comment on different case studies and how we can measure what’s working. We already are committed to a certain level of climate change, and adaptation is a necessity that’s become more and more acceptable and needed. My co-editor is Susie Moser (Stanford University), who has worked on this for a few decades, and I’ve jumped into these considerations around climate adaptation more recently.

Another project I’m happy to be working on is “Inside the Greenhouse” with two other professors, Beth Osnes in the Theatre Department and Rebecca Safran, a professor of ecology and evolutionary biology. We’re working with students to foster their development of creative ways to communicate about climate change and other issues in the environment. Students present multi-modal forms of communications – performance art, film, dance, public art and so on. The overall project combines courses we’ve developed along with public-facing events. For instance, we sit down with celebrities and talk about the climate and environmental issues and try to draw out their motivations. We had an April event, attended by about 1,500 people, where James Balog talked about the motivations behind his awarding-winning documentary “Chasing Ice.” We’re taking the students’ work and interviews and turning it into a TV program that will launch this summer or fall.

5. What’s the most important thing you keep on your desk?

My grandfather Alvin passed away a few years ago. He worked in the stock room for the Milwaukee Journal Sentinel for more than 50 years and when he reached 25 years of service with them, he got a paperweight. I inherited it and now keep it on my desk. His motto was, “Live, work, study, play, relax.”