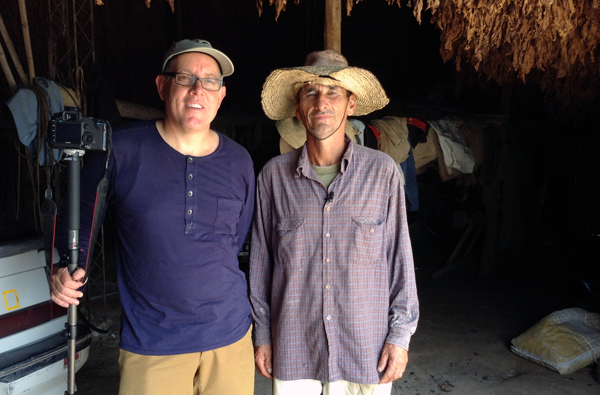 Otañez with a farmer in Argentina. 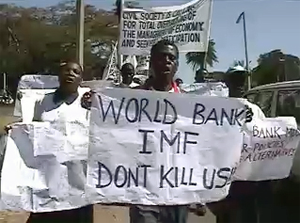 A demonstration in Malawi.

It was April of 2000, and Marty Otañez was in Malawi in southeast Africa at a demonstration against the World Bank and other international financial institutions.

Otañez earned a master’s degree at the University of Ibadan in Nigeria in 1992 and another master’s in labor and employment in the Netherlands before he journeyed to Malawi for the first time in 1995. The country was in the process of democratic change, driven primarily by trade union activities, and Otañez became interested in the role of unions in democratization and social justice.

Five years after first visiting Malawi, Otañez was at the demonstration, filming the event as part of his field work. He had spent time with organizers in the union of tobacco farm workers as he tried to understand some of the obstacles they faced. He was hoping to determine how he could use ethnography and anthropology “to make visible the bad practices of United States tobacco companies that profit from unpaid child labor, bonded labor, and environmental problems such as deforestation and pesticide poisoning.” For no reason, police shot tear gas canisters and tracer bullets into the peaceful crowd of about 60 demonstrators. He began to run for his safety, but at the same time, he kept filming (you can watch the video ‘Thangata’: www.sidewalkradio.net/?p=23).

He wanted to capture knowledge and data to adequately represent what happened on the ground, but he also wanted to show solidarity with the country’s workers and labor leaders.

Otañez has used that experience to encourage students and individuals around the world “to engage on levels that can undermine structures that are responsible for a lot of the problems we address as professors.”

“I engaged in something called militant ethnography, using anthropological resources to push the discipline to more fully meet the mission of the university, which is to contribute to the health and wellness of communities where we work. And it definitely woke me up to the problems people face in developing countries.”

He began to look at anthropology as a tool to work for social justice and the moment also launched his career in video anthropology.

In 2008, he joined the University of Colorado Denver, where he is an assistant professor in anthropology, with specialties that include cultural, visual, policy, and medical anthropology as well as political ecology.

1. Who or what influenced you most while you were in Malawi?

I have been able to visit the country more than a dozen times since 1995 and have probably spent more than 26 months there, doing research projects and working with different groups. One individual who has influenced me a great deal is one of the trade union organizers there, Rafael Sandramu. We would travel as many as 175 kilometers a day on his motorcycle to farms and he would introduce me to some of the men, women and children who grow tobacco. I was drawn to his style of being with the people, not necessarily drilling them for information, but to be present with individuals, and learn from them. Over time, that creates some momentum so that people can have the skills to stand up for what they believe in: fair tobacco leaf prices, fair earnings and a reduction in poverty.

I continue to work with him today and just saw him in January. We have a couple of projects we’re trying to move forward. My time with him encouraged me to think of my position as one of power and influence and definitely a position of organizing, which is how I see myself in the university, in my service, my teaching and in my research projects. 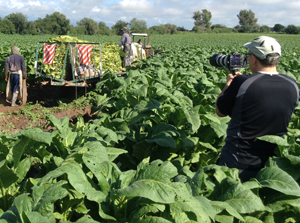 Fair Trade Tobacco is a repository of information and resources for individuals around the world who are interested in making visible the exploitative practices of tobacco companies, cigarette manufacturers and leaf buyers. The specific purpose of the website (fairtradetobacco.org) and the group is primarily to draw attention to some of these problems at the farm level, but also to put pressure on the World Health Organization (WHO) to use May 31, “World No Tobacco Day,” to address something more than demand and consumption issues. For the past 21 years, the theme has never focused on tobacco agriculture. Through the website, we’ve created momentum for WHO to designate May 31, 2015, as World No Tobacco Day with themes that focus on tobacco industry exploitation in agriculture as well as alternative livelihoods for tobacco farmers and farm workers. The designation means that donor funds become available, and it draws attention to the idea that tobacco is not just a health issue, but also involves human rights, fair earnings, food sovereignty and corporate accountability issues.

3. What are the impediments to improving the conditions in tobacco-growing countries and what’s being done to make changes?

The main impediment to any kind of positive changes in the livelihoods of tobacco farmers, farm workers, and public health policies is the tobacco industry, especially Philip Morris, Japan Tobacco, British American Tobacco and U.S. leaf buyers, including Universal Corporation and Alliance One International, that purchase about 90 percent of tobacco in Malawi, as well as the majority of leaf in tobacco-growing, developing countries.

At the local level, we want to provide tobacco farmers and farm workers in Malawi and elsewhere with information and resources so they can advocate for themselves and receive decent earnings, and for those who wish to exit tobacco farming, grow a mix of food and cash crops instead of tobacco. We want to demonstrate to the world the ways that tobacco companies suppress and collude over leaf prices to pass costs on to farmers and farm workers. It’s also important to provide the farmers with accurate and up-to-date information about leaf prices offered by buyers and the different grades and qualities of leaves.

On a national level, it’s about bringing people together to talk about alternatives to growing tobacco and how the tobacco industry through contract and labor arrangements keeps people hooked on tobacco growing. Because Malawi and other countries like it have been growing tobacco for so many years, the crop is an important part of the economy. In reality, tobacco families who cultivate leaf do not benefit in any meaningful way. The discussions about alternatives are about reducing the number of plants produced each year and increasing the mix of crops grown. These crops would be healthy ones that are less toxic than tobacco and do not require a lot of chemicals – crops that people can eat.

The Framework Convention on Tobacco Control treaty is the first international health treaty, and its focus is on tobacco. I’m working with different global advocates and policy leaders to develop provisions that look at alternate livelihoods for farmers and farmworkers and initiatives that hold companies responsible for labor abuses and ecological destructive practices. We want to educate people about the fact that tobacco control is about health as well as economic and environmental issues.

By this time next year, we hope to have a sophisticated program in five or six tobacco-growing developing countries that would, through text messaging, create a repository of information where farmers and farm workers would share information about leaf prices to improve their earnings. Data will be used in corporate accountability and worker rights initiatives in the world tobacco growing sector.

4. You’ve also done some advocacy work for immigrants in the Rocky Mountain region in Colorado. What did that entail?

From 2010 to 2012, I worked in partnership with labor organizers with the Colorado Immigrant Rights Coalition (CIRC) – a group of 55 nongovernmental organizations in the state – through a visual anthropology project that was primarily used to document some of the lives of individuals involved in different jobs that support the ski industry. In 2009 and 2010, this population of undocumented and other immigrants was neglected – a function of geography and lack of resources. We focused on populations in Carbondale and Silverthorne, for example, and documented through video some stories and experiences that these people experienced, including being picked up by ICE (U.S. Immigration and Custom’s Enforcement). We use video as an advocacy tool, but it also is a historical tool and people can use it to remember the struggles and victories immigrants face (https://vimeo.com/album/1684239).

Historically, we as anthropologists go and tell other people’s stories. I gravitated toward a model of digital storytelling to allow myself as a professor and a professional filmmaker to provide others with the skills to share their stories. It’s a technique and strategy to provide individuals from the community with the structure and co-facilitators, as well as the equipment, to make stories on the issues that they believe are important to their own community.

Through research projects, I’ve investigated tobacco, cancer, and hepatitis, and now I’m working on sexual and reproductive health access and justice (http://tinyurl.com/mjma6e7). Individuals share their stories on the videos, which are accompanied by companion policy briefs or viewing guides. The videos are used to get the issues onto the landscape where decisions are made about people’s lives.

5. Tell me about a favorite item that you own.

One of the things I have is a fake shrunken head that a former undergraduate student of mine from Ecuador brought to me. I like it because it is prominently displayed next to my computer monitor and it gets so many reactions: everyone notices it because it is so odd -- the hair, the thread through the lips, the leather-looking skin. In our society, many individuals find it disturbing that cultures would shrink heads. In reality, from my knowledge of Ecuador, individuals never actually shrunk heads. It was a tourist thing that was devised to generate material things to sell. It reinforces an awareness about culture, and on a different level, it is a symbol of who I am. I’m half Eucadorian. I sometimes joke that I have Incan blood that drives me in my scholar activism. My Ecuadorian heritage is something I’m continuously learning about. It’s something I’m proud of and wear on my sleeve even though it gets crowded out by my white-looking skin.

Tagged with:
Department of Anthropology