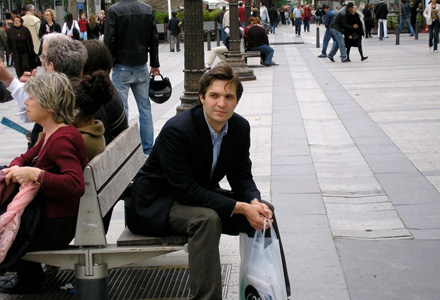 Leaf Van Boven takes a break from a nearly six-hour walking tour of Paris on the Champs-Élysées near the Obelisk of Luxor. Following a presentation at the INSEAD business school a few years ago, Van Boven and his wife enjoyed an extended vacation/second honeymoon in France and Belgium.

A single day in an introductory class helped launch Leaf Van Boven’s career in social psychology, but it was statistics and the science of discovery that sealed the deal.

“I knew on the first day of intro to psych that I wanted to be a university professor – tweed jacket with leather patches and all,” says Van Boven, an associate professor in the Department of Psychology and Neuroscience at the University of Colorado Boulder.

He found his calling in a statistics course where he was fascinated by two observations.

First was the idea that there is a science to understanding how the mind works, and that the rigor and power of the scientific, experimental method could be used to advance human understanding.

The second was how distraught people in the class felt being the subject of data analysis, critical thinking and prediction. For instance, there’s “regression to the mean,” or the idea that those who performed at the very highest level on one exam were unlikely to perform at the same level on the next exam. The performance, says Van Boven, decreases because of perfectly normal random fluctuations, but some of his classmates felt that using statistical principles to predict behavior somehow undermined their humanity.

“For my part, I was fascinated both by the fact that statistical principles could be used to predict human behavior and that people were reluctant to apply those principles to themselves. That was really a distinct starting point to my interest in human intuition.”

Van Boven earned his Ph.D. in psychology from Cornell University in 2000, and after a brief stay at the University of British Columbia, was “fortunate” to be hired by CU in 2002.

“People don’t always realize how competitive tenure-track jobs at top research universities can be,” he says. “We often have 125 applications for a single position, so I count myself very fortunate to have been offered a position at CU.”

He is director of the Emotion, Decision, Judgment and Intuition (EDJI, pronounced “edgy”) lab, which investigates the everyday interrelations between emotion, decisions and judgments — and people's intuitions about those interrelations.

“To have the opportunity to spend time discovering new things about how the social mind works is amazing. It is greatly rewarding to work with very talented, hard-working students to identify interesting and challenging questions, figure out how to test those questions, and then analyzing, deciphering and communicating those discoveries,” Van Boven says. “How many people get paid to do what they love doing?”

1. Some of your research includes how people’s immediate emotional experience shapes their perceptions of themselves and the social world.  What have you found?

In another line of work, we’ve examined people’s tendency to see their immediate emotions as more intense than their previous emotions, a pattern we call the “immediacy bias.” This bias is important because it gives greater power to emotions in the here and now, which can lead people to think their current emotions are unusually strong and therefore worthy of action. We have shown, for instance, that terrorism risks that just happen to arouse immediate emotions are seen as more dangerous than terrorism risks that happened to have aroused previous emotions. We have also shown that people donate more charitable funds to humanitarian suffering that just happens to arouse immediate emotions – if the suffering happens to be presented last in series of emotionally evocative descriptions – because they perceive their immediate distress, and hence the severity of human suffering that caused that distress, as more intense than their previous emotions.

In another area, we are working on the question of how people’s experience with attention influences their perception of emotional intensity, and particularly whether people believe that objects that capture and hold their attention are more emotionally significant than objects that do not capture and hold attention. There is a large body of previous research implying that objects that are emotionally arousing, such as emotionally evocative pictures or people, attract and hold attention, or in other words, emotion influences attention. We are examining the reverse association, or whether attention influences emotion. This is important because there are many factors unrelated to emotionality that can influence attention, such as whether a topic happens to be covered in the media or happens to be visually salient.

2. Another topic of research is the (false) perception of political polarization. If Americans aren’t politically polarized, what is it that we are experiencing?

We have found in several studies that people drastically overestimate American political polarization.  Democrats and Republicans simply do not see things as differently as we expect them to. We’ve found this overestimation of polarization across many issues and for the past three decades. That doesn’t mean that Americans aren’t somewhat polarized – we are – but the degree to which that is true is largely exaggerated. This observation, then, raises the interesting question of why people perceive polarization.

We’ve identified and are studying three social psychological factors. First, people who themselves have more extreme stances on partisan issues see Americans as more polarized; people seem to assume that their own strong feelings are shared by others, both on their side and the opposite side of partisan issues. Second, people see more polarization to the extent that they personally identify with partisan groups. Those who strongly identify as Democrats, for instance, see more polarization than those who less strongly identify as Democrats. This is partly because people who care about their group (as measured by identification) tend to draw sharper distinctions between their group and other groups.

Finally, we have found that the experience of anger increases perception of polarization to the extent that people identify with a partisan group. We believe that anger signals that one’s group is under threat – Democrats feel more threatened when they happen to feel anger than when not – and the perception that one’s group is threatened causes one to draw even sharper distinctions between one’s own and other groups.

3. Are humans more alike psychologically than not or do our varied experiences make us truly different?

In the broader scheme, humans are almost exactly the same as one another. If the proverbial Martian was to visit Earth to understand humans, he’d be less interested in administering personality tests and more interested in characterizing our commonalities (How do we grow, reproduce, eat?  Do we live in groups or individually?  Do we communicate orally?  Do we have emotions?  As a species, how “intelligent” are we?  How are our brains and bodies structured?). As a social psychological scientist, I take essentially the Martian approach, asking questions about human commonalities, designing experiments to uncover those commonalities, and making inferences about how people typically feel, think and behave. It is true that we are complicated subjects, but that’s what makes us so fascinating to study.

4. You direct the EDJI Lab, which uses psychological science to understand and improve the quality of everyday life. Can you give examples of how the lab’s and your work has improved life?

We previously found that people are made happier by pursuing life experiences than by pursuing material possessions, which has strong implications for prioritizing life goals. We found that immediate emotions can have undue impact on behavior (as when embarrassment in the “heat of the moment” prevents people from taking social risks), which implies that people benefit by giving themselves some “cooling off” time before making decisions. We found, as I described, that Americans are less politically polarized than we tend to believe, which implies that we might adopt a less combative stance in partisan context – particularly given that anger can exacerbate partisan conflict.

5. What keeps you busy outside of the university setting?

I have two children, Caleb, 15, and Anna, 11, who keep me plenty busy. Between homework, shuttling to activities, homework, and the usual parenting requirements, I spend lots of nonwork time with the kids.  I’m amazingly fortunate to have the opportunity to do so. I’m also an avid cyclist – mostly road, mountain biking less frequently – and generally enjoy the beautiful Colorado outdoors.

Tagged with:
Department of Psychology and Neuroscience

Facebook app encourages individuals to get in touch with their DNA

Send your thoughts and suggestions for the Newsletter.
END_OF_DOCUMENT_TOKEN_TO_BE_REPLACED