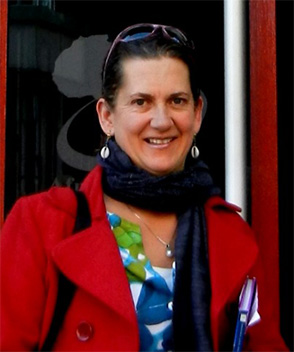 The idea to write a book came from a chance meeting and a mutual interest in peace, conflict issues and Africa. Laura DeLuca, Ph.D., an anthropology lecturer at the University of Colorado Boulder, and Sylvester Bongani Maphosa, Ph.D., director of the peace and security unit at the Africa Institute of South Africa (AISA), first broached the subject of collaboration nearly a year ago. Both had attended an October conference sponsored by the Center for the Study of Conflict, Collaboration and Creative Governance.

DeLuca teaches several Africa-related courses at CU-Boulder and has published numerous articles concerning Africa-related issues; Maphosa’s institute – a research organization and think tank that focuses on a variety of topics including socio-economics, politics and development – was considering a book project.

DeLuca’s interest in Africa began as a Peace Corps volunteer who lived and worked in a remote area of western Kenya in a Luo village near Lake Victoria. After earning her doctorate at the University of Colorado Boulder in 2002, she began work as an anthropology lecturer, teaching courses on Africa, international development and social entrepreneurship. She has conducted research in Kenya and Tanzania on conservation issues, written about African refugee issues, participated in the Sudan Field School, and has published works on the crisis in Darfur and education in Kenya.

She recently spent nearly three weeks as a research fellow with AISA in Pretoria, South Africa. Now, DeLuca and Maphosa will co-edit a book emphasizing the successful community-based approaches to peace-building in Africa. The project will draw on global authorities and is scheduled for completion in October 2012.

The title of the book is “Peace From Below.” Post-colonial Africa has experienced a lot of unrest and civil war. Instead of looking at the top-down failures of peace and conflict issues, the idea is to look at the grass-roots, bottom-up approaches that have worked and document them. We don’t want to ignore the fact there have been real challenges, but we want to try to focus on the positive and what is working to showcase those methods as models. Instead of being just academic theory, we want the book to have a strong practice piece. 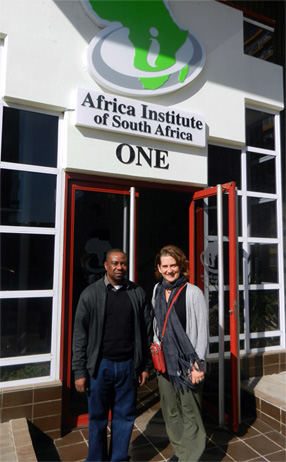 2.  What is the goal of the publication?

After we publish the book, we’d like to do some outreach. South Africa is a regional leader economically and in terms of development and peace and security. AISA has relationships with five historically disadvantaged universities and we hope to take this information and develop capacity building and training, and to work with future leaders on peace and conflict studies.

Our audience would be academic first, then civil society organizations, nonprofits working on peace and conflict issues, and governments.

3. Although the project is still evolving, you already have a number of prestigious contributors. What are some of the institutions that will be participating?

This book is particularly exciting because Boulder is a hotbed for peace and conflict issues. Stanley Deetz, director of both the Center for the Study of Conflict, Collaboration and Creative Governance (C3G) and the Peace and Conflict Studies Program, has been supportive of the book project. In fact, the book is a direct result of the C3G conference he organized with the support of C3G and Peace and Conflict staff and affiliates including Colleen Scanlan-Lyons, Heidi and Guy Burgess, and Dai Kato. Other faculty will be involved. For example, Mara Goldman, assistant professor of geography and faculty research associate in the environment and society program at the Institute for Behavioral Science (IBS), and a Tanzanian colleague will write a chapter about conflict resolution in Maasai communities in Tanzania.

Our hope is to bring everyone who is working on the book together in Pretoria in January 2012. There we will build relationships and have an exchange of knowledge so people who might not otherwise have this opportunity can meet. At a round-table seminar meeting, contributors will share the drafts of their chapters, but not as an academic exercise. There will be high-level practitioners from around Africa interacting with experts from the United States. The ultimate goal is to not only contribute to the academic literature on peace and conflict studies, but also to influence practitioners working to create peaceful communities often in the midst of violence.

4. What are some bottom-up concepts that have worked?

One example is conflict resolution and peace building in Tanzania. Instead of using external legal structures, the Maasai have traditionally solved their own conflicts. Another idea comes from a man I met through Boulder’s Unreasonable Institute. Morris Matadi is a former child soldier and is working with child soldiers in Liberia and the Republic of Sierra Leone. He’s developing a method of dealing with trauma, not as an outsider but as someone who has had the same experiences and is trained in peace and conflict issues. His is a voice that might not be normally heard in a traditionally academic book.

5. What are some of the biggest impediments to peace in Africa?

From my perspective, one major impediment began in 1885 with the Berlin Conference and the “Scramble for Africa.” In many African countries, the borders were artificially created during the competition between European powers to grab resources and gain political influence. They were concerned less about creating nations that had any sense of coherence internally. That’s not the only challenge, but it remains an important factor. An example is South Sudan, which became the newest country in Africa on July 9, 2011. Some would argue that north and south Sudan should never have been put together because the boundaries didn’t take into account local groups. When Kenya and Tanzania were formed, the Maasai ethnic group was split in half even though most Maasai see themselves as one nation, a coherent whole. Suddenly there’s this arbitrary outside power saying this is Tanzania and this is Kenya and you can’t cross over and visit this person who used to be your neighbor, you can’t take your cattle across the line, and you can’t go to a market without some sort of pass saying you’re moving into Kenya.

Tagged with:
Department of Anthropology

Send your thoughts and suggestions for the Newsletter.
END_OF_DOCUMENT_TOKEN_TO_BE_REPLACED