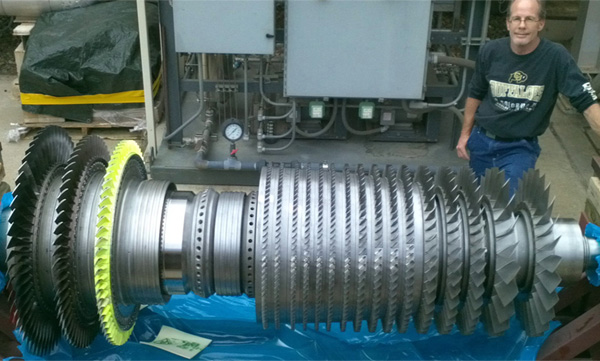 Kenneth Morse with the overhauled turbine at CU-Boulder’s Power House. 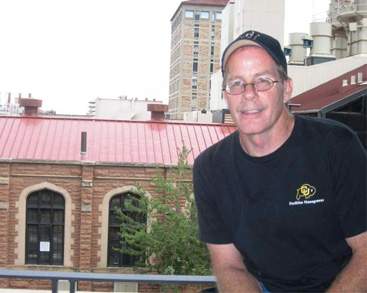 In the middle of the University of Colorado Boulder stands a compact building that houses turbines, generators, boilers and a host of other equipment used to provide power to the entire campus. The original Power House – built in 1909 to provide heat, electricity and hot water – used coal as its fuel, then later natural gas. In 1992, the plant was retrofitted to be a cogeneration facility, using one source of fuel to generate two types of power.

Kenneth Morse worked with the construction company that converted the plant. After he had installed and started up the new equipment, he was recruited to stay with the university and later became maintenance supervisor and operations manager for the Power House.

He’s no stranger to power plants: He previously installed equipment for a trash incinerator in Florida, geothermal plants in California and a compressed air energy storage plant in Alabama. He clearly loves machinery, and during his leisure time he builds and restores vehicles.

Perhaps the curiosity about how things works is genetic: Morse is the eighth-great grandson of Samuel F. B. Morse, the artist and inventor of the single-wire telegraph and the co-inventor of the Morse code.

1. How much power, and what kind, does the Power House produce now?

We use natural gas to make electricity by running gas turbines. The exhaust from the turbines – called waste gas – is captured and used to heat water to produce steam. This method known as cogeneration is popular because it’s more efficient and can be a more economical way of producing energy needed to power and heat the campus. The energy that normally would go out the stack and be wasted is instead used to produce another form of energy. The combined output of the plant produces enough electricity to power more than 30,000 homes.

The original plant was built in 1909, so within our walls we have an array of history and different equipment still running in the plant. Some major equipment was installed in the 1950s and some systems have been around longer than that. (We don’t have records that go that far back.)  The Power House can produce all of the electrical requirements for the campus and still export any excess to Xcel Energy. Because we’re tied to the electrical grid we can also import everything we need. The campus peak load is 21-24 megs, but the plant is capable of producing 31 megs. We can become our own island of electricity if needed during bad snowstorms or windstorms that cause power outages.

We’ve just completed a 100,000-hour overhaul of a gas turbine and generator, which cost $4.5 million and took 1 1/2 years to plan, procure the parts, and more than three months to rebuild and inspect to make sure it works like new again. The university is also building a second plant that will share steam and chill water production to the campus, with the electricity still produced at the Power House. The Power House will get a new, larger steam turbine and new chillers, so we have some intensive modifications going on. This plant is very compact – it’s kind of like working in a submarine – so the placement of the equipment will be critical.

2. What is the toughest process you’ve gone through at the Power House? 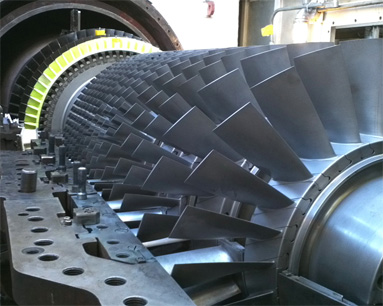 3. You patented a repair process you use at the Power House. What was the issue?

I did it because I’m not a fan of fixing things twice and can be a bit lazy having to do so at times. The problem, which has been documented since 1957, was with the de-aerator, which prevents corrosion in the pipes. It was built with different materials that were different thicknesses. When the thing heats up, the thin material grows at a faster rate and buckles and cracks the welds and thinner materials inside. Normally, you would have to cut open the vessel, make the repairs, put the vessel back together and recertify it. All of that would take a couple of weeks. But my colleague and I created a way to take multiple pieces in smaller sizes through a manway – an oval hole that’s about 11 inches by 16 inches – and assemble them inside to make the repairs. It’s like building a ship in a bottle. The repairs used to be a yearly problem, but since we created the fix, I haven’t been inside there for five or six years. The process we invented was a lot cheaper and took less time – only a weekend.

4. Was there an event or person who influenced your passion for machinery?

My dad. As a kid I was always curious about how things worked so Dad would let me hang out with him and show me how things worked as he fixed things around the house and at work. I like building street rods and trucks. One of my favorites is my ’67 Mustang that is more of a mod restoration using period-correct parts to make it look like it did back in the day, along with some modern technology. I’m also working on two other projects. One is with my son Josh, building up my dad’s old ’72 F-250 truck. It’s looking to be a more impressive street truck than the version I built when I owned it. The second project I’m working on with my daughter Myka is a ’70 Baja bug that’s turning out to be a screamer in its own right. My everyday driver is a ’03 F-250 Super Duty. The beast makes a ton of power. We all seem to like making things go fast.

5. What’s the worst job you’ve ever had?

Working in a paper mill that was currently in operation but was doubling its capacity. We had to go in at night and add the additional rollers between the mills’ existing rollers. Everything was still hot, stinky and dirty. We had 12 hours to install the additional rollers and put the plant back in operation. During the day we also doubled the capacity of the mills’ chemical-producing equipment used in the paper-making process. Both would make a great episode on “Dirty Jobs.”