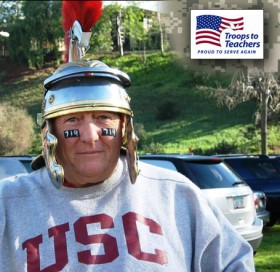 Joe Morgan wears the number 719 over his eye black as a joke during the 2005 National Championship, when Texas beat the University of Southern California. USC's Reggie Bush wore 619, San Diego's area code, to honor the city; 719 is Morgan's Colorado Springs area code.

Joe Morgan spent 30 years in the Army serving in ranks from private to colonel. His tours of duty included a 16-year stint in West Germany, time in Vietnam where he was an infantry team leader and conducted reconnaissance missions in an L19 Bird Dog, and during the first Gulf War, in Saudi Arabia. In 1997, when he retired, it took him only a few months to decide what to do next. He could have become a defense contractor, a position that would have paid an excellent salary, but he wanted to stay in Colorado in a job that was not work, but a mission – similar to the military – where he could help others be successful and where the reward would be something other than monetary.

In January 1998, the Colorado Department of Education offered the University of Colorado at Colorado Springs the opportunity to host the Troops to Teachers program. Morgan was selected to lead the program, and as the program expanded several times over the years, he moved to the position of regional director of Mountain Pacific Troops to Teachers, which covers eight states. With 33 locations that support all 50 states, the national program counsels and provides financial aid to men and women who have served in the armed forces and want a second career as an educator.

Troops to Teachers began as a Department of Defense jobs program in 1994 to provide employment for veterans who were involuntarily released from service as the military downsized at the end of the Cold War. The program was so successful it was transferred to the Department of Education and became part of the No Child Left Behind Act of 2001.

Prior to joining the program, Morgan earned a bachelor's degree in health physical education and recreation from the University of Tampa, along with a certification in teacher education. He earned his Master of Science degree in education administration from the University of Southern California, and he still bleeds a little cardinal and gold as he follows the institution's sports teams, especially football and baseball. He's "really happy" that the Colorado Buffaloes will soon compete against USC and other Pac-10 teams and thinks the change will benefit the conference both academically and athletically.

The national Troops to Teacher program has placed more than 13,000 participants in classrooms since its inception. The state of Colorado program, hosted by UCCS, expanded to a consortium of states including Nebraska, New Mexico, Kansas, Utah and Nevada in 2000. The consortium of states became the Mountain West Troops to Teachers region. Recently, the program at UCCS expanded to include California and Hawaii and was renamed Mountain Pacific Troops to Teachers. The regional program has been extremely successful in producing quality teachers, a high percentage of whom are men and minorities. In addition, they have experienced beneficial and successful teaching in high-needs subjects such as mathematics, science and special education. They also are teaching in high demand schools in inner cities and outlying rural areas.

The program provides a $5,000 stipend to help defray education expenses necessary for licensing and/or a $10,000 bonus if an applicant chooses to teach in a low-income school for three years.

Currently, the U.S. Congress has designed legislative improvements to bring more separating military members into the program. These improvements include program eligibility for military members with four years of service – currently you need six years of service – and expanding the number of districts where applicants can teach throughout the United States. The U.S. House of Representatives has already passed this legislation and it is being taken up by the U.S. Senate this summer.

Part of what makes our local program so successful is our staff. Meghan Diderrich, the associate regional director, began working with us as a UCCS work study student some 10 years ago, and has earned her bachelor's and master's degrees from UCCS and is currently enrolled in the education Ph.D. program. The Colorado state director is Robert Leonard, a retired Army master sergeant who earned his teacher education license from Colorado Christian University and is pursuing a credential at UCCS in special education. Illana Gordon, the director of administration for the region, recently earned her teacher certification credential at UCCS and is now pursuing her master's degree in education, also from UCCS.

2. What have participants said about the program? Can you tell me about some of the people who are in the program?

Participants have overwhelmingly been supportive and appreciative of the program. Across the nation as well as here in Colorado, Troops to Teachers applicants have become "Teacher of the Year" award winners and have been selected at a very high rate to advance as master teachers, administrators, principals and even superintendents. One of the biggest supporters of Troops to Teachers in this area is Robert Null, retired Air Force colonel, a former Troops to Teachers applicant and a District 11 school board member. (He's also the brother of Dr. James Null, former UCCS dean and now Distinguished Professor of political science at UCCS). Additionally, other graduates of UCCS that have gone from teacher to principal include Brett Smith (Colorado Springs) and Sherman Fuller (retired sergeant major, current vice principal in District 11).

3. Do you miss being a part of the armed forces? Why or why not?

I do not miss active service with the military. I feel the rewards of Troops to Teachers outweigh the importance of my accomplishments while I was an active member of the military. The challenges of coordinating and improving the regional Troops to Teachers operations are very close to the leadership and management requirements in the Army. The toughest thing about being in the armed forces is the awesome responsibility of leadership in combat operations. The best thing is the spirit and resilience of American soldiers.

4. Why is this program so important to you, personally, and what would you change about it if you could?

Today, only 1 percent of the nation serves in the military. In most communities across the nation, citizens have little idea of the wonderful characteristics and values that are forged by service to the country. Too often, news media and TV entertainment misrepresent the American military. Troops to Teachers provides classroom role models who demonstrate the leadership skills and can-do problem solving attitude learned by military service members.

If you think of the best teachers you've had in your life, they have the same characteristics that military leaders have. I have such an affinity for these young men and women who serve the country and now will serve again – that's our motto, "Proud to Serve Again." Military members are so wonderful, and to have these wonderful teachers in the classroom makes for wonderful citizens and successful people. It's not easy to be a teacher, and it's not easy to become a teacher, especially if you don't have a good road map.

The Troops to Teacher program should be expanded throughout the nation. I would like to see an opportunity for young people to join the military with the intentions and goal of becoming a public school teacher – "Join the Army, Become a Teacher." This would provide the education and practical experience necessary to construct teachers that represent values learned from serving the nation.

5. You coached the UCCS baseball team from 1997 to 1999, and are a huge sports fan. Why are sports, especially baseball, so important to you?

I played baseball from when I was a little kid and learned a lot about life from athletics. I think the people I really identified with most were baseball coaches like Dodger coaches Walter Alston and Tommy Lasorda. They were very positive people. And Rod Dedeaux, who was the baseball coach at USC and was named Coach of the Century. They have the same characteristics and qualities that most United States military, especially Army, service members have. They have a lot of discipline – used to overcome adversity, to not to let small things bother you, and to know that you can always succeed if you work as a team.

I love college athletics because of the ethical conduct and competitiveness and love of the game that you don't really have in the pros, and the loyalty the kids have to their teams.