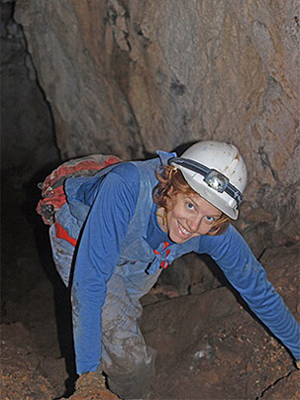 Jessica Metcalf in a cave during an archaeological dig in Tasmania.

Colorado’s state fish – the greenback cutthroat trout -- has persevered over the decades despite people, pollution, overbearing fish neighbors, being declared extinct, even the indignity of being misidentified. But years of detective work from postdoctoral researcher Jessica Metcalf and colleagues at the University of Colorado Boulder and state and federal agencies have pointed the way toward a brighter future for the prized fish.

The trout once swam freely in the rivers and streams of Colorado’s Front Range, but in the late 1930s, the fish was declared extinct. Decades later, wildlife officials thought they had found the fish and began concerted efforts to re-establish the species of cutthroat in state waters. But Metcalf’s ongoing research, including some based on age-old DNA, determined that officials had been stocking the wrong cutthroat species. The CU research also uncovered a cache of pure greenbacks near Colorado Springs, triggering new efforts to revive the greenback cutthroat population.

“Now that we have a better understanding of the native diversity of cutthroat trout in Colorado, federal and state fisheries biologists can move forward with the recovery of the greenback cutthroat trout, which is currently listed as ‘threatened’ on the Endangered Species Act,” Metcalf said.

Metcalf originally planned to go to medical school, but she became more interested in nonhuman animals while taking biology classes. During her final years of college, she explored lab research and field work in order to decide what her future path might be. Metcalf spent a summer participating in a National Science Foundation Research Experience for Undergraduates at Montana State University, working on a microbial bioremediation project. Another summer was spent as an intern for U.S. Fish and Wildlife in Alaska, working with wild salmon populations. During a semester at the University of Idaho, classes in genetics and wildlife biology, along with a lecture on conservation genetics, enthralled her.

“I was hooked and have been studying conservation genetics of a wide variety of animals, including trout, ever since.”

1. How did you begin to study cutthroat trout and what was your intent for the research? 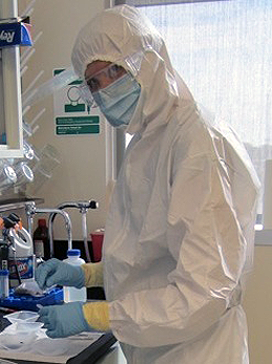 Metcalf in the lab, working on ancient DNA -- fecal material recovered from intestines of human mummies.

In late 2001, I joined Professor Andy Martin’s lab at CU.  We discussed possible projects for my Ph.D. and chose to focus on cutthroat trout in Colorado because it was a locally important fish, heavily managed, and the evolutionary history and taxonomy was not well-understood. Our goal was to provide federal and state fisheries biologists with basic information about cutthroat trout genetic diversity. In 2007, we published a population genetics paper, which showed that cutthroat populations considered greenback, our state fish, were likely misidentified. We suggested that early 20th century fish propagation and stocking activities, which resulted in the translocation of cutthroat trout across major water drainage systems, had likely muddled the taxonomy and identification of cutthroat trout in Colorado.

After completing my Ph.D. in 2007, I accepted a postdoctoral position in Adelaide, Australia, at the Australian Centre for Ancient DNA. For my postdoc, I learned the techniques for recovering degraded DNA from a variety of types of ancient material, such as bones and teeth of Ice Age (late Pleistocene) mammals.

During my postdoc, Andy Martin and I decided to collaborate on a project to try and recover DNA from the earliest cutthroat trout museum collections, which would allow us to better understand the diversity and taxonomy of cutthroat trout in Colorado before the major fish propagation and fish-stocking activities. I attempted to extract DNA from tissue and bone samples of 45 individual fish. I successfully recovered sufficient DNA for sequencing from 30 fish.

2. How did all of this research come together?

Andy and I have worked on cutthroat trout for about a decade now. With our 2007 publication, we were left with quite a few questions, which I feel like we’ve now answered in our 2012 publication. The museum samples, which were collected from all major drainage systems in Colorado between the mid- and late-1800s, allowed us to characterize the baseline, historic diversity of cutthroat trout in Colorado.

We had a few surprises. First, we were expecting to find four distinct subspecies in the museum collections. Instead, we discovered six subspecies, two of which may have gone extinct since the late 1800s. It appeared that each major drainage system may have been home to a distinct subspecies of cutthroat trout. Today, cutthroat trout diversity across the state can be explained by the massive fish propagation and stocking efforts that occurred in the first half of the 20th century. As part of the study, we also compiled more than 41,000 fish stocking records from 1889 to 1925 to better understand the sources and end points of cutthroat trout fish propagation and stocking.

The biggest surprise of the study was the discovery that greenback cutthroat trout, once native to the South Platte, are now only found in a single population outside of their native range. Ironically, the single surviving population was likely the result of an early stocking event by a hotelier near Colorado Springs in the late 1800s. The small population has persisted in a small, isolated stream for more than 100 years.

The trout research has been very rewarding because of the number of people involved from academics as well as state and federal agencies. As Andy Martin nicely stated, “Our greenback story is really one about what can be discovered when dedicated and talented people collaborate with a shared purpose.”

3. What other types of research have you done?

As part of my postdoctoral research at the Australian Centre for Ancient DNA, I have worked with archaeologists and paleontologists from South America to study the genetics of extinct Ice Age megafauna. As a result, I was invited to participate in one of their current digs in Patagonia. We were looking for teeth and bones from charismatic mammals such as the giant groundsloth, the saber-tooth cat, horse (hippidion) and camelids.

I also am currently exploring microbial aspects of corpse decomposition for the Department of Justice with associate professor Rob Knight at CU-Boulder. This is quite a change from conservation genetics of trout! However, it is common for researchers in ancient DNA to cross over into the field of forensics, which also requires specialized techniques and facilities for working with degraded and trace amounts of DNA.

4. What do you hope you’ll be doing five years from now?

I hope to have my own modest ancient DNA lab. I hope to be doing exciting research on a variety of ancient DNA projects, including more studies of extinct late Pleistocene South American animals.

5. Do you have a favorite object or artifact from your research that you have kept?

I work on ancient fecal material quite a bit. Unfortunately, I am not allowed to keep any of my research material for my personal desk collections, but if I could, it would be a really cool piece of old poo.