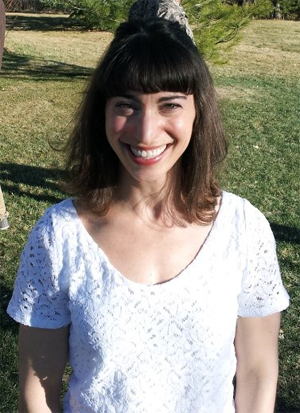 The psychological wellness of cancer patients often can influence health outcomes. At the University of Colorado Hospital, Jennifer Caspari spends much of her time building relationships with patients, especially those involved with stem cell transplants, to help their recovery. Her work involves everything from providing general psychological support to assisting with non-pharmacological pain management.

“One thing I love about this area of work is that I often have the opportunity to follow patients and families over a long period of time and create deep and connected therapeutic relationships,” she says. “What personally draws me to the work is the human connection and being a presence in the room through some very challenging events. I view my role as one that goes beyond specific techniques and psychological interventions: I come into a room and do my best to form connections and relationships.”

One of her recent projects at the hospital turned the focus on non-professional caregivers, who often spend much of their days caring for a sick spouse or relative.

As an assistant professor and psychologist with the division of hematology at the University of Colorado School of Medicine, she also is involved with teaching first- and second-year medical students communication skills such as how to interview patients.

Caspari studied journalism as an undergraduate, but as she began taking upper-level reporter classes, she had second thoughts about journalism as a career. A reporter’s life – always on the go and with little structure – appealed to her less and less. What she did like, however, were her psychology classes. She decided to major in psychology and minor in communications.

“I really enjoy people and learning about their stories and how they got to where they are in life,” Caspari explained. She earned a master’s degree in counseling at George Washington University and then a Ph.D. at the University of Denver.

“I was always very interested in psychology and wellness, and I have a little bit of a personal connection. I have mild cerebral palsy -- I was born three months premature -- so I’ve had physical limitations and difficulties throughout my life. I am personally interested in how we take care of ourselves physically and mentally when we have challenges.”

After several training experiences in large hospital systems, she came to CU and has been with the university for about a year and a half. Although she spent her early years in New York, she considers Colorado her “home base.” Her family moved to Boulder when she was a teenager; her parents are still in Boulder and a sibling and her family live in Broomfield.

1. This month you initiated a workshop for caregivers of cancer patients. Why is a workshop like this one important and what do caregivers learn?

The workshop came out of a training I attended in California in July that was conducted by City of Hope. As part of the training, we were given the assignment of creating some type of caregiving program. What we know from the literature is that caregivers often are more distressed than the patients because they are managing many roles, usually without formal training or education.

Caregiving can be very stressful and overwhelming. We wanted to create a program that is a combination of teaching caregivers stress management skills and relaxation techniques and creates a little bit of a respite and a chance to meet other caregivers. We thought a workshop would be more feasible logistically than an ongoing support group because it’s less of a time commitment for caregivers.

Originally it was designed to be a two-part workshop but we decided to change that to two initial workshops and a follow-up session online that will hopefully be more accessible to caregivers. The booster session will be an hourlong webinar that will review stress managing skills and relaxation strategies.

One of the challenges of any caregiver program is to actually get them through the door. There’s a ton of interest, but because they are so taxed and spread thin, and often have little time, it can be challenging to get a large number of participants. Caregivers often experience guilt around taking time off.

In the future, we plan to either offer the caregiver workshop on an ongoing basis or reformat it into both a patient and caregiver program.

What we teach the cancer caregivers can help caregivers of patients with any chronic or major medical illness. What we know from the research is that for most of these caregivers, there is no distinct end to the day. Caregiving continues 24/7 in most cases and a couple of studies show that, on average, cancer caregivers are in the role for at least a year.

2. What are some other research projects that you are involved with?

Another pilot project that I’m involved with is one that is collecting data with the goal of expanding to a larger project. Psychologist Ben Brewer and I are interested in examining sleep during bone marrow transplants. We know patients don’t sleep well in the hospital, particularly when they are here for long periods of time. We hope to use the pilot data to create an intervention around improving sleep in the hospital during bone marrow transplant.

I’m also involved with a staff training project related to demoralization in the medical setting. We made a video for nursing staff that demonstrates the difference between demoralization and major depression, which are distinct and have differences in the way they are treated. Demoralization doesn’t respond to psychotropic medication, for instance. We filmed various vignettes, with nurses and other staff roleplaying as patients, to teach staff how to recognize demoralization in patients and how to intervene.

3. Have you ever worked with a patient who has made a big impact on you?

One gentleman with whom I worked during fellowship stood out to me and I think of him often. He was an older gentleman in his 80s who had just been diagnosed with leukemia and was coming into the hospital for several rounds of inpatient chemo. A lot of our work was not necessarily directed toward his leukemia. About a year earlier, his wife of almost 70 years had died and he was still actively grieving.  One day I was talking with him in his room and he mentioned a song from the ‘50s or ‘60s that really represented their relationship. He hadn’t heard this song in 30 or 40 years, but he often thought about it. I went home and found the song and put it on my iPod. The next day I brought him the iPod. It was a fun moment because he didn’t know what an iPod was and I had to explain to him how to put the ear buds in and how to turn it on. It was so moving because as soon as I played the song, he started singing aloud and had tears streaming down his face. It was such a touching moment and he was such a wonderful person to work with.

4. On the personal side, do you have a favorite object in your home, and if so, what is it and what is the story behind it?

Elephants. I have quite a few elephant statues and an elephant pillow in my home. My dad is South African and grew up in Johannesburg. Throughout my life, he planned a family trip there. For many years it was put off, but in 2006 we had the opportunity to see various parts of South Africa and go on safari. I really enjoy animals in general, and there is something about elephants that has always intrigued me. They are extremely empathic animals. It was amazing to see them in the wild. So I keep elephants around as a reminder of the trip, family and the great opportunities I have had in my life travel. The elephants bring up a lot of fond memories.

5.  Do you have a goal that you want to complete in the next several years?

Initially I studied journalism and really enjoyed writing. In the back of my mind for the past couple of years, I’ve had an idea to write a book around what I would call “dating with a disability.” I am fortunate enough to be in a very wonderful, long-term relationship now, but prior to that, I spent many years being single. As someone with a disability, I experienced a lot while navigating that world. I have the idea to combine some of my personal stories, experience and training as a psychologist, and the academic literature around romantic relationships and dating when someone has a disability or other type of challenge.