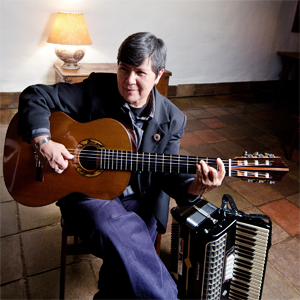 For someone with a wealth of creative talents, time can be an enemy.

“There are times when work seems overwhelming and there doesn’t seem to be sufficient time to read a poem, let alone write one, not enough leisure to compose a letter to a friend, add more photos to my blog, or practice my guitar, no time to walk outside to stand by a creek and listen to the sound of water or watch the circling of a hawk,” says Janice Gould, associate professor of Women’s and Ethnic Studies (WEST) at the University of Colorado Colorado Springs.

The poet, musician, photographer and educator came to CU in 2009. Gould, who already has earned a Ph.D. in English, says she had been on the job market for a couple of years while earning a master’s degree in library science at the University of Arizona. She was seeking a position as an archivist or academic librarian, but with a foundering economy, finding work was difficult.  She expanded her job search to teaching positions – something she had done previously -- and applied to UCCS.

“Neither my partner nor I wished to leave the West, where we had grown up, and where we have family,” she says. “Being familiar with the Rocky Mountain region, the position in WEST seemed like a hopeful possibility. I was offered the position of assistant professor on the day I graduated from UA, and I accepted the offer.”

Both her parents and heritage – her tribal affiliation is Concow (Koyangk’auwi), a Maiduan group from northern California – inspired her love of language and the arts. In a musical household, she had training on the oboe, but was drawn to folk traditions in music, so she learned to play guitar and eventually the accordion. She also enjoyed poetry and began writing and publishing in her 20s.

“At the University of California, Berkeley, I took a degree in linguistics, focusing on American Indian languages, but then applied to and was accepted in the master’s program in English,” she says. “I was able to take classes with poets Robert Hass and Heather McHugh. Bob Hass was particularly influential, as a teacher and as a poet. I love the way he writes about the parts of California with which I am familiar: the Bay Area, Berkeley, the Sierra Nevada, Point Reyes and Tomales Bay.”

1. What is it about poetry that stirs your passion and what do you write about?

My latest book of poetry, “Doubters and Dreamers,” was a Colorado Book Award finalist for 2012 and also a finalist for a Milton Kessler Poetry Award from Binghamton University. In that book, as in others, I write about family, place, relationships, love, landscapes, dreams. I find writing poetry to be enormously satisfying but challenging in terms of finding the “right” language or form.  When a poem “works,” it seems to come close to articulating what I know or need to know, understand, believe and want to say.  I get deep pleasure from being able to talk about poetry (and about the creative process) with others, but those opportunities are all too rare.

(To listen to a reading by Gould during a Native American Writer’s Residency in 2012 at the School for Advanced Research, visit https://sarweb.org/?artist_janice_gould_poetry)

2. How has your Native American ancestry influenced your life?

My mother -- who was Concow, French and Irish -- was born on the Feather River in Plumas County.  It’s a beautiful, mountainous area, forested, with many high meadows. When I was younger, searching for a direction to take in life, my mom told me that if I identified with that part of my heritage that is American Indian, I should be prepared to give back to that community. I wasn’t sure how that would be accomplished, but I realized that in my life as a writer, I had to try to explain to myself, if to no one else, what my mixed-blood heritage might mean, and especially what it means to say that I am Concow. My poetry, in part, explores those complications of identity, which are further complicated by the fact that I also grew up lesbian during a time when gayness was seen as shameful, mal-adapted and a perversion.

3. Much of your photography features landscapes that inspire a sense of peacefulness or solitude. Why do you choose to shoot nature and what inspired you to become a photographer?

I think I started to love the camera when my dad, an amateur photographer, put in my hands – I was about 6 years old -- the camera he used and he told me that I could look through the view finder to find something I wanted to take a picture of. We were in northern Idaho, standing in a field of lupine, under blue sky, and the distant hills were covered with dark evergreens. I snapped a picture of that meadow, and was afterwards enormously proud of that shot, which I fancied very pretty.

I love photography. I consider myself lucky to have been employed at the Center for Creative Photography at the University of Arizona, during my two years as a graduate student earning my master’s in library science. I worked in CCP’s archives, among the negatives, proof prints, papers, announcements of gallery shows, and odd artifacts deposited in blue boxes on those shelves and in file drawers. The artists collected there include Ansel Adams, Edward Weston, Lola Alvarez Bravo, Paul Strand, Louise Dahl-Wolfe, Gary Winogrand and many others. I loved holding Lola Alvarez Bravo’s recipe book, into which was tucked a tiny black-and-white photograph of a distant church tower in probably a Mexican landscape. Or going through the correspondence between Helen Gee and Yun Gee, while Yun Gee was still in Paris, before it fell to the Nazis and he managed to return to the United States.

While I would love to have a film camera, maybe a Rolleiflex, I use a Pentax digital K1000D SLR camera. I feel I could learn a lot from working with black-and-white film. I have taken a lot of “landscape” photos because for the past few years, my partner and I lived far apart from one another (due to employment), and I had many opportunities to travel through gorgeous country. Almost everywhere I have traveled in the Western part of our nation, I have responded with a sense of awe, reverence and quiet admiration for the land. I am never bored by landscapes, and if I had a lot of time, I would take a slow trip through back roads and backcountry in the West and find places to shoot.

I read a lot about photography and photographers, and have a nice collection of photo books, so I continue to try to learn, and little by little, perhaps I am learning where to focus my camera so that it captures a feeling, a mood, a place, or a human face and personality. Someday, I would like to learn more about this art, even take classes.

(To see some of Gould’s photographs, visit her blog at www.jamannapoet.blogspot.com)

4. You have excelled at many creative pursuits. Do you have a favorite and what are some of your creative goals?

Right now I’m practicing flamenco guitar almost every morning very early, but the passion for playing this music is matched with every other interest. I also practice Aikido, which I started learning many years ago, but gave up for a long period. I resumed studying this art a little over a year ago. I’m determined to earn my black belt and then to advance through as many degrees of black belt as I can reasonably do. As there are 10 degrees of black belt, it is a lifetime’s work, and earning my shodan (first degree of black belt) is merely a preliminary step, a bit like earning a master’s degree.

I would like to resume performing music, which I had the opportunity to do while my partner and I lived in Portland. I performed in a trio, which we called Pan Dulce, playing a variety of music from flamenco to tangos to Mex-Tex corridos. I want to dance again, but the style of folk dance I do isn’t available in Colorado Springs. I have considered learning the rudiments of flamenco dance, but you’ll never see me in a polka-dot skirt, and the closest place to study is Denver. What with my commitment to Aikido and the other activities I do, including of course teaching, I’m not certain that’s a goal I’ll reach. I would love to travel more and to be fluent in at least two more languages, Spanish and Portuguese, old loves of mine that I first studied as an undergraduate at UC Berkeley.

5. Do you have a special instrument that you enjoy?

I love my guitars, but at the moment I enjoy playing a flamenco guitar made by a luthier in Paracho, Mexico -- Carlos Piña. Part of the top of that guitar was smashed while I was flying to North Carolina for a poetry gig. I was intending to jam with my friend Craig Womack, another Native American writer and a good singer and guitarist. We had jammed before and like playing music with each other. When I found that the airlines had demolished part of my guitar, I wept for about two hours, then put that guitar away and couldn’t bear to look at it again. This was three years ago. But last summer, I took a road trip out to Oregon. I have luthier friends in Portland -- Jeff Elliott and Cyndy Burton. They turned me on to another luthier in Portland, Greg Miller, and he decided to undertake a repair of the instrument. It took a few months, but he did a gorgeous repair by replacing part of top on the guitar and some other internal pieces. He French-polished the top. The guitar sounds as sweet and resonant as ever, if not more so, and it’s a tremendous pleasure to play.

Tagged with:
Department of Women's and Ethnic Studies