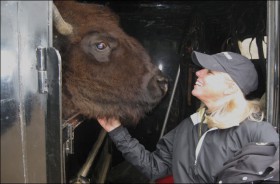 At age 16, Gail Pederson worked at Sears as a "floater," relieving staff in every department, selling everything from shoes to candy to tires to tools. She learned to be flexible – and to work hard.

As the first in her family to graduate from high school, and without financial options, she wasn't considering college. But she received an art scholarship and attended a community college. She worked numerous part-time jobs, including one as a naturalist at a wildlife sanctuary and a switchboard operator at a pro baseball stadium.

She continued her education at Cal State Fullerton, where she received a bachelor's degree in business administration. She was offered a position in public relations with Major League Baseball's Angels and enrolled in graduate school, eventually earning a master's degree in environmental studies, with an emphasis in environmental education and seismology. Then she got what she thought was her "dream job" as a park ranger in southern California.

In the 1980s, driving through Boulder, she says she vividly remembers stopping at the University of Colorado at Boulder, looking across campus to the Flatirons and thinking that she had arrived in heaven. She spent the next 10 years dreaming of living in Boulder and working at CU.

Back in California, as buildings replaced open space, a disheartened Pederson returned to athletics. She worked as director of ticketing/memberships for the Orange County Sports Association, and became the associate executive director. During that time, she visited Boulder as a bowl scout and worked with CU as they played in two Freedom Bowls (1986 and 1988) and the Disneyland Pigskin Classic (1990).

In 1994, her hopes of working in Boulder materialized with a position at CU in athletic marketing.

In 2005, she was offered a job as chief of staff by Athletic Director Mike Bohn. Her list of duties is long and varied. She provides support for public relations, strategic marketing development, donor cultivation and stewardship, along with customer care. Then there's the planning, budgetary oversight, and developing program initiatives. Her background in environmental studies contributed to the development of a CU-WhiteWave partnership for Ralphie's Green Stampede, a zero-waste initiative.

Although a small part of her job, the role of program director of the Ralphie live mascot program garners lots of attention. She's been involved since 1994, working with Ralphie III, IV and now V. She oversees the volunteer directors, the recruitment of team members, solicitation and coordination of donors and sponsorships, development of marketing and appearances, media management, financial planning and game-day field management.

She's certain that flexibility, hard work and a diverse resume have gotten her where she is today. No wonder her motto is "dreams do come true."

1. Ralphie is one of the top mascots in the country. Why do you think she is so popular?

Ralphie consistently is at the top of the polls as the "best," "coolest," and "No. 1" college mascot in the country. She represents the spirit of competition and the excitement of collegiate athletics. She is very impressive at home football games leading the team onto the playing field in pregame and at halftime.Â

With all of our television exposure over the years, fans all over the country have had an opportunity to see her majesty. We coordinate with TV to make sure our runs are a part of the opening of the broadcast. I think there is a national appreciation for all live mascots – they transcend the wins and losses. Even our opponents' fans line up for pictures with her!

For the first time in the history of the program, we actually have two Ralphies. Ralphie IV (nicknamed Rowdy) started running in 1998 when she was 1 and a half years old. Knowing that we wanted to retire Rowdy prior to her passing, we actively pursued a new buffalo and in March 2007 we obtained Ralphie V.

In November 2007, we held "Ralphie's Salute to a New Era" where we introduced Ralphie V to fans and saluted Ralphie IV. More than 3,000 people attended and almost $20,000 was raised in an "Adopt Ralphie" program. Ralphie V made her infamous first run at the spring football game in April 2008 where she escaped from her harness and ended up with only one handler. Ralphie IV made her last official run at the CU-CSU game in 2008 and then Ralphie V took over the helm. Ralphie IV is semi-retired, still making appearances.

2. How are Ralphie's handlers chosen and about how many students apply every year?

Each year we have anywhere from 20 to 50 students apply to be a handler. We require a written application, and prior to the spring football game in April, applicants are invited to tryouts that include timed 80-yard runs along with an informal evaluation. The top candidates are invited for a panel interview.

We have an incredible team of 14 handlers who all earn a letter by participating in the program. They are required to be full-time students (we have two grad students this season), follow the CU Code of Conduct, maintain their GPA, assist with the feeding and maintenance of both buffaloes, participate in 6 a.m. strength and conditioning sessions twice a week, participate in two weekly practices with Ralphie, and attend all home games and appearances.

In addition to the student handlers, we also have three directors who volunteer their time for training and maintenance of the program. All three directors were handlers when they were students at CU.

3. What does Ralphie do and where does she stay during the off-season?

When not appearing at the stadium for a game or an appearance, Ralphie is busy being a normal buffalo. She has a pasture and is in a private and protected location. (For her safety, we do not even allow media interviews at her site). Some exciting appearances have included being a part of the television programs "Man vs. Food" and "Untamed and Uncut." She appears at the annual Ralphie's Fourth of July Salute at Folsom Field and makes appearances in conjunction with her corporate sponsors. And of course at each home football game she appears at Ralphie's Corral behind Duane Physics and poses for pictures. She even donated some of her tail hairs to CU's molecular, cellular and developmental biology Professor Mark Winey for his classes and research on the genetic diversity of bison and the cross breeding with cattle. The results verified that she is 100 percent bison!

4. What would you consider the best part of your job? What is your least favorite or what would you change about the job if you could?

The best part my job is that I get to work with a dynamic leader like Mike Bohn and a great staff that is dedicated to our student-athletes and their success both on and off the playing field. The job is never boring and never ends at 5 p.m. Our athletic events are as important as our workday is, so sometimes I work seven days a week. It's really not a job; it's a part of your life!

And after 16 seasons, I still experience an adrenalin rush prior to each of Ralphie's runs. I am on the field at all times with her and it seems to all happen in slow motion. I think I actually stop breathing for her entire run; it's an amazing experience!

The least favorite part of my job is dealing with frustrated fans. It breaks my heart when some fans forget that we have a great group of student-athletes who work hard not only in school, but in practice and in competition, doing so because they love their sport and CU. I would wish that everyone could meet our student-athletes to really know them and appreciate their efforts.

5. When you have time, what are your passions outside the university?

I am very passionate about animal welfare and wildlife preservation. I have even served as a "bat monitor" for the city of Boulder. My favorite charity is the Boulder Valley Humane Society and I volunteer with their events as often as possible. I have a 150-pound Great Pyrenees mix that is my "mini Ralphie" who always gives me the once-over when I come home from practice smelling like a buffalo! I love to hike and, with the addition of CU's new golf course, Colorado National Golf Club, I have discovered a love for golf. Each day I drive in from north Boulder, I look across campus to the Flatirons and give thanks for my dream come true!

Send your thoughts and suggestions for the Newsletter.
END_OF_DOCUMENT_TOKEN_TO_BE_REPLACED