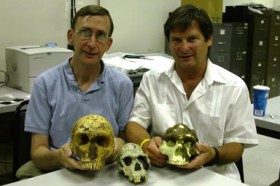 If you could only use one word to describe Fred Coolidge, it would be enthusiastic. If you were allowed a second, it might be fascinating. A third? Storyteller. Perhaps that is why the professor of psychology at the University of Colorado at Colorado Springs has been honored with numerous teaching and research awards, including being named a President's Teaching Scholar and being given three Fulbright Fellowships.

Even seemingly complicated (and terrifying) subjects become eminently understandable – and fun – under the tutelage of professor Coolidge. Teaching statistics is one of his favorite classes, but sometimes students need a bit of coaxing. He says everyone gets excited about abnormal psychology, but statistics?

"You'd think you were killing someone," he says, remembering one young woman found holding her head in her hands, crying, at the prospect of having to take the class. "I found I loved changing their attitude."

Statistics, says Coolidge, who has been at the university 30 years, provides us with either the means or the principled arguments for making decisions. It's about converting the world into numbers and making decisions based on the data. "I'm turning these people into more critical thinkers."

He compiled his handouts from the statistics class and sent the package off as a book prospectus. It became "Statistics: A Gentle Introduction," for which he has just signed a contract for a third edition.

Coolidge has authored several other books and research papers on a variety of psychological topics. For the past 10 years, he has collaborated with professor Tom Wynn to study Neanderthals and why these smart human predecessors became extinct while modern man flourished. Coolidge and Wynn theorize that a rewiring of the brain thousands of years ago gave Homo sapiens the ability to plan and strategize, which allowed them to deal effectively with their harsh environs. Neanderthals weren't so lucky.

1. You've teamed up with Tom Wynn, a professor of archaeology at UCCS, to research cognitive archaeology and possible reasons for the extinction of Neanderthals. How did the collaboration come about?

I was reading an article that said Neanderthals didn't have language, and I said, that is just wrong.

Neaderthals had larger brains than modern humans, so why didn't they survive? So I began to think that maybe we out-thought them. Maybe the genes for decision-making came online (and that's why we outlived them).

So I went to his office and said, "I think Neanderthals had language – maybe not all the accoutrements of modern language, but language." Wynn said that was consistent with archaeological literature. He said he could provide the evidence if I'd write it up.

When I was 5, my parents said I couldn't become an archaeologist because there were no jobs. They were a product of the Depression. But I wrote it up and it became "Executive functions of the frontal lobes and the evolutionary ascendancy of Homo sapiens" and appeared in the Cambridge Archaeological Journal in 2001. Finally I was an archaeologist of sorts and that led to this collaboration.

2. Another area of your research is behavioral genetics. What is some of the work you've done in that arena?

I'm interested in the biology, the functions, of homosexuality. Is it a choice or a biological predilection?

We have a guy here in Colorado Springs, James Dobson (who until last year was the evangelical leader of Focus on the Family) who says there's no evidence homosexuality is biological. Not a shred. And he has a Ph.D. in psychology. Then, during an interview, a bigger lie came. He said his beliefs had nothing to do with his religious opinions.

I looked at 200 twin pairs and found GID was a high heritable trait. There's your shred of biological evidence.

I also studied nightmares, which is another highly heritable trait. Of course, daytime anxieties can create extreme nightmares, but it also ties back to evolution.

I looked at the most common dreams of college students – falling and being chased. These dreams may be evolutionary adaptive. When you dream of falling, you're dreaming an old dream. Lucy, our closest ancestor, slept in trees, lived in trees, played there and suckled her young there. Falling would be a natural fear. If you had that dream, even if you didn't have language, you could do something about it. You might become better at making your nest in the tree and then be more likely to adapt and survive.

3. What are you currently researching?

I started thinking there might be a feral basis, an ancient basis, a cognitive basis for abstracting. It's a pretty sophisticated ability and could reside in language. It's found in numbers and it's called numerosity (the ability to approximate numbers). Nine-month-old babies can do it and so can monkeys. Infants can subitize, in other words, they have a sudden awareness of things fewer than four. They know the difference between one, two, three and four. This could have been useful in an evolutionary way. It would be important to know the difference between three predators and one predator. The decisions made upon seeing one or four predators would be different. It's a pretty incredible trait.

There's a feral, cognitive basis for abstraction and that abstraction is the basis for symbolism. When you show this to adults, even monkeys, a certain part of the brain – the intraparietal sulcus lobe, which plays a role in number processing – lights up. When you compare our brains with a Neanderthal's, it would mean we have the higher ability, which could also have led to our survival.

I'm also writing a book – "How to Think Like a Neanderthal" – for the masses. It's for people like my brother who didn't go to college but is very intellectual. He's a carpenter and can build a spiral staircase. The book, literally, is about how Neanderthals thought. 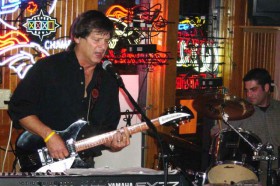 4. You are a collector and are also very musical. What else do you do in your down time?

My wife said, "Look, he's got a package from eBay." And then she opened it up and it was a skull. She said that was the last time she'd ever open one of my packages. I collect replicas of skulls for teaching purposes. I have nine different ones reflecting our history. For my birthday, my brother asked me what I wanted, and I told him an ape skull. And he got me one. The replicas aren't cheap, but I save up.

I also love mammoths, which were suddenly extinct 10,000 years ago. I have all these old mammoth teeth and bones, a rib, tusk hair ... I'm almost ready to clone them. Wouldn't that be cool, having a baby mammoth running around your backyard?

Two years ago, when I turned 60, I decided I needed to do something manly. My wife said I should do some gardening. But three friends and I met in Little Rock, Ark., and bicycled 70 miles a day to Gainesville, Fla., where several of us earned our Ph.Ds years ago.

I've played in several bands. For 10 years, I was in a band called Pink Freud. Then there was the Cellar Dwellers, which was rock. I jam with a couple of people doing original songs. And now we're playing Irish drinking songs.

5. What would you like students to take away from your class?

It sounds trite, but I want them to know how to think critically, how to see through the baloney and be a more educated consumer and have some immunity against the scams.

My statistics class isn't just about numbers and graphs and charts, it's about life. Statistics has three roles: curious detective, honest attorney and storyteller. The class investigates life, often by looking at the truth behind an advertisement. This semester, the class took a critical look at a claim that a laser light could grow hair.