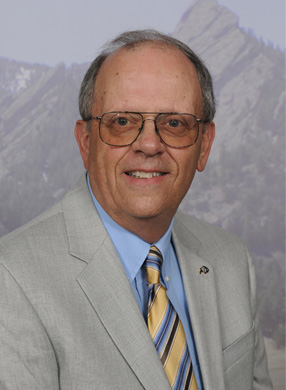 Souvenir ticket stubs and team photos share space with textbooks and journals in David Clough’s office. There’s no doubt he’s a sports fan, but his biggest rooting interest is the students – athletes and nonathletes – whom he helps educate at the University of Colorado Boulder.

A professor of chemical and biological engineering, he also serves as the university’s Faculty Athletics Representative. A cartoon on his bulletin board sums up the three major responsibilities of the latter role: institutional control, academic integrity and student athlete welfare. He acts as a liaison between the university’s athletic programs and faculty, and works “to know and be known by” the 350 student-athletes on campus.

His ties to the university date back to the late ‘60s, when he earned his master’s degree. After a three-year professional stint at DuPont, he earned his doctorate in 1975, also at CU-Boulder, where he has taught ever since.

“I ask of my class, every time I start the semester, ‘How many of you in this room did I teach your parents?’ This time there were two hands,” Clough says. “The first time a youngster comes up to me in August and says, ‘My granddad had you,’ I am out of here.”

Retirement would mean more time with his wife, Sydney, their four children and four grandchildren; more time for travel, golfing and fly fishing. Until then, he looks forward to serving as president of the national Faculty Athletics Representatives Association, starting next year; more immediately, he’s eager to witness the Buffaloes’ first official slate of conference games in the new Pac-12, which kicks off Saturday.

1.  What differences do you see between the student-athlete cultures of the Big 12 and the Pac-12? 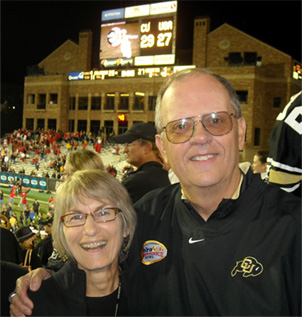 David Clough and his wife, Sydney, are all smiles after the Buffaloes’ victory over Georgia last year.

I don’t expect dramatic difference there. The Pac-12 tends to give more emphasis and highlight to the Olympic sports than the Big 12. If you wanted to oversimplify it, you would probably say that the Big 12 is primarily a football and, to a lesser extent, basketball conference, whereas the Pac-12 is overtly proud of their 400 NCAA championships, many of which have occurred in sports that are not football and basketball – track and field, cross-country, swimming, gymnastics, tennis, golf, volleyball. So there’s that difference. In my work here, I try to pay particular attention to those sports and their athletes. I’m pretty democratic. I wouldn’t consider myself to be a football guy, though I do follow our football program very closely. But I can tell you all the names of our women’s tennis team or our women’s volleyball team. I don’t have all the soccer down yet, but I’m working on it.

There may be the exaggerated impression out there that the Pac-12 represents a collection of premier institutions, and the Big 12 is a collection of land grant colleges and ag schools that are at a lower level. That’s incorrect. Let’s be fair: The majority of the institutions in the Big 12 are Association of American Universities institutions. In shades of gray, culturally, we are more at home among the Pac-12 institutions than the Big 12. But it’s a marginal statement. One of the most dramatic differences we’ve got with this change is how the other institutions in the conference are so near so many Colorado alumni.

2.  You pay a lot of attention to the statistics that make up the Academic Progress Rate (APR) and the Graduation Success Rate (GSR). What effect are these measures having at CU-Boulder?

They’ve had a dramatic effect on the academic side.

One thing I’ve observed in my six and a half years as FAR is a real change in the culture of coaches – where they talk academic success and graduation a lot more than they used to. It’s part of their vocabulary. They’re extremely competitive individuals, so if it is laid out in front of them as, ‘In order to compete successfully, your athletes have to be successful academically,’ they will step back and say, ‘I compete. Here we go.’ In particular in football and men’s basketball over the last year or two, we’ve shown tremendous improvement in academic success and Academic Progress Rate. This has yet to be demonstrated in graduation rates as much as it will down the road, because it’s a pipeline issue.

I’m very appreciative of how our coaches have embraced all that, and think they feel good about it, too.

3.  You’ve received many accolades over the years for your work at educating and advising students. How do you describe your philosophy in these areas? 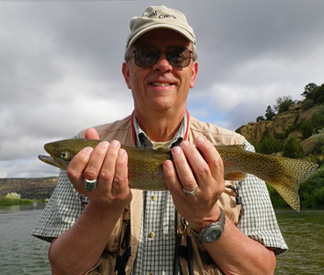 I think it’s really important for faculty to see themselves in a role, and that’s to help students. That sounds very simple, right? But that requires, in a general sense, a sympathetic approach. In other words, trying to understand through listening what the situation is with a student. It requires considering the career of the student to be important. It’s stated in some very simple terms, but it’s very important that students here at the university feel that people in a position like mine truly care about them.

I’ve always enjoyed getting to know the students. It’s great fun to follow them in their careers down the road, too.

4.  You first came to CU-Boulder in 1968 and started teaching here after earning your doctorate in 1975. What about campus life has changed the most over the past 43 years?

The late ’60s were a different time on this campus, all right? It was a very unsettled time of protest and a great deal of uncertainty in terms of what was happening in the country and Vietnam. I think most of the population of the country has lost touch with what it was like under the draft. It changes perspectives on things.

In my own field, we’ve seen tremendous improvements in the education we provide our students. We are able to give them so much more today than we could then. That’s just my long-view perspective. They can’t appreciate that because they have no idea. I was talking with a student today: So many of the things I learned from experience – after I graduated – she knew already. And she’s a junior in chemical engineering. We have improved a lot in our ability to deliver quality education. People will always complain and think we could do so much better – and I agree. But at the same time, I think you have to take a look backward and see where we’ve come from.

5.  CU is in the midst of a historic comprehensive campaign, Creating Futures. Your family established a scholarship endowment in engineering at CU in honor of your late father, who was a chemical engineer. What outcomes have you seen from giving back to the educational institution where you studied and where you now serve?

It’s a small endowment, but it’s grown fairly nicely. Even something done at a relatively meager or low level, like what we did, it’s rewarding, primarily in gaining an understanding of who the endowment helps. In other words, the personal stories of the individuals who have been helped through scholarships from the endowment yield.

It’s also beyond rewarding, in that I almost make it into a necessity. One could do this in many ways, but it is very important to do something to help. I think that’s a human need, and this is certainly one way of doing it.

It’s curious in the United States how strong the loyalty is to institutions of higher education from alumni. The true blue, “I’m a Michigan man,” whatever you want to say – I’ve lived in other countries and it’s really not there. It’s an interesting cultural phenomenon. In other countries, it’s almost like a transactional situation: “I paid money, you gave me an education, I’m out of here. Don’t bug me.” It’s not that way in this country.

It’s a weird phenomenon, but at the same time, it provides an environment for loyalty. I think loyalty satisfies a normal need for belonging. Loyalty is important. Giving associated with that loyalty is a natural thing for people to do with respect to universities, because it’s the gift that keeps on giving. I always tell people that if you get into a position where you might do something, this is a win-win deal.

David Clough with his wife, Sydney, during a horseback-riding excursion in Montana.