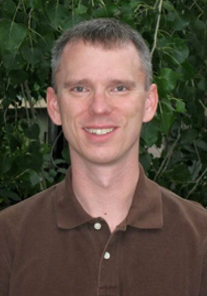 The 1981 launch of the Space Shuttle Columbia – the first in NASA’s program – made a big impression on the grade-schooler who, after watching the lift-off on television, wanted to know everything about space.  “Minor course corrections” since then have led David Brain to his current research interests and his position as assistant professor in the Laboratory for Atmospheric and Space Physics (LASP) and the Department of Astrophysical and Planetary Sciences at the University of Colorado Boulder.

Globes of Mars, Venus and the moon – the subjects of many of his studies – sit on his desk, a visual cue as he considers the atmosphere and magnetism – or lack thereof – and the saga of each. This is his second year as a faculty member, but he first came to CU in 1995 as a graduate student in the same department. He is one of the scientists working on the MAVEN (Mars Atmosphere and Volatile EvolutioN) mission, which will launch in November and is scheduled to arrive at the Red Planet in September 2014. He also is a member of a CU-led NASA Lunar Science Institute devoted to studies of the lunar atmosphere and dust.

Brain and Nick Schneider, an associate professor in the department, teach thousands of students in college lecture halls around the world about the newest planetary discoveries through slide sets they prepare. Discoveries are made so often, textbooks are unable to keep up. Almost daily, planets around other stars are found or discoveries are made by spacecraft orbiting planets in our solar system, so the pair must choose the most important findings to release through the three-slide sets every four to six months.

Since he’s begun teaching, Brain says he feels “connected to thousands of years of humanity who have looked up and seen the same things in the night sky. I’m amazed that the cultures were able to piece together what they were looking at and use it to make predictions about what the sky would look like in the future. These were civilizations of people who had as their night-time entertainment what was happening in the sky, and they were astute enough and shrewd enough to figure it out.”

1. One area you study is the loss of atmosphere on Mars. What happened to the planet and can the same thing happen to Earth?

Mars has a very thin and cold atmosphere today. That’s surprising because when you look at pictures of the surface, you see dried-up riverbeds, old lakebeds. You can see that there was once an environment capable of supporting liquid water at the surface. The big question that’s excited me for a long time is what happened to Mars? What changed the climate? One of the essential ideas about climate change on Mars – one that many scientists think is valid -- is that the atmosphere used to be much thicker than it is today. So how do you lose an atmosphere? There are only two places to go: up or down. On Mars, we know both happened. As a grad student, I became interested in the “ups,” the escaping away to space of particles from the atmosphere. We know this is happening today but we don’t know how responsible it could have been for changing the climate.

On Mars, a large fraction of the entire atmosphere may have been ripped away. On Venus, which has a thicker atmosphere, the same processes have made the atmosphere dry. All of the components of water – hydrogen and oxygen – are nearly gone.

2. What is your role with the MAVEN (Mars Atmosphere and Volatile EvolutioN) mission and what do you hope the data will tell you?

MAVEN will look at the “ups” I described, and for the first time we will have all the observations we need in one place, on one spacecraft, at one time. For the past 20 or 30 years, we’ve been approaching these problems using incomplete information and guesswork. MAVEN is led by Bruce Jakosky in the geology department, who is the principle investigator. There are about 30 co-investigators who each have a role. Some are responsible for designing and building the instruments and some will study MAVEN data as part of the instrument teams. Then there are six of us who aren’t affiliated with any single instrument, and we’re called interdisciplinary scientists. We’re expected to take data from multiple instruments and merge those data sets together to help answer the questions of what happened to the Martian atmosphere.

This is the first time I’ve been involved in a spacecraft project from start to finish and it’s a fantastic experience and a great team. Every time I talk to someone from NASA they gush about how well MAVEN is being run and what a good project this is.

3. What’s the biggest change (or discovery) you’ve seen in your field in the past 20 years?

In all of planetary science, the biggest change is the discovery of planets around other stars. The first one was reported in my first year of graduate school (1995). Before that, we knew of nine planets, including Pluto. Now we know of 700 to 800 in our galaxy, and we have maybe 1,500 more that are probable planets waiting to be confirmed. This has really opened up our horizons in planetary science and also has drawn a bridge between planetary science and astrophysics.

In my own area – Mars, climate evolution and the moon – the most significant thing is the discovery of magnetic fields on Mars. I said before that there’s no global magnetic field at Mars, but there are magnetic regions in the crust that were discovered in 1997 by an orbiting spacecraft. The regions are incredibly strongly magnetized – 10 to 20 times more magnetized than any naturally occurring rocks we know on Earth – and their presence has implications for the Martian interior, near surface, radiation environment and climate.

4. You’ve also done some research on comet and asteroid impact. We recently had a large asteroid come very close to Earth and a large meteorite that exploded before impacting Russia. How common is this and what would happen if an asteroid the size of 2012 DA14 collided with Earth?

There are things that hit Earth’s atmosphere every day, but most are small. Shooting stars, for example, are caused by something no larger than a pea. Something bigger – basketball-sized – happens less frequently because there are fewer basketball-sized objects out there. Then you get to the size of what hit the atmosphere over Russia, and that happens every 80 years or so. The small objects entering our atmosphere burn up before reaching the ground. The same thing happened in Russia, but it was large enough and got so hot on one side that it exploded.

The near miss was a complete coincidence. Things cross the Earth’s orbit all the time. NASA and astronomers know there is a population of objects that could potentially crash into Earth someday. They fund a NEO (Near Earth Object) program with a goal of identifying 90 percent or more of the objects in the solar system that are 1 kilometer or larger and could potentially strike Earth. They’ve been doing this for a decade or so. A couple of years ago I was on an advisory panel for this program. One kilometer is pretty big and would have a devastating impact. The Russian fireball, for instance was only 17 meters across; 2012 DA14 is nearly double that size, but still much less than 1 kilometer.

If a 1 kilometer object hit the Earth, the effects would be devastating. Hot material from the impactor and material heated from the impact site when it crashed would get splashed into atmosphere and rain back to Earth, causing fires over a very large area. There would be tsunamis. And that’s just the first few hours. For weeks and months, imagine all the dust and smoke. Sunlight would be blocked and it could become dark and cold on the surface. Over years, the material in the atmosphere could contribute to greenhouse warming of the surface. The atmosphere may become poisonous. For larger impactors (approximately 20 km, or the size of the dinosaur-killing impact), all of these effects would be amplified globally. Plants would stop growing and acid rain could kill vegetation and ocean life. There could be mass extinction.

5. Many people felt as if they lost a friend when Pluto was demoted.  What do you think about the move?

It was the right decision to demote it. I understand the emotional attachment to having nine planets, including this little object, named by an 11- year-old girl. But we have rocky planets close to the sun – Mercury, Venus, Earth, Mars – and we have big gas balls far from the sun -- Jupiter, Saturn, Uranus, Neptune. All of these objects are considered planets. Then, really far from the sun, we have a reservoir of icy comets. Pluto fits better with the comets, but it is so much bigger than a typical comet that it deserves its own class. And that’s what happened: Pluto is one of five known dwarf planets in our solar system. In retrospect it seems that the decision to demote it was made in haste, but ultimately I think the right decision was made. What excites me is the prospect that there are many more dwarf planets waiting to be discovered, perhaps 10 or more in the years to come.