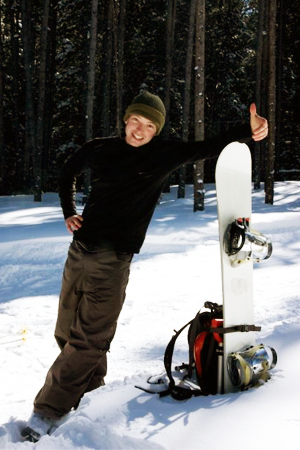 His goal is to make mountains into molehills, to take thousands of tons of “waste” material and divert it away from landfills for reuse or for recycling. As the University of Colorado Boulder’s recycling program manager, Daniel Baril has helped strengthen the campus’s efforts of sustainability through a variety of programs. In 2011, the campus produced 5,183 tons of waste material; 2,166 tons, or about 42 percent, was diverted.

As a student studying social entrepreneurship at Babson College in Massachusetts, Baril volunteered with a campus recycling program run by two students; later, he took over direction of the enterprise. The program was tiny – so tiny that the sorting area consisted of a table in a basement – but successful. At the same time, he volunteered with clean-up crews following music festivals. The work produced two results: He was able to gain free admission to the events to feed his passion for song, and he was inspired to do something about the massive amount of waste produced when large groups of people get together.

His volunteerism led to internships and jobs, including one summer gig where he worked with the city of Nashua, N.H., at a landfill.

“I saw the trucks and truckloads of trash that came to the facility on a daily basis. It was all piled into a huge mountain. Next to it was the recycling area, so you could also see the tons of material being diverted away from burial in the ground,” he said. “It really boosted my passion for recycling and seeing that we can impact the world for better or worse depending on what we do.”

Baril also conquers bigger mountains. His other passions are rock climbing and snowboarding. One of his proudest achievements is climbing the Diamond – the sheer, eastern face of Longs Peak this year.

1. What would you consider one of your most successful “green” efforts on the Boulder campus?

One of the biggest and most noticeable is our Zero Waste effort at Folsom Field. Ralphie’s Green Stampede is a big partnership that has successfully diverted 70 percent to 80 percent of stadium waste away from the landfill. Our goal is a 90 percent diversion rate at some point. We’ve worked with concessionaires so that they only provide compostable products and because of that, we offer only compost and recycle bins to the public. By default, people are composting even if they don’t fully understand the process. To keep contamination out of compost bins, we have a group of volunteers –zero-waste goalies – who help people put items in the right place. And at the end of each game, we set up a sorting process. We make sure that the compost is clean so our composting company won’t have a reason to turn it away.

2. What are other successes you’ve had?

One general success is working with students to help them into a professional experience so they can take real-world skills and focus their passions to create positive change. This is my sixth year here; I’ve seen a handful of folks graduate and get environmental jobs, so I see that as a great success. It’s something I have a positive influence over.

Another is our student move-in and move-out recycling process. We’ve expanded the move-in program to capture more material – we’ve started collecting Styrofoam – and we have recycling ambassadors available to make the recycling process easier. We’ve definitely increased our move-out efforts and have worked with a variety of organizations to channel more reusable items -- clothes, small furniture and appliances – into the community. This year was our most successful: We collected more than 20 tons of reusable items. In 2006, we collected about 4.5 tons, and in following years, we’ve collected at least 10 tons. But this year was by far our best.

3. Are students – and the public in general – more receptive to recycling in 2012 than they were five or six years ago?

On the whole, people’s attitudes toward recycling have improved; the awareness has improved. There’s more talk about zero waste and composting efforts. That said, there are still groups of people who are apathetic and don’t put in any effort to separate waste. We are seeing more people come to CU with a more positive mindset toward the environment and that impacts actions here. I don’t know if it’s parents who are teaching children or whether they have encountered other green efforts in elementary and high schools, but they arrive with more knowledge. For those that don’t have an education around sustainability, we try to open their eyes. 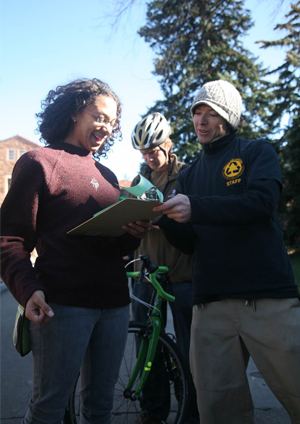 I think the convenience of recycling makes it a lot more possible to reach goals. We strive to have those easy options at CU, especially for those who don’t want to put any effort into it. For instance, wherever we place a trash can, we try to have a recycling bin next to it so there is always an option to recycle. It’s a big part of the process, to get more people excited about and engaged in the efforts.

4. CU has made it easier to recycle, but has the industry made the same efforts?

There is a shift in how the industry sees things. Instead of talking about it as waste management, they talk about resource management. They are right, these are resources that were pulled from the Earth and can still be used as a resource for new products. Hopefully the idea will spread to the public and if they see what they are holding in their hands as resource and not trash, they’ll probably think more about what to do with it.

Industry is now able to accept more plastics, from Styrofoam to film plastics such as candy wrappers or potato chip bags. To the consumer, all plastics are the same, but each polymer has its own properties and requires different handling.

Composting also has been a huge area of growth in the industry in the past four or five years. Technology has allowed us to create a plastic polymer out of corn starch, and since it is carbon-based, it can be composted back into organic matter.  More events, including our football games as well as others around the country, use serving ware, plates and napkins made from this process so everything from the event can be composted.

5.  What changes still need to be made to boost recycling efforts?

I think more people are recognizing the importance of recycling; not just consumers but also the large municipalities and decision-makers, including the administration on campus. It always seems as if we could place more emphasis on it, make it more of a priority. Unfortunately, our society is built around disposability. So many things are made for a single use. You drink coffee in a cup for 10 minutes and then throw the cup away. We grew up with that mentality and society and big business pushes it on us. We’ll always be battling against that, which makes recycling and reuse less convenient. There’s a disincentive to put reuse into life habits. We have to remember the mantra of “reduce, reuse, recycle,” and in that order. We must reduce first, then reuse, and make recycling the last step and only use it if we can’t reduce or reuse.

Send your thoughts and suggestions for the Newsletter.
END_OF_DOCUMENT_TOKEN_TO_BE_REPLACED