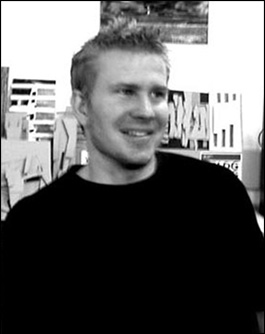 Clark Thenhaus discovered architecture and design in the fourth grade; his interest never waned. After earning his graduate degree on the East Coast, he moved west to work for an architectural firm in Los Angeles. While there, he was introduced to teaching.

In August of 2010, he began teaching landscape and architectural design in the graduate program at the University of Colorado Denver while beginning to establish his own studio. He currently teaches the Advanced Design Studio and digital applications seminar and serves as the spring 2011 exhibitions coordinator for the College of Architecture and Planning.

Thenhaus has changed his focus for now, moving away from the world of bricks and mortar into an area where forward-thinking possibilities are realized through technology.

His designs, he says, serve as models of investigation for numerous issues. His newer work showcases "surface geometry and spatial affects (color, texture, light and geometry/form) that are beyond the mere satisfying of the program/function but approach new considerations of architecture and its role with regard to people and/or place."

1. You recently received a special mention award in the d3 Housing Tomorrow 2011 international architectural design competition for the Farm House, a design for farm workers. Can you tell me about this design?

The design for the Farm House is considered extra-urban, a realm of housing often left unaddressed. The project was developed in response to a call for novel ways of considering the future of housing. The Farm House approached housing in a hypothetical manner as having potential to ease ground and surface water withdrawals for agricultural irrigation. This project proposes a small-scale home capitalizing on hydrological cycles – harvesting rain water for the purposes of irrigation – while providing seasonal housing for legal farm laborers, who often live in less adequate housing.

Water has become a critical concern, especially in the areas of industrial production and agricultural irrigation, the two largest consumers of fresh water. The Farm House addresses these water issues through collection, storage and distribution of rain water to irrigation infrastructures using the building's exterior skin. The 800-square-foot Farm House, formed around a center point, creates five distinct interior zones for sleeping, hygiene, cooking and closet/storage spaces with a centralized living space. The capacity of the house to perform like a cactus in biology or a canteen in technology enables the home to become an integral component in the operations of food productivity, easing withdrawals on river systems and aquifers.

I designed the skin, composed of rubber "canteens," as an assembly of elastic membranes. The elasticity allows the skin to collect, store and distribute rain water. This has much to do with my interests in the interactions between architecture and its context. The skin indexes the hydrological cycles through the swelling and contraction of the elastic skin as it fills with, and releases, water. This allows for tracking the environment through the dynamism of the building form and texture. As the canteens fill with water diverted from the roof catchment, the skin stretches, revealing an underlying hexagonal patterning.

The change in form – from thin to thick – provides a visual measure of hydration conditions. One canteen skin can hold up to 17,000 gallons of water, making for a total capacity of 34,000 gallons between the two canteen skins. Using an annual average of rainfall in the Midwestern United States of 36 inches, the canteens could fill numerous (approximately 20) times per year to full capacity, establishing an indexical relationship with its environment and agrarian production.

2. Have you always developed designs that are meant to integrate with the natural surroundings? Why is this important to you? What other goals do you want your designs to achieve?

I have been interested in the integration of architecture with the context since graduate school. Using such strategies allows architecture to become less object-oriented and more comprehensive, allowing for new models and processes of performance and spatial affects.

For instance, in the Urban Garden, landscape and architecture are nearly camouflaged as a comprehensive landscape building. Other times, integration might simply mean considering atmospheric qualities such as light or color. The Star Garden project converts abandoned silos across the Midwest into gardens of light and dark for leisure purposes using a perforated dome. The perforations are calibrated to constellations in the night sky. The kaleidoscopic array of light during the day cast by the perforations creates a thickened, tranquil and purplish atmosphere. At night, the dome serves to individuate constellations and serves as a device for star gazing. And, of course, the Farm House was developed with an elastic skin that swells and contracts relative to rain water intake and irrigation need, thus indexing hydrological cycles with food production.

I think these types of investigations are important because they serve as new ways of considering space, form, affect and performance while capitalizing on contemporary technologies and digital techniques in service of compelling design.Â

3. What is the most important thing you want your students to take away from your courses and why?

One important thing, among others, would be a way of thinking and a general spirit toward their work. How one thinks about or processes the role of architectural design that might not be understood as conventional, yet is plausible and doesn't depend on a priori notions often lends to truly unique solutions. This thought process can then lend itself to or be augmented with current technologies in design and fabrication, the handmade, or combined procedures that catalyze otherwise unforeseen ideas and strategies in design.

I think it's important to tow the line between exploration/experimentation with new technologies and temper that with fundamentals in design and representation to yield plausible responses to a given design problem. I also encourage students to be exploratory and immerse themselves into procedures or techniques they wouldn't otherwise consider in order to be forward-thinking and thought-provoking concerning design ... to consider the potential of what they are making.

4. What about Denver's architecture? Any standouts? Anything that should be demolished right now?

I think Denver could be a city on the cusp and in the conversation of relevant architecture over the next decade or so. It's attracting younger practices that bring new ideas, energy and technology to the scene, much like San Francisco did in the late '90s and early 2000s. Geographically, Denver is unique given its proximity to the mountains as well as the plains, and coupled with seasonal changes, offers interesting ways to consider design in multiple environments with close proximity to an urban center.

I think a lot of the work of the 1980s could come down. However, that is not specific to Denver.

5. What are some hobbies or pastimes you enjoy away from architecture?

I find this to be a shifting target. Before heading to the East Coast for grad school, I was big into fly fishing for many years. I had many good friends – growing up and as an undergraduate – who also enjoyed it, so we'd often head off for days at a time to find new rivers to fish.

While back East, I found new interests in art and music. I enjoy exploring the local music scene and enjoy music by lesser-known bands, and that continued when I was in L.A. I also added interests in water activities, such as boogie boarding and sailing. Since I returned to the Denver area, I have a renewed interest in photography and I imagine fly fishing will again become a summer staple.

Send your thoughts and suggestions for the Newsletter.
END_OF_DOCUMENT_TOKEN_TO_BE_REPLACED