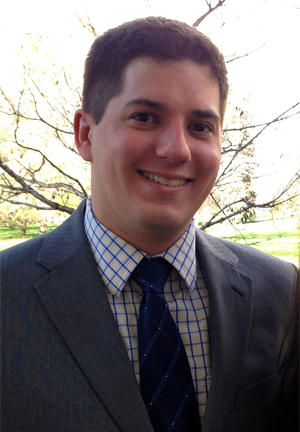 A framed certificate of appreciation hangs on the wall of Brian Cadena’s office at the University of Colorado Boulder, where he has worked since 2008. He served as an adviser to a first-generation college student who “did an incredible job on his thesis.” Cadena was invited to the honors student’s graduation party where the young man presented “awards” to all the people who had helped him complete his dream.

“I was really touched that he had made (a certificate) for me. He went on to law school at UT-Austin, and I couldn’t be prouder of him,” says Cadena, an assistant professor of economics, who has won a variety of awards and honors, including a Stanford Calderwood Faculty Teaching Award in 2012.

Cadena says he stumbled into economics. “I was a psychology major in college and, at the time, I thought I would become a lawyer. A friend suggested that I take an economics class so that I could relate better to people in the business world. When I did, I realized that most students found the material difficult and boring. I thought it was fun, intuitive and really interesting. Like a good budding economist, I realized my comparative advantage, and I never looked back.”

Much of Cadena’s research focuses on poverty, immigration and the labor market, interests that he says likely were sparked by his mother, who is a social worker. As an undergraduate, he conducted an empirical investigation into whether reform helped the material living conditions of single mothers (it did). He followed his interests at the University of Michigan’s department of economics, which had won several years’ worth of funding to establish a National Poverty Center that would support poverty-related research. There he began working with affiliated faculty on projects related to low-income families’ experiences with the social safety net and the reforms of the 1990s.

“I became interested in immigration because I wanted to see how two important sets of new entrants to the labor market – welfare leavers and new immigrants – influenced each other. I ended up finding that immigrants were quite good at choosing labor markets (cities) where they would face less competition from this other set of new entrants,” he says.

1. There has been lots of discussion about raising the minimum wage for workers. What are the pros and cons of this idea in relation to workers and the economy?

The pros: First, increasing the minimum wage would increase living standards for minimum wage workers, which would help reduce income inequality. There’s a nice study showing that when the minimum wage fails to keep up with inflation, it tends to exacerbate inequality. Having said that, we would want to consider how these changes would affect the Earned Income Tax Credit (EITC) as well. Under current law, someone working full-time, full-year at the minimum wage is eligible for the full credit, but that credit starts to phase out for people earning around $17,500 or the equivalent of full-time, full-year work at roughly $8.50 an hour. Also, there’s some evidence that an increase in the minimum wage reduces turnover (quits, firing, hiring), which could lead to additional training and career advancement opportunities as well as increasing the efficiency of the economy.

The cons: On the other hand, there’s some new evidence that increasing the minimum wage would reduce future employment growth even if it doesn’t lead to people losing their jobs immediately. Also, we’d expect to see price increases for goods and services in industries that rely on minimum wage employees. Finally, in the long run, it’s possible that a higher minimum wage would encourage employers to implement labor-saving technology. There’s actually some nice evidence for this type of behavior from the immigration literature. In parts of the country where immigrants tend not to settle, businesses are faster to adopt automation technology. A substantially higher minimum wage could easily lead to similar results.

2. Reports show a growing economy but many people are still struggling. What do you consider important factors for a robust economy and what needs to be done to reach a more prosperous condition?

Inequality is certainly a big problem, as is the lack of mobility out of the income class into which people are born. I think when we’re thinking about prosperity, we want to separate the question of how to get the labor market back to full speed (and unemployment down) versus the question of how to address the longer-run trends that have been contributing to increased inequality even when the labor market is healthy.

In the short-run, I think there are relatively straightforward policies that could increase the level of demand in the economy. Interest rates are really quite low – in fact, it’s been common to see “real” (inflation-protected) interest rates that are negative in the past couple of years. So, with the world willing to lend the U.S. money at incredibly low rates, it seems obvious that we should take advantage and invest in infrastructure and other long-run determinants of growth. There doesn’t seem to be much political will to do this, but the fact that Congress is reducing the impact of the sequester is at least a step in the right direction.

In the long run, though, there are some important ongoing trends that have had a significant impact on income inequality. Two primary concerns are an increase in labor-saving technology (automation) and increased access to foreign markets, which leads U.S. firms to produce in countries with lower wages. Economic theory says that these changes are increasing the efficiency of the economy and leading to a higher growth rate. The difficulty, though, is that each of these trends also leads to fairly concentrated losses among the groups most affected, especially middle-class workers without a college degree.

Because of the increased growth, though, it should be possible, in theory, to share the gains in efficiency across the board so that everyone is better off. But, that won’t happen automatically. Instead, what we’ve seen is that these concentrated losses are offset by either small diffuse gains (e.g. lower prices) or concentrated gains among a select few, especially those at the top of income distribution who own most of the nation’s financial capital. I think there are a number of ways of addressing this imbalance, but I’m generally in favor of solutions that allow the economic forces toward better efficiency to continue to operate and then to address the unequal distribution of the gains through taxes or similar policy.

3. You published a paper about “Human Capital and the Lifetime Costs of Impatience.” Tell me about the research, your findings and the implication.

This paper looks at how short-run impatience or difficulty delaying gratification affects how people invest in education. In particular, my co-author and I were interested in dropout behavior, especially among people who drop out very close to finishing a degree. We used data from the NLSY (National Longitudinal Survey of Youth, a nationally representative survey of those aged 14-22 in 1979) and we found that a simple measure of impatience – whether the interviewer coded the respondent as impatient following the interview – had a great deal of predictive power for all sorts of behaviors that are linked to trouble delaying gratification, including smoking, drinking to excess, failing to save, and failing to live up to commitments. We also found that this measure was a strong predictor of dropout behavior, including dropping out of high school and especially dropping out of college after completing at least three years of a four-year degree.

This was an important finding because, contrary to standard economic models of educational investment, we found that people were unable to complete degrees that they realized were worth the cost. The findings imply that providing students incentives to finish school or even changing how much schooling is compulsory could actually make people happier, not just better off financially. The paper also implies that investments in soft skills like the ability to delay gratification can have a large impact on people’s lifetime well-being. We found that, controlling for a host of family background and demographic factors, the impatient respondents earned around 13 percent less over their careers than did similar patient respondents.

4. Some of your recent research deals with labor and mobility. What have you found?

I have a new paper (joint with Brian Kovak from Carnegie Mellon) that looks at how low-skilled immigrants affected the labor market during the Great Recession. We started this project because we knew that Americans, especially those without a college education, were not very geographically mobile in response to economic conditions. In fact, there is talk in Washington of whether it would make sense to pay people who have been unemployed for a long time to move to places where the labor market is stronger.

We found that, unlike the United States-born population, immigrants from Mexico were extremely flexible when it came to choosing where within the United States to live and work. From 2006 to 2010, the Mexican-born population shifted markedly from cities that experienced big job losses to cities with smaller job losses. This movement was clearly good (at least on average) for the mobile immigrants, but we also found that it helped smooth out outcomes for the native-born population. Immigrants’ mobility worked like a form of labor market insurance: Among cities with sizable Mexican-born populations, the immigrants’ mobility reallocated employment probability from places with smaller job losses to places with larger job losses. The result was stronger labor markets in places that would have otherwise been hardest hit by the recession.

5. Where do you see yourself 10 years from now?

Of course I’d like to be recognized as a leader in my fields of research and to have an increasing influence on the types of questions that people find interesting. I’ve also chosen to do work in an area that gets a lot of attention by the media and policymakers, and it would be great to expand my influence there as well. (My new immigration paper has been written up in several media outlets, and I did an interview discussing the results with the local Univision affiliate).

On a personal level, though, I hope that in 10 years I’ll have taken advantage of many of the things that living in Boulder has to offer. Being from the Midwest, I never learned to ski, so I’d like my kids to learn, and it would be great to learn along with them. I also really do enjoy hiking, and I’d like to have checked off several 14ers by 2023. Someday, I want to learn to play the piano – I can play well enough to figure out my part in a piece of choral music, but I’d like to learn to play “for real.”