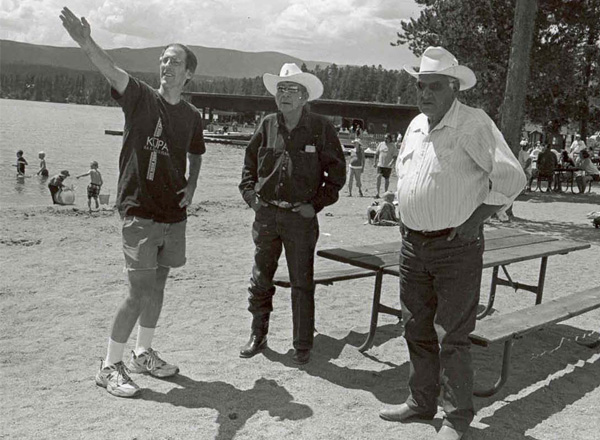 Andrew Cowell jokes that he might be one of the only literature professors around who passed a course in quantum mechanics. As an undergrad at Harvard, he majored in astrophysics, but also took language and literature courses. At the end of his junior year, he switched his major to literature, because, he said, “It came naturally to me whereas astrophysics felt like it was a struggle.”

He studied French – both the language and the literature – at the University of California at Berkley, earning his master’s and doctorate, and was drawn to the Middle Ages, which still is an area of interest for him. Several years after coming to the University of Colorado in 1995, he also became interested in the Arapaho language, which, as with other Native American languages based on oral traditions, was on the cusp of being lost. In the past several years, the professor in the Department of French and Italian at CU-Boulder has worked to help revive the language through research and documentation, as well as offering support to the Arapaho people who are learning the language.

Cowell speaks seven languages: English, French, Hawaiian, Arapaho, Italian, Spanish and Catalan. He enjoys doing research that “feels like it benefits people outside of the campus and academia, and that has some lasting value.” His least favorite part of his job, he says, is having to continually seek funding to do the research. “It’s kind of pathetic how little money there is for language documentation and endangered language work,” he said.

1. How did your research/interests go from Medieval language and literature to Arapaho narratives?

I was very interested in the oral and performative side of medieval literature. (Most early epics were the product of an oral tradition, for example.) So I thought examining a living oral narrative tradition (as exists with Arapaho) would be a good way of getting a better understanding of how oral performance works. I had originally been learning Arapaho on the side, out of curiosity, because it was the native language of Boulder, so to speak. Then I got into the narratives and published an anthology and some articles on the stories, and one thing led to another. The Arapaho language was very under-researched overall (no grammar, no real dictionary, no substantive collections of texts, no descriptions of speech styles and interaction, etc.). I think if you’re oriented toward research, that’s the real key, whether it’s astrophysics or literature or languages. The exact time period or language you end up focusing on is often an accident, or at least an outcome of a long chain of unpredictable circumstances. I’m still equally involved in both medieval epic literature and Arapaho narratives.

2. Why is it important to save the Arapaho language? How has it affected Colorado and the West?

Lots of Native American languages are no longer spoken fluently, and many more will be joining that list over the next few decades, unfortunately, unless current trends change. There are lots of reasons to try to save the languages. The speakers and members of the various tribes almost always want to do this, so it’s very rewarding to help them. Languages are closely tied to identity, and language loss is closely tied to issues of both human rights and social, political and economic inequality. So if you’re interested in social justice and human rights, you should be interested in language loss. From an academic standpoint, we still know very little about most of the world’s languages, so losing them could have a major impact on linguistic theory and our understanding of language, culture and cognition. For a while the Chomsky perspective dominated: All languages are roughly the same, and the differences are very shallow. But more recently, there has been a shift in the field toward recognizing that differences in language and language-driven cognition are more profound than has been realized. And finally, I think Native American languages are a part of the U.S. heritage, not just for enrolled tribal members, but for all of us;  losing them is losing a key part of our heritage.

I wouldn’t want to claim that Arapaho is more important than any other Native American language, but I do think it’s more meaningful for people in Colorado. A number of places in the state derive their name from Arapaho (Kawuneeche Valley in Rocky Mountain National Park, the Neota Wilderness Area, the Never Summer Mountains). Knowing the meaning for those and other Arapaho names for places, animals, plants, birds and so forth can provide a completely different perspective on the landscape and the natural world. Kawuneeche means “coyote river.” The word for a park, as in South Park or North Park, is ce’eiinox, meaning “game bag,” as in game you hunt. The area around Hayden Gorge in Rocky Mountain National Park was called woxse’eihtoo, meaning “Bear’s Paw,” which refers to a sacred motif of Arapaho painting and beadwork, which then refers back to the creation story and the transformative power of creation. Some of the stories I’ve documented are specifically about places in Colorado. Those stories are no longer known by any living Arapaho person, since the language and the stories told in it are being lost, so without the documentation work from several years ago, that part of Colorado’s heritage would be gone.

In the end, though, the language belongs to the Arapaho people, and they’re the ones who benefit from its continuity. For example, the language is automatically calibrated to maintain and reflect respect for relationships in the culture, which are a key part of social and ceremonial interaction. The English language simply doesn’t reflect those social gradations as a requirement of its grammar. As another example, there are special prefixes used on verbs to indicate whether a story is from the present time or mythic times.

3. In what ways have you helped save the language?

There had been some documentation of Arapaho before I started working, but not a lot. Most of what I’ve done is record oral speech, then transcribe it into written Arapaho and translate it into English. There are probably only 250 or fewer people who still speak the language, all over the age of 60. I learned it from those people, slowly learning words and grammatical structures.

Really, only the Arapaho people themselves can “save” the language by deciding to learn it and speak it. I have mostly documented the language and that serves as a resource for those trying to continue using it or to relearn it, or as insurance or a back-up in case there are no more fluent speakers. I have also taught courses on language teaching methodology to the speakers to try to make them better teachers. And I have taught some courses on the grammar of the language to younger learners to try to give them head starts and shortcuts as they acquire it. I try to show up whenever I’m asked to assure school administrators that the language can be learned, and should be supported, or to help those in the tribe pushing the language to get support from others in the tribe. And I’ve created a lot of curriculum and resources for teachers, including online learning materials that have audio files included. Several of my students have also contributed research on educational issues and methodologies. There’s another professor from University of Montana, Stephen Greymorning, who has been even more involved in the educational areas, especially helping start immersion schools where Arapaho is the language of instruction. So it’s not just me, but it would be great if there was even more help.

4.  What research projects are you currently working on?

I just finished videotaping several dozen hours of conversation. My students and I are looking at interaction styles, including things like gesture and eye contact. Many people don’t realize the differences between languages are often as much in interaction styles as in the grammar and vocabulary. We’re discovering whole new realms of the language from the videotapes, like collaborative narratives, teasing and joking with each other, and the fact that some of the gestures don’t just complement the spoken word, but actually indicate things that the speech itself doesn’t specify. I’m also working on topics in medieval culture, plus directing work at CU in endangered Meso-American languages, and working on the Gros Ventre language in Montana.

The work with the conversation is rewarding because it captures the way people actually speak and interact on an everyday basis. Narratives are very important, but we spend 98 percent of our time just talking back and forth, not telling hourlong formal narratives. Unfortunately there’s very little documentation of actual, live conversation and interaction for Native American languages, so this is kind of a first, not just for Arapaho, but almost all Native American languages. It also shows young learners how the older fluent speakers use the language – all the conversations have transcriptions and translations, which are time-aligned to the video. I’m also working on a collection of short, informal, modern narratives about reservation days, as opposed to the “old-time” myths and legends. This is another way of looking at the here and now of everyday life.

5. Outside of work, what activities do you enjoy?

I do a lot of hiking and exploration of the natural world (which has led to research on ethnobotany and ethnozoology, it turns out), plus camping, skiing and snowshoeing. I know all the plants, birds, animals and so forth, and I enjoy being able to apply my knowledge of Arapaho – knowing the name for what I see in Arapaho, and knowing how the plants are used in traditional medicines, the stories about the plants and animals. So everything is kind of integrated. My wife is Hawaiian and we speak the language at home along with English, so we do a lot of Hawaiian-related things with the local Hawaiian community, such as dancing, singing, playing ukulele, and eating Hawaiian food when we can get it. I’m also a big football fan.

I’m also active in my church. If you spend lots of time with indigenous cultures – whether Arapaho or Hawaiian – you almost inevitably confront the spiritual component of language, culture and identity, and that’s something many indigenous people feel is missing from “mainstream” American culture – “reverence,” “respect,” “humility.” There are lots of words one could use. To work for a long time with smaller, endangered indigenous cultures, you need to stay humble and critical of yourself. I’m sure different people have different approaches to doing that, but I feel like staying grounded in my own traditions in this regard is part of doing a lot of the work that I do.

Tagged with:
Department of French and Italian