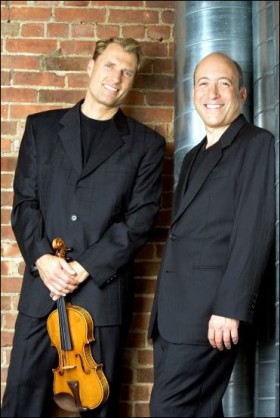 Andrew Cooperstock's music career has made him somewhat of a globetrotter. As a piano soloist and chamber musician, he's spent time on six continents and has performed in nearly every state in the U.S. He has won numerous awards and has been described as a "technically impeccable and musically profound" pianist.

He and his musical partner, violinist William Terwilliger, also have won awards appearing as Opus Two. The duo has appeared throughout North and South America, Europe, Africa, and Australia, and it made its Asian debut in 2006 with performances across China, Korea, Japan, and the Russian Far East.

Cooperstock, a professor of piano, has been at the University of Colorado Boulder's College of Music for 12 years. He is a graduate of the Julliard School and the Cincinnati and Peabody conservatories.

Recently, he and Terwilliger spent a week in Africa on a tour coordinated by U.S. Department of State.

1. How long has music been a part of your life?

It's always been a part of my life. I remember singing songs with my mom and having the desire to play the piano before we owned an instrument. I played toy pianos and all my friends' pianos. I was thrilled when we finally got one and I could start taking lessons formally at age 8. I've concentrated on piano the whole time.

2. How did the tour of Ghana come about?

The impetus came from one of my colleagues, Kwasi Ampene, who is one of our associate musicologists and is from Ghana. Over the years, he's suggested that I go to Ghana. I sort of shrugged it off, but then I thought this might be the time. He put me in contact with the University of Ghana, which has one of the main music programs in the country. And then the State Department got involved. In 1993, Opus Two won a competition sponsored by the U.S. Information Agency. They sent us to South America for a two-month tour and ever since we've stayed in touch. We contacted the State Department to see if they were interested, and they took over the tour and created a great schedule for us. Even with a tight budget, the State Department is interested in these types of cultural exchanges and building bridges.
We were residents at the University of Ghana, teaching master classes in violin and piano and performing for the students. They performed, danced and drummed for us. Then we spent time with the National Symphony Orchestra of Ghana, which is state sponsored, performing in Accra. We also performed a recital at the U.S. ambassador's residence for dignitaries.

It was an amazing experience. I had no expectations at all of Africa, but I was pleasantly surprised to see the modern, bustling city of Ghana. The people were very welcoming, very cultural minded. It was a pleasure to learn about the music scene there and to work with everybody.

I consider the tour almost life-changing. The roots of our American popular music really are African and so I thought about our music in a different way. America is, of course, a melting pot, but the roots of even our classical music can't help but be influenced by jazz. Those are the same rhythms we heard when we were in Africa. American popular music influences a lot of the world now, and I think it's influencing African music again.

We played music from our new CD,"Leonard Bernstein: Violin Sonata; Piano Trio; New Transcriptions." And we played some Paul Schoenfield and "Bess, You Is My Woman Now" from "Porgy and Bess." The State Department is particularly interested in us playing American music. We played some standards, too: Beethoven and Brahms.

Then we thought it would be nice to play a couple of African pieces. Kwasi suggested a couple by a composer named J. H. Kwabena Nketia. He is about 90 years old and a wonderful classical African composer whose inspiration is African folk music. He's considered the father of ethnomusicology. He came to our concert and we played for him.

3. How long has Opus Two been together?

Almost 20 years. We have a half-dozen CDs. The Bernstein just came out in November. We recently did a performance in Greenwich Village at this cool spot called Le Poisson Rouge, a nightclub. Leonard Bernstein's son, Alex, came to hear us.

It takes a long time to finish a CD project. Usually you want to live with the music before you record it, so it might be a year or two of performing the pieces, then two or three days to lay it down. You try to get it perfect. Every project I've taken on, it's been like a child, from the conception of the project to seeing it through. I'm very proud of each and every one of the CDs.

4. How did the performance experiences in New York and Ghana differ?

The satisfaction was different with each, but they were both on a high level. In New York you have some of the most sophisticated audiences in the world. There are critics there and record producers, and friends in the business, and to have Bernstein's son there was very exciting.

The audiences in Ghana were a treat, too. They were very attentive. People who attended the recital said they were moved by the music and began to cry. I think some of the music we played was inspiring to them.

We play concerts all the time; we don't have to go clear across the world to do it. We do it to get to know the culture and the people. Knowledge makes performing very special for us.

5. Is there one aspect of your career you enjoy most?

I'm thrilled to be active in the music profession and have the opportunity to have new projects all the time, to be able to record and to travel, to learn new music, and to get to work with other people. I love the way my career has turned out: performing and the teaching. I was just in Iowa judging an international competition and I'll be judging in Hong Kong in July and Baltimore in October. I love hearing young people coming up – people trying to break in with their career. Mentoring the next generation is great, too.

Send your thoughts and suggestions for the Newsletter.
END_OF_DOCUMENT_TOKEN_TO_BE_REPLACED