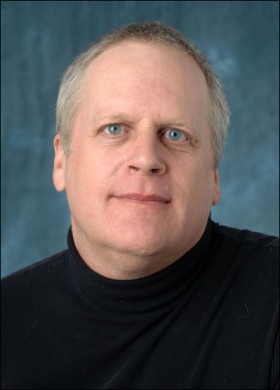 The University of Colorado was founded in 1876 on the high and dry plains at a location that might have looked like the middle of nowhere. But with human forethought and Mother Nature's capriciousness – with good and not-so-good results – the campus has become a beautiful sanctuary for man and animals. For the past 25 years, Alan Nelson has contributed to the evolution of those acres of green that define the campus as one of the most beautiful in the country.

As a young landscaper, Nelson responded to a job listing in the Sunday Daily Camera and since then has worked for the university. For many years, he served as the outdoor services manager, and a few years ago became the senior grounds specialist. In his new capacity, he helps with the tree program, works with hardscapes and snow removal, and represents facilities operations on the special event approval process.

A few of his duties occur only a few times a year. He's the procession coordinator during commencement, and you might see him attempting to shepherd 4,000 graduates from the Norlin Quad to Folsom Field for the ceremonies. And every spring and fall, the self-confessed "softy for trees" conducts tree walks, sharing with participants some of his extensive knowledge about the campus history and tree culture.

This spring's tree walks are May 17 and 18. You might hear Nelson tell about the old cottonwood tree south of Old Main, which he calls the most historically significant tree on campus. If you're lucky, he might take you to the west end of the Norlin Quadrangle – one of his favorite spots – marked by a few benches and some beautiful, established trees. And he'll tell you about the area around the Mary Rippon Theatre, which by night takes on a magical air, especially for him. 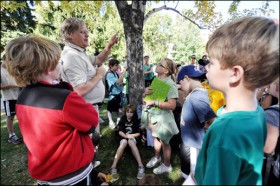 I usually do a spring and fall walk in conjunction with the University of Colorado Museum of Natural History and the Heritage Center. I try to explain what's unique and different from one tree to another and I throw in some historical pieces about things I know about campus and its development. The university is a phenomenal resource for the public; tree walks are a great way to share the campus with the public.

I'm about five years into a fall walk with fourth-grade students from Flatiron Elementary School. They have a science unit every fall that is related to the biology of trees and finish their studies with the tree walk. It's insanely cool because the kids are an amazingly adept audience when it comes to identification. If I ask them to tell me what kind of tree it is, they are usually right or very close.

Maps were created in the past 10 or 15 years that we use as a supplement, but I never follow the map exactly because it takes all the fun out of it. We spend a lot of time in the Norlin Quad area because there are so many interesting things and some of the most awesome trees there.

At Old Main, around 1876 or 1878, cottonwoods were planted. That's the oldest part of campus. Cottonwoods are not normally a long-lived group, but one stately tree has been blessed. Someone doing research found a copy of an invoice that shows the purchase of about 40 cottonwood seedlings. I'm 99 percent certain that large cottonwood was purchased as part of that group. When I started working at CU in 1986, there were 12 or 15 trees of that same group. Now there are probably eight left. For the natural life of a cottonwood to be anything close to 100 years is pretty crazy because they're fragile in extreme weather conditions, so for that tree to be in the shape it's in is pretty phenomenal. Unfortunately, it also means that it's closer to the end of its life than the beginning.

There are about 5,000 trees on campus. There's not a lot of good solid documentation on the trees, although the Heritage Center has some of the most amazing photography of campus showing its development. It's striking to see Old Main in 1876 all by itself with nothing around it except cattle; now the plant palate all around it is pretty mind-blowing.

Campus was founded on a high, dry prairie where there was little vegetation that was above waist-high. So everything here either has been planted or tree seeds blowing onto campus germinated and never were removed.

There's a Weeping Swamp White Oak that is on my Top Ten most favorite list. And there's a really neat Redbud in the northeast corner of the Mary Rippon Theatre. We have a number of Gingko trees, which is pretty unusual. In the process of doing the tree walk with the fourth-graders, I was trying to describe a tree's reproductive life. Most trees have female and male parts, but need another tree next door to make things happen. There are some trees – the gingko is in this group – where there are male trees and female trees. The female tree isn't readily available because it produces fruit and as that fruit decays, I'm told it smells terrible. But Gingkoes are a cool tree. I really like the way it looks: nice fall color and a neat leaf.

When I explained about boy Gingkoes and girl Gingkoes, the kids' interest level was through the roof. When they got back to school, the teacher asked everyone to write me a thank-you card and more than half mentioned girl trees and boy trees.

2. What are some of the big challenges/successes of your position?

Having to tell people "no" on special events is hard, especially after they've made plans. I take pride in making contributions on a beautiful campus and I take a lot of pride in the efforts of my co-workers.

One of the emotionally tough things I've been part of has been a number of tree donations made in memory of special people who have passed away. I remember an especially difficult tree planting in honor of Susannah Chase (murdered in 1997) and the lovely thank-you note her mother sent me.

One big challenge is dealing with the fact we have a growing campus. Trees don't always win in conflicts with excavating equipment. We make pretty concerted efforts to save trees, but that doesn't always happen.

When I started in 1986, we had a higher percentage of hazard trees – certain types of trees prone to have more issues or problems given the Boulder environment. Those tend to fail and need more attention or need to be removed more often. For example, silver maples were very popular to use on campus in the early 1900s. They were fairly tolerant of tough conditions, grew quickly, had some elements of fall color and would grow in Boulder. But the silver maple is something we would not plant on campus now. The wood is not structurally as sound as other maples. It has a higher propensity for storm damage. Branches or sections break off when there is a heavy wind load or a heavy snow load. By the time they are 80 or 100 years old, they're pretty beat up, and have decay in the heartwood inside the living tissue of the bark. You can only prune to correct so much. Some that we removed in the early '90s on Broadway had only 3 or 4 inches of sound wood around the outer edge and a 2- to 3-foot cavity in the center. That's a hazard tree. The worst of the criminal offenders are gone now.

3. How do you feel about the campus as a public and wildlife sanctuary?

I like the idea of campus being a public sanctuary. It's a great resource for people in town. I'm a pro-wildlife guy, except the squirrels make me crazy. I think we need more foxes and fewer squirrels and raccoons. Raccoons are rather nasty creatures. But I'm always happy to see a deer on campus, too.

4. How has the landscape management changed over the years?

There's constant improvement. There has to be. There's a lot more demand with so many people on campus. There were 15,000 students when I started and now we're at nearly 30,000. They can be hard on a physical space.

The university has pretty significant water rights and that has made a huge difference to the landscaping. We have tons of nonpotable ditch water. It's unsafe for drinking but perfect for plant material. Everything on campus was able to get supplemental irrigation, and for a tree trying to live in Colorado outside of its native conditions, the tree needs more moisture than it gets. So the fact that campus has had a water system from the beginning is significant. There are several ditches on campus. In the early years, they would open up the channels and stack up sandbags along the way to achieve flooding throughout the quad. As ineffective and as goofy as it sounds, it's actually part of the reason that some of those larger trees are there. The diversity of plant material on campus adds a tremendous value to the way the campus looks and feels.

Now technology has improved. While we still have ditches on campus, the water is stored in ponds that are aesthetically pleasing – or at least one of them is. Then, in the evenings, the water is pumped out through a state-of-the art computer system. The computer takes weather data all day and determines what the evaporation-transpiration rate is for all the different zones on campus. The computer tells each zone how long to run water for perfect irrigation.

The campus recently was recognized by the Arbor Day Foundation Day as a "Tree Campus USA." There are five requirements including tree management and a student-involved learning project. This year, they helped with the removal of Russian olive trees, which are an invasive species. We're the first front-range campus to achieve the designation. 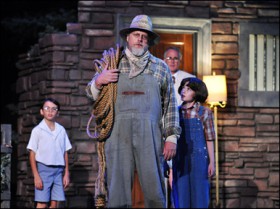 Photo: Glenn Asakawa/University of Colorado
At the Colorado Shakespeare Festival, Alan Nelson has appeared in such productions as "To Kill a Mockingbird."

Photo: Glenn Asakawa/University of ColoradoAt the Colorado Shakespeare Festival, Alan Nelson has appeared in such productions as "To Kill a Mockingbird."

5. You've spoken fondly of the Mary Rippon Theatre. Why is that?I've had the great pleasure of working with the Colorado Shakespeare Festival. This will be my ninth season. Years ago, Dick Devin was their producing artistic director. I knew Dick because some of the landscape business had affected the festival. I had been attending for a while, so on a whim, I said, "Hey, Dick. I'd like to be on stage sometime, maybe as a dead body or something." We talked and I did a small audition piece. Since I come to them at no expense, they have found pieces for me pretty consistently. I was honored to play Walter Cunningham in "To Kill a Mockingbird" a couple of years ago. The woman who directed the show, Jane Page, is my favorite director I've worked with at the festival. She actually had me in mind for that part when she was talking about staging it on campus. To be personally thought of for a part that is the nicest one I've had yet with them was really flattering and cool. It was an incredible show to boot – a strong performance – and we sold out every night.

Send your thoughts and suggestions for the Newsletter.
END_OF_DOCUMENT_TOKEN_TO_BE_REPLACED