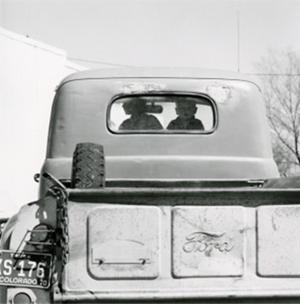 “Boys in a Pickup” by Robert Adams.

Free food, art, music and poetry will be highlighted during a First Friday exhibit scheduled for 5:15 p.m. to 9 p.m. June 7 at UCCS GOCA 121 and IDEA at Colorado College.

At 5:30 p.m., Curator Jessica Hunter-Larsen will give a brief introduction to the exhibition followed by a poetry reading by Jane Hilberry, a Colorado College English professor. A performance in the gallery by musicians featured in the Colorado College Summer Music Festival will conclude the program.

For more than 40 years, Robert Adams’ photographs have celebrated the beauty of the American West. He often focuses his attention on overlooked subjects and vistas such as the quiet streets of small towns, the wide-open prairies of the plains, or the junctures of wilderness and urban development. Inherent in his images is the recognition of the relentless absorption and transformation of nature by human development. The exhibition will run through June 15. 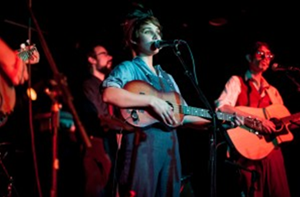 “Haunted Windchimes at the HiDive (Halloween)” by Bill Starr.

At 7 p.m., UCCS GOCA 121 will host photographer Bill Starr for an artist talk followed by a free concert by Colorado Springs-based musician Alex Koshak. Koshak will perform as part of GOCA and COPPeR’s joint “Free First Fridays” concert series with his newest project Charioteer from 7:30 p.m. to 9 p.m. Refreshments will be donated by Brewers Republic, Bristol Brewing, and Nosh Restaurant. GOCA121 is located at 121 S. Tejon Street (Plaza of the Rockies), Suite 100.

DOCUMENTATION features the work of three Colorado-based photographers, Matt Chmielarczyk, Bill Starr and Andrea Wallace, and their compelling personal narratives. For more than 22 years, Starr’s photography has for captured movement in dance, theater, performance art and Colorado’s indie/electronic/folk music scene. Starr’s physical and social challenges from living with acute rheumatoid arthritis inform how he observes and translates movement. Starr’s home has served as a hub and informal artist residence for dancers, musicians, and artists of all backgrounds, giving him the opportunity to document many “moments of intensity” through his camera lens. The exhibit is on display through June 29.

GOCA is a contemporary arts organization with two galleries. A campus gallery opened in 1982 and is located in Centennial Hall. GOCA 121 opened in 2010 in the Plaza of the Rockies building at 121 S. Tejon in downtown Colorado Springs.