CU President Bruce Benson made his last appearance at a Faculty Council meeting on May 22. He'll retire from CU on July 1. 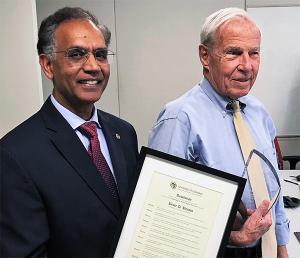 At the council’s May 22 meeting at 1800 Grant St., Benson was praised as “a staunch advocate for faculty (who) has championed their efforts and accomplishments in his role as the face of the university.”

Former Council Chair Ravinder Singh presented Benson with a gift from the group and read a resolution listing several high points of the president’s 11-year tenure, including: 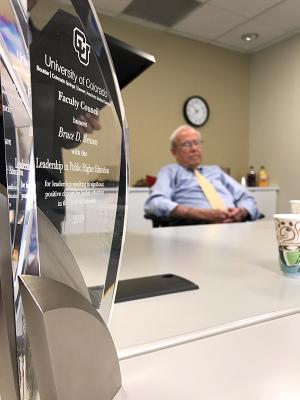 "The faculty is the heart of the university," Benson told the council.

Benson thanked the council for the honor and recalled his approach to CU’s educators and researchers when he took on the job in March 2008:

“We’ve got a great faculty, so let’s not mess with it. Let’s keep them strong,” Benson said. “The faculty is the heart of the university. People need to understand that. We wouldn’t have anything without it.”

Benson, who is set to retire from CU on July 1, said he has advised Mark Kennedy, incoming president, to rely on his leadership team of vice presidents and chancellors upon his arrival. Benson will work with Kennedy in the weeks ahead.

“I really stressed to him to hold onto this staff. And I told him, ‘I’m here to help you transition in and make sure you’re successful,’” Benson said. “I just think everybody ought to get behind him.”

Benson said he’ll remain busy once he departs CU, though he wasn’t ready to reveal specifics.

“Marcy and I don’t plan this stuff. I’m lucky to have a wife who’s so involved and so smart,” he said. “We’re going to see what works out after we’re retired from the university. We’ll figure out what to do next.”