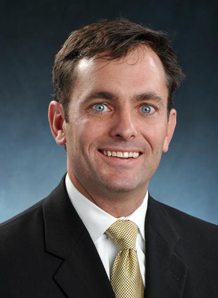 Lengthy discussions on program prioritization and the Social Climate Survey dominated the April 3 meeting of Faculty Council at 1800 Grant St., where Regent Kyle Hybl was invited to speak.

Council members took the opportunity to express concerns over the amount of additional work for faculty and staff generated by the program prioritization process, which was initiated by the Board of Regents and began last fall. They also were critical of the Social Climate Survey, the composition of which might compromise honest responses, they said. (For more on the survey and its recent suspension, see story here.)

Joanne Addison, Denver Faculty Assembly Chair, thanked Hybl and the board for not imposing a system or method for conducting the program prioritization at each campus, and commended the board for stressing to administration that faculty must be strongly involved in the process.

“The downside to that is the amount of work that faculty are doing,” Addison said. “The burden on faculty has been quite a strain. … The time is coming out of other things faculty members should be doing. It comes out of our research, (which) is one of the main things we have to do to maintain our status in our fields and get our bit of (salary) raise that we hope to get.”

Hybl said he would communicate to the rest of the board that the council suggested regents could make greater recognition of the effort going into such an undertaking, and that ideally faculty working on a prioritization committee could be provided a stipend or some other form of compensation for the time and effort.

“Whether it’s this or accreditation, there’s a ton of work that goes on at the institution, and we need to better harness the information (gathered),” Hybl said, noting that he expects the current prioritization efforts to help establish procedures that can be replicated for future comparisons.

Pam Laird of CU Denver and Peggy Jobe of CU-Boulder said that campuses already are in the habit of ongoing analysis of programs, and that cuts are made when programs don’t seem justified. Laird criticized a book by Robert C. Dickeson, “Prioritizing Academic Programs and Services,” as making an unfair assumption that “unnecessary fat” at universities is a given. (Dickeson spoke as a consultant during the Board of Regents’ retreat last summer.)

“I think we can say as an institution, ‘We’re very mindful of everything and we (already) get rid of things that are not necessary,’” Hybl said. “(But) it’s easier to build than to modify or reduce. I acknowledge the work that goes into determining what courses go forward. I also believe, when we’re looking at everything all at the same time that it will yield interesting results.”

The regents’ Social Climate Survey, which was underway at the time of last week’s meeting, also sparked discussion at the meeting.

Addison said that demographic questions and other potential identifiers could potentially be used to pinpoint and attach survey responses to individuals. Should that information ever be released, she said, “You will create an incredibly difficult environment for them. I think the validity of the survey is seriously in question because of that.”

Scarlet Bowen, chair of the council’s GLBTI Committee, said via phone that a climate survey can be very helpful – especially in gathering information from people who wouldn’t necessarily make a formal report if and when an instance of discrimination occurs. But she said the regents’ survey fell short by not including opportunities for open-ended responses to any of the questions.

Several members of the council said that these and other issues could have been identified prior to the survey’s release had they and others been asked to test the survey on a pilot basis.

Hybl left the meeting to speak with Patrick O’Rourke, University Counsel and Secretary to the Board of Regents, then returned to stress to the council that results of the survey “won’t be so thinly sliced that individuals can be identified.” He also said the survey responses would not be released in their entirety.

Hybl eventually asked O’Rourke to join the meeting; O’Rourke said that because the board wanted to be able to take corrective action should the survey indicate any areas of concern, some identifying information had to be collected. For instance, he said, if the vendor conducting the survey determined concerns were concentrated in a particular department, the university would need to be able to track back and determine where efforts need to be made.

“The fear is that people most likely to have experienced discrimination will feel least safe in responding,” Bollard said.

O’Rourke and Hybl said they appreciated the council’s concerns, and O’Rourke said he would begin working with regents on how best to remedy the process.

In other business at last week’s meeting, Vice Chair Laura Borgelt encouraged attendance at the Faculty Council/Faculty Senate meeting on April 24, as a quorum is required in order to make official changes that have been proposed for the group’s bylaws.

Tagged with:
Board of Regents, Faculty Council, Hybl