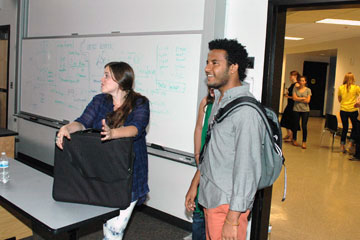 Robera Oljira gets instruction on a film shoot of the CU Denver television ad in which he is the lead actor.

Robera Oljira crammed for his biology final on a hot day in late July. He walked with purpose between the Tivoli Student Union and North Classroom to continue studying.

Suddenly, he heard voices on the plaza and saw two women running toward him. "They called me and I looked back," he recalls. "I had no idea they were looking for me."

Oljira, a 20-year-old CU Denver biology student from Ethiopia, knew the United States was the land of opportunity, but he had no idea it would come racing after him. The women, from the advertising agency Karsh/Hagan, explained that a casting call was taking place for students, faculty and staff interested in appearing in CU Denver's first-ever TV commercials. They asked Oljira if he'd like to try out. He obliged.

"I didn't think they'd call me back, but two weeks later, they did," the freshman said. Since then, Oljira, who arrived in Colorado just eight months ago, has experienced a taste of Hollywood: He has sat for makeup and fashion sessions, been filmed all over the CU Denver campus and done more retakes than he can count.

He stars in the TV spot that shows an undergraduate student going about his day at CU Denver. His family back home in Ethiopia can't believe it. "They said, 'Are you kidding?'" when he shared the news. "I said, 'I'm serious.'"

The term "serious-minded student" sums up Oljira. He made the Dean's List in his first semester at CU Denver. In 10th grade, he was the only high school student in his hometown of Nekemte to score straight A’s on the national exam. He wants to become a physician, possibly a surgeon, as well as a researcher who advances medical care and possibly discovers treatments for illnesses such as diabetes and hypertension -- afflictions common among Ethiopians.

"Education is one of the best ways to maximize your potential and bring it out," said Oljira, who was raised in a loving family that values education. "Life without a dream and goal is like a life without sense. To have a meaningful life you have to have a goal."

His attitude perfectly fits with the tagline of the university's comprehensive advertising campaign: "Learn with Purpose."

"We were looking for a student who really managed to combine all the good attributes of the university -- the diversity, the downtown location, and also just a real inherent sort of style," said Matt Ingwalson, Karsh/Hagan creative director. "When we saw Robera walking around we said that is a guy who we think would be a really good representative for CU Denver."

Oljira, whose older brother came to Denver five years ago, has poured himself into his studies as well as extracurriculars. He has joined the CU Denver student organization Future Doctors of Denver, is looking for a soccer team to join and has become active in the local Ethiopian community. He has been enjoying the university's diversity, meeting students from across the globe.

"I think the USA is the land of opportunity. There are a lot of doors here -- social, economic, technological," he said. "Here, you have many more resources available to be a better person. There are really good professors here. I like the way they teach."

He realizes he's lucky to be representing CU Denver in the high-profile commercials. "It's such a great opportunity to represent the school I love," Oljira said. "I'm so excited. I can't wait to see (the TV ad)."

Oljira began medical school two years ago at a university in Addis Ababa, Ethiopia. He sought greater educational opportunities in the United States, and was elated when he won a diversity immigrant visa through a lottery.

"Never give up," he said. "It's never too late to achieve what you want."

Send your thoughts and suggestions for the Newsletter.
END_OF_DOCUMENT_TOKEN_TO_BE_REPLACED