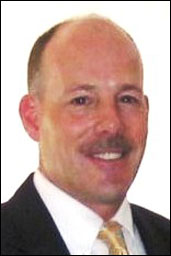 Johnson, currently interim director of the Center for Homeland Security at UCCS, is one of nine nationally recognized legal experts selected to introduce the new manuscript, "Legal Issues in the Struggle Against Terror," edited by University of Virginia School of Law professors John Norton Moore and Robert F. Turner.

He will speak at the National Press Club in Washington, D.C., on May 6.

Published by Carolina Academic Press, the book is designed to provide legal scholars, policymakers and the general public with a serious look at critical legal issues in this unusual armed conflict. The manuscript contains 19 chapters that address various aspects of the ongoing struggle against terror including threats of nuclear and biological terrorism, cyber terrorism, protecting privacy while sharing information with allies and within the U.S. government, and the use of the state secrets privilege to terminate litigation.

"I'm humbled to be a fellow author with some of the most respected national security legal experts in the United States," Johnson said.

"I often heard the phrase 'everything has changed' after the 9/11 attacks," Johnson said. "Yet our Constitution, and most domestic and international law concerning the conduct of war, remain intact and unchanged. This book tackles how to meet our new and unconventional enemies within the bounds of that conventional law."

This volume is recommended for classroom use and for general reading by anyone interested in understanding the most important legal controversies in the struggle against terror. "In a sense, this work represents the culmination of a lifetime of striving to protect both our national security and the priceless individual liberties we enjoy," Johnson said.

The Center for Homeland Security is one of four centers within the National Institute of Science, Space and Security Centers at UCCS.

Send your thoughts and suggestions for the Newsletter.
END_OF_DOCUMENT_TOKEN_TO_BE_REPLACED