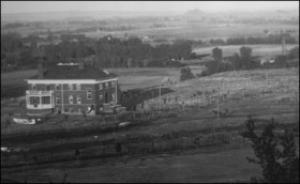 The hospital as viewed from Main. Valmont Butte is visible in the background.

The University of Colorado at Boulder has an unofficial caretaker of rare historical photographs: Albert A. Bartlett, emeritus professor of physics at CU-Boulder.

"It has been a few years since I gave this presentation," said Bartlett, who credits late CU psychology professor John Bernard Schoolland for his long-held interest in local and regional history. "One of the first semesters I was here, I heard his discussion of Colorado's narrow-gauge railroads. I was fascinated and started following him around." 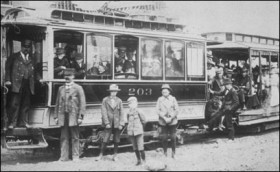 Schoolland wrote "Boulder Then & Now" and other books on the history of Boulder.

Bartlett said the slide show photos, assembled from several sources, provide scenes from the university's early history up through about 1940. "Some photos are taken from a copy of the 1908 yearbook, the 'Coloradan' which I purchased at a sale in Norlin Library in the 1950s," he said.

"Many years ago, the late Otto Birk, professor of English in the College of Engineering, had a slide talk on the early history of the university. After his death, his widow very kindly gave me the slides that Otto used in his talk. 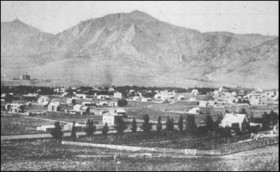 In this photo taken about 1884, Old Main sits alone above the town of Boulder. It was finished in 1876.

"In the early 1970s, I was chatting with George Kupfner of the University Photo Services in his office in the basement of Macky Auditorium. George brought out a couple of cardboard boxes of old glass-plate negatives of the early history of the university, telling me that someone had brought them into his shop some time earlier and that he had never really looked at the negatives. They were clearly a treasure trove."

Most of the photos were taken by J. Raymond Brackett, who came to the university in 1885 as the professor of English literature and Greek, Bartlett said. He was the first dean of what is now the College of Arts and Sciences. Later, he was the first dean of the Graduate School. Brackett did photography as a hobby.

"I applied to the University's Centennial Commission (1976) for a grant to pay the costs of having George make five prints of each of these negatives, which I assembled into five sets of notebooks," Bartlett said. "For each photo, I wrote out a description with an account of all of the interesting things I could see in studying each photo with a low-power magnifier. These descriptions were added to the notebooks." 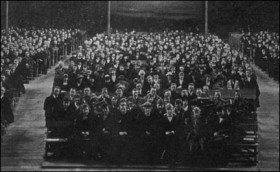 A student assembly in the as-yet finished Macky Auditorium. The building took years to complete due to lawsuits by the Macky family and the state.

In the 1990s, Bartlett wrote a long manuscript on George Norlin, Charles Klauder and the early history of the architecture that now characterizes the Boulder campus. It has not been published, he said, but it is available.

"A few years ago, my colleague Jack Kraushaar and I prepared a detailed history of the department of physics," he said. "In the preparation of this history, I came across more old photos of the university. The pictures in this presentation draw from all of these sources. I am indebted to all who have helped me in the collection and understanding of these photos. In particular, I want to thank David Hays of the Archives in Norlin Library and Mrs. Otto Birk."

Bartlett is currently working with the CU Archives on spreadsheets that chronologically list events mostly related to CU and the department of physics.