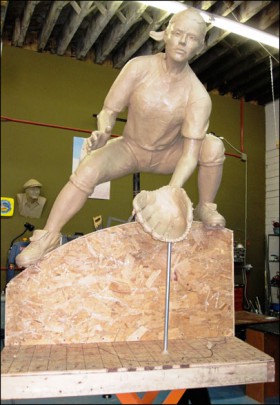 University of Colorado Colorado Springs supporter Glenn Williams aims to level the playing field with several gifts he has made toward UCCS women's athletics the past five years – including an endowed scholarship for women athletes.

And now, with a gift of a 12-foot-high sculpture that will grace the Four Diamonds Complex on North Nevada Avenue, Williams' legacy will be evident not only to his scholarship recipients but to thousands who use the athletic fields each year.

Williams commissioned Loveland sculptor Denny Haskew and the National Sculptors' Guild to produce a $155,000 bronze sculpture depicting a woman shortstop modeled on a former UCCS player. The CU Foundation facilitated the commission of the sculpture, which will be installed and unveiled at a ceremony at Four Diamonds this spring.

Haskew's work, heavily influenced by his experience as a Native American, is showcased in many high-profile municipal settings as well as in major collections and museums including the Smithsonian Institution in Washington, D.C.

"My inspiration for this sculpture has been to create a museum-quality monument that reflects the intense focus of the student-athlete and has the appeal and respect of the UCCS community," Haskew said.

Williams said he had the idea to commission the sculpture at a UCCS event. 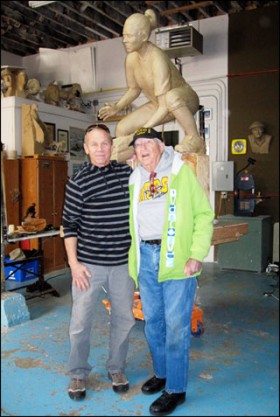 Sculptor Denny Haskew and donor Glenn Williams in Haskew's studio, where the sculpture that Williams commissioned for UCCS is being completed.

"Chancellor Pam Shockley-Zalabak had a dinner one night on campus – I was at the dinner – and for some reason, I started thinking about something I might do for softball," Williams says. "It crossed my mind: Why not put up a sculpture of a woman playing softball at Four Diamonds? I mentioned this to the chancellor, and she said, 'Go for it.'"

Williams has similarly donated athletic sculpture to schools such as Eastern Illinois University, where he spent his career as a high-ranking academic administrator.

The Glenn D. and Joan R. Williams Endowment for Women's Athletics, established in 2007, already has supported UCCS women student/athletes in softball, basketball and volleyball; he has endowed another fund to support the softball coach position.

"Glenn Williams is a special friend of the university and our women's athletic program," Shockley-Zalabak said. "We are deeply appreciative of his continued support."

Send your thoughts and suggestions for the Newsletter.
END_OF_DOCUMENT_TOKEN_TO_BE_REPLACED