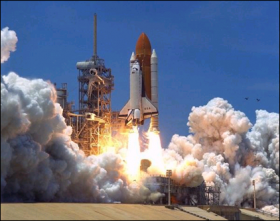 One of the experiments is designed to help scientists better understand changes in the virulence of bacteria in the low gravity of space as a way to help researchers prevent or control infectious diseases. The second is a cell cultivation experiment in a tropical plant known to produce nuts that could be used to make biofuels, said Louis Stodieck, director of BioServe Space Technologies in CU-Boulder's aerospace engineering sciences department.

Both experiments will be carried aboard Discovery in sets of specially designed fluid-processing cylinders built by BioServe known as GAPs, said Stodieck, The bacteria experiment will target how microgravity affects the growth of bacteria, in this case Methicillin-Resistant Staphylococcus Aureus, also known as MRSA.

The GAPs will ride inside BioServe's Commercial Generic Bioprocessing Apparatus, an automated, suitcase-sized device developed at CU-Boulder that has been launched on more than 20 NASA space shuttle missions, with two of the CGBA devices now on the International Space Station. BioServe is providing the hardware, integration and operations support for all Discovery GAP experiments.

Astronauts will control the individual GAP experiments using hand cranks to trigger and then later terminate cell growth via fluid mixing, Stodieck said. The samples will remain on the space station until the next shuttle mission slated to launch at the end of the month, at which time they will be returned to Earth for further study.

The bacterial experiment is sponsored by Astrogenetix Inc. headquartered in Austin, Texas, and designed by researchers at the Durham VA Medical Center in North Carolina. MRSA is a growing problem in hospitals and health clinics because of its ability to resist antibiotics in the penicillin class of drugs.

"It can cause a variety of infections, some potentially fatal," Stodieck said. "Because astronauts show decreases in their immune systems during spaceflight, we would like to know more about how bacteria behave in space, including their apparent increase in virulence and resistance to antibiotics. The findings may have applications not only for keeping space crew members safe by helping scientists better understand gene and protein changes in pathogens, but also could potentially help to prevent and control infectious diseases on Earth."

A second experiment, designed by the University of Florida, will use BioServe hardware to study cell cultivation in a tropical plant known as Jatropha that produces energy-rich nuts, a popular new renewable crop for biofuels.  The researchers will be looking for genes that help or hinder growth in this tropical plant species to see if it could be commercially grown in "warm-temperate" areas like the southern United States.

The Jatropha experiment is sponsored in part by Vecenergy, the energy division of Vecellio Group Inc. headquartered in West Palm Beach, Fla.

"We would be unable to carry out all of our research without the help of CU-Boulder students," Stodieck said.  "Both undergraduate and graduate students play an important role in designing, building and testing spaceflight payloads, activities that can give them a significant advantage when they move on to careers in the aerospace industry."

Michael Murry, a junior from Centennial, Colo., who is part of the BioServe team, said he never expected a chance as an undergraduate to conduct hands-on research at CU-Boulder with science payloads being launched into space.

"When I heard about this opportunity, I jumped on it," said the junior aerospace engineering science major who attended Grandview High School in Aurora. "By combining what I'm learning in the classroom with my experience at BioServe, I am developing a solid set of skills for a career in the aerospace industry."

While the Endeavour launch slated for 2011 may be NASA's last space shuttle launch, there is a chance NASA might add an additional shuttle flight by Atlantis before the fleet is retired. BioServe hardware and experiments are manifested on the Endeavour space shuttle as well as on future resupply vehicles traveling to the International Space Station from other countries, Stodieck said.

BioServe also has plans to fly hardware and experiments in microgravity on existing commercial rockets and on space vehicles now under development, Stodieck said.

BioServe also has flown several K-12 educational experiments on the International Space Station, including seed-germination studies, crystal garden growth experiments and the life cycles of butterflies – all of which have provided learning opportunities for middle school and high school students around the world, said Stefanie Countryman.  Countryman is BioServe's business manager and coordinator of education outreach.

BioServe is a nonprofit, NASA-funded center founded in 1987 at CU-Boulder to develop new or improved products through space life science research in partnership with industry, academia and government. Since 1991 BioServe has flown payloads on 36 space shuttle microgravity missions.

A fuel leak delayed a planned November 2010 launch, after which cracks were discovered in the shuttle's fuel tank, pushing the launch date into 2011.

Send your thoughts and suggestions for the Newsletter.
END_OF_DOCUMENT_TOKEN_TO_BE_REPLACED