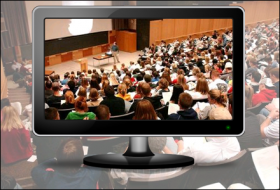 Leadership recognizes the University of Colorado is at a critical juncture as educators and administrators explore the most effective avenue to enhance and expand higher education opportunities using online technology. Leaders are not in agreement, however, on how to go about it.

At a Tuesday meeting at CU Denver in St. Cajetan’s on the Auraria Campus, the Board of Regents heard a task force recommendation on new technologies from a report by Goldstein and Associates, and an alternative proposal by Regent Stephen Ludwig.

In recent months, Phil Goldstein of Goldstein and Associates spent time with each of the campuses, system administration and the systemwide technology committee to help determine the university’s best options moving forward as a system and as individual campuses.

For CU, Goldstein suggested adopting an institution-led model with a shared infrastructure, supplementing it with systemwide coordination and support, and establishing campus-specific online learning strategies within a common framework.

Challenges he sees include developing an enabling structure, faculty support, determining which resources should be shared and which should be unique to each campus, avoiding overlap in program offerings, and securing funding to fuel innovation and new start-up programs.

“It is essential to continue to participate in those things and determine which ones work and which won’t, it’s also an opportunity – with things like your engagement with Coursera – to influence the direction these online models are taking.”

Ludwig said pursuing the path CU is on and that is proposed by the task force for online education would leave the university behind.

“If we are to remain faithful to the commitment to be public educators and fulfill our obligation to the people of the state who have supported us . . . I would strongly argue that a stand-alone online campus is something we must do.”

The university was founded on a mission to provide a high-quality education and professional training, public service, advancing research and knowledge to benefit the students and community, he said. The university has done that well, but like the now-defunct Rocky Mountain News, Blockbuster Video and Borders bookstores, it is stuck in the tried-and-true, outdated business model that could prove disastrous, he said.

“I would offer that after a certain age every institution – nonprofit, social club, church, synagogue, government – forgets it was created to serve others and shifts its main focus to one of survival, that as an institution it moves further away from its creating and founding mission,” Ludwig said. “It begins to view its existence as the core value rather than the people it was created to serve. We confuse tradition with mission, survival with service.”

Goldstein agreed with Ludwig that an aggressive approach to advancing online education in all its forms is needed. He cautioned, however, that the ability to establish an entirely separate infrastructure in an environment with limited resources might create more problems.

“Rather than reinvent everything, it’s best to do from within or you have to construct something separate,” he said, noting completely online programs may be successful on their own but haven’t affected the core.

“Some have been successful, but they’re having to double back and decide, ‘How do we change the rest of our educational processes?’ You will get a force for change, but it will take a lot of time.”

Regent Glen Gallegos, R-Grand Junction, expressed concern that a separate, online institution would be done in isolation. “I don’t think we create a new school and that will be the answer,” he said. “We should move ahead together, not in isolation.”

Deborah Keyek-Franssen, associate vice president for digital education and engagement, told the board the technology committee had approved Goldstein’s report and plan of action, but was open to reconvening and will ask Ludwig to present his proposal to the committee.