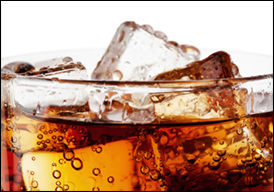 A groundbreaking new study released this week by the University of Colorado’s Anschutz Health and Wellness Center and published in Obesity, the journal of The Obesity Society, confirms definitively that drinking diet beverages helps people lose weight.

“This study clearly demonstrates that diet beverages can in fact help people lose weight, directly countering myths in recent years that suggest the opposite effect – weight gain,” said James O. Hill, PhD, executive director of the University of Colorado’s Anschutz Health and Wellness Center and a co-author of the study. “In fact, those who drank diet beverages lost more weight and reported feeling significantly less hungry than those who drank water alone. This reinforces that if you’re trying to shed pounds, you can enjoy diet beverages.”

The 12-week clinical study of 303 participants is the first prospective, randomized clinical trial to directly compare the effects of water and diet beverages on weight loss within a behavioral weight loss program. Conducted simultaneously by researchers at the University of Colorado Anschutz Health and Wellness Center in Aurora and Temple University’s Center for Obesity Research and Education in Philadelphia, the study shows that subjects who consumed diet beverages lost an average of 13 pounds – 44 percent more than the control group, which lost an average of 9 pounds. More than half of the participants in the diet beverage group —64 percent — lost at least 5 percent of their body weight, compared with only 43 percent of the control group. Losing just 5 percent of body weight has been shown to significantly improve health, including lowering the risk of heart disease, high blood pressure and type 2 diabetes.

“There’s so much misinformation about diet beverages that isn’t based on studies designed to test cause and effect, especially on the Internet,” said John C. Peters, PhD, co-author of the study and the chief strategy officer of the CU Anschutz Health and Wellness Center.  “This research allows dieters to feel confident that low- and no-calorie sweetened beverages can play an important and helpful role as part of an effective and comprehensive weight loss strategy.”

Study participants were randomly assigned to one of two groups:  those who were allowed to drink diet beverages – such as diet sodas, teas and flavored waters – or those who were in a control group that drank water only. With the exception of beverage options, both groups followed an identical diet and exercise program for the duration of the study.

In addition to losing 44 percent more weight than the control group, the diet beverage group also:

This latest study adds to the body of research demonstrating that diet beverages do not hinder, but in fact help, with weight loss. In particular, two studies published in the American Journal of Clinical Nutrition by researchers from the University of North Carolina in 2012 and 2013 randomly assigned non-dieting participants to drink either water or diet beverages. While both groups cut their food intake significantly, after six months the diet beverage group had a greater likelihood of reaching a meaningful (5 percent) amount of weight loss compared to the control group. The diet beverage group also experienced a greater reduction in dessert consumption than the water group. Overall, the findings suggest that diet beverages do not fuel a preference for sweet foods and drinks.

The study was supported by the American Beverage Association (ABA), a trade association in Washington, D.C.  It was peer-reviewed and posted on www.clinicaltrials.gov. Neither ABA, nor any of its members, was involved in any part of the study, its analysis or the writing of this paper.

Why I got vaccinated

COVID-19 vaccinations to be required of all CU faculty, staff, students

Send your thoughts and suggestions for the Newsletter.
END_OF_DOCUMENT_TOKEN_TO_BE_REPLACED