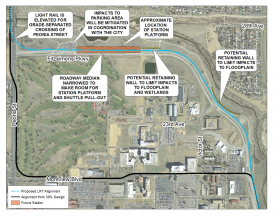 A new alignment of the Interstate 225 light rail line along Fitzsimons Parkway drew concern from some residents about potential effects to parking and nearby trails and wildlife, while others said they look forward to the line’s convenient transit option.

About 60 people attended an RTD FasTracks information meeting Aug. 21 at North Middle School in Aurora. Most of the residents live in Morris Heights, a neighborhood just north of Fitzsimons Parkway and east of Peoria Street.

This fall, engineers and planners will identify and mitigate any impacts to the Fitzsimons Parkway site, and will present their findings to the RTD Board of Directors and the public later this year.

In late June, the RTD Board of Directors voted 14-1 to realign the light rail line to run along Fitzsimons Parkway rather than cut across the University of Colorado Anschutz Medical Campus along Montview Boulevard as originally planned. The 10.5-mile line, which will travel between the existing Nine Mile Station and the future Peoria Station, providing connections to the Anschutz Medical Campus, is under construction and will open in 2016.

The realignment decision followed the board’s receipt of letters by CU President Bruce Benson and Lilly Marks, executive vice chancellor of the Anschutz Medical Campus and CU’s vice president for health affairs. They explained that running light rail down Montview would be problematic for several reasons, including cost, safety and science. Studies of other universities with light rail systems nearby showed the lines can adversely impact sensitive medical equipment on campus.

The parkway, which connects Peoria Street on the west side of the Anschutz Medical Campus to Colfax Avenue on the south, became the preferred route for light rail. The exact location of the Fitzsimons Parkway station, which will serve the Anschutz Medical Campus, will be determined through a collaborative effort between the University of Colorado, city of Aurora and the Fitzsimons Redevelopment Authority (FRA), said Chuck Culig, RTD FasTracks’ I-225 Rail Line project manager.

Some Morris Heights residents said they’re worried that transit users will park in their neighborhood to reach the walk-up Fitzsimons station, the exact location of which will be determined through a collaborative effort between the University of Colorado, the city of Aurora, FRA and public input. An Aurora planning official explained that the city is developing a parking management program to address potential parking impacts of the I-225 light rail line. He noted that the city will use a combination of strategies, including residential permit parking and on-street meters, to deter commuters from parking in residential areas.

Other notable aspects of the Fitzsimons Parkway alignment and platform:

A comprehensive transportation plan is underway as part of the Anschutz Medical Campus master plan. The plan includes a campus circulator that would connect the new Fitzsimons station and key locations, including CU Anschutz, University of Colorado Hospital and Children’s Hospital Colorado.

A nearby resident suggested that the station feature windbreaks and shelters for transit riders. Several residents asked how the shuttle would work and whether it would attract riders.

Michael Del Giudice, director of Institutional Planning at the University of Colorado Denver | Anschutz Medical Campus, said the university has studied transit circulators at other urban institutions nationwide. “What we have seen at other places is that ridership increases over time, just like it has in Denver,” he said. “If it’s convenient and it can get you to your destination, ridership increases.”

Partners that include the university, FRA and the hospitals on the Anschutz Medical Campus will be involved in working out a sitewide shuttle plan, Del Giudice said. “Whatever shuttle system happens, it has to be a collaborative effort.”

An environmental evaluation is being performed during the next month to study potential wildlife impacts, as Sand Creek Greenway runs alongside Fitzsimons Parkway to the north and east.

“Where we need to realign the bike path or re-establish it, we will make those efforts,” he said. As for decisions regarding nearby parking, connector transit to the Fitzsimons Station, a possible pedestrian bridge over Peoria Street and other issues, “Things will evolve as the campus develops.”

Anschutz Medical Campus currently encompasses 22,000 employees and visitors daily and, after full build out, is expected to grow to more than 50,000. One meeting participant said RTD is to be commended for forward-thinking approaches to the region's transit needs: “And all of these good people who are concerned about their homes, I can tell them they’re going to grow in value” after the light rail line opens, he said. “Their community will grow and be even better than it was before. I can tell you from experience that that’s what usually happens.”

The public is encouraged to comment on the process through Friday. Learn more about the realignment presentation, the preferred realignment and the project. Comments can be submitted at the FasTracks website, via email at I-225@rtd-fastracks.com or by calling the construction information line at 720-863-8505.