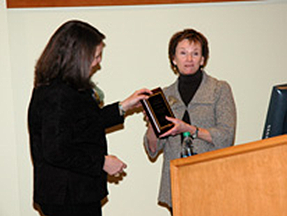 Judith Albino, right, dean of the Colorado School of Public Health, presents a plaque of appreciation to U.S. Rep. Diana DeGette after DeGette’s talk on "Protecting Our Nation's Food Supply" at the Anschutz Medical Campus.

The United States is on course for a comprehensive food safety system for the 21st century, but bureaucratic and financial hurdles remain, U.S. Rep. Diana DeGette, D-Colo., said Monday.

DeGette, who represents Colorado's First Congressional District, spoke about "From Farm to Fork: Protecting Our Nation's Food Supply" at the Anschutz Medical Campus. About 60 people attended the Colorado School of Public Health event.

DeGette said food safety has made gains, especially thanks to the Food Safety Modernization Act passed by Congress and signed by President Obama about a year ago.

It remains a significant problem, however, as last summer's listeria outbreak shows. That outbreak, traced to a Holly, Colo., cantaloupe grower, was the nation's deadliest foodborne-illness outbreak since 1924, infecting 146 people in 28 states and causing 30 fatalities, DeGette said. In all, foodborne illnesses cost the United States $152 billion annually.

The Centers for Disease Control report that food hazards cause 48 million illnesses in the nation each year, including 128,000 hospitalizations and 3,000 deaths, DeGette said.

"These are staggering numbers, and when you hear them in the abstract they're horrifying. But they're not nearly as horrifying as the stories we hear from actual victims of food poisoning."

An Energy and Commerce Committee (DeGette is a member) investigation into the listeria outbreak found systemic problems in food handling and "underscored the critical need for a more effective food safety infrastructure," the congresswoman said.

The Food Safety Modernization Act includes two provisions that DeGette said she was in charge of getting in the legislation: traceability and mandatory recalls.

"The first thing the bill does is it has the FDA (Food and Drug Administration) work with the food industry to develop traceability so that, through interoperable computer systems, we can trace the food from the field to the fork," she said. "The mandatory recall provision gives the FDA the ability to have mandatory recall for contaminated foods. People are surprised to learn that until now, all recalls we had for food were voluntary."

Challenges remain of adequately funding the food safety act and of the bureaucratic difficulties posed by the FDA and the U.S. Department of Agriculture handling different aspects of food safety.

DeGette took questions from the audience, whose concerns ranged from safety testing of food supplements to how organic and animal food products are regulated.

At the end of the presentation, Judith Albino, dean of the Colorado School of Public Health, presented DeGette with a plaque of appreciation for her food safety efforts in Congress.

DeGette said she is pleased to see that the Colorado School of Public Health has proposed a Center for Food Safety and Prevention of Foodborne Illness.

"Given the challenges we face almost every month with foodborne outbreaks, I can't think of a better place than this to have a center in the metropolitan area," DeGette said.

Send your thoughts and suggestions for the Newsletter.
END_OF_DOCUMENT_TOKEN_TO_BE_REPLACED