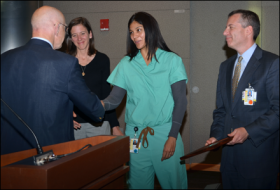 Tragedy and chaos reigned as victims of the July 20 theater shooting were pulled from police cars, from personal vehicles and from ambulances and quickly moved to the University of Colorado Hospital (UCH) Emergency Room. First was a 25-year-old woman arriving by private vehicle with a gunshot wound to her leg and her 4-month-old baby who had been dropped during the mayhem. Next came a police car with a 33-year-old man and then another with three shooting victims, a 17-year-old woman with facial wounds, a 27-year-old woman with an eviscerated abdomen and a 23-year-old woman with bilateral wounds. But amid the cries, a calm, tactical response prevailed. It was what the doctors, nurses and staff at UCH had trained for.

Richard Zane, M.D., chairman of the department of emergency medicine at the CU Anschutz Medical Campus, presented those details and more during a presentation to the Board of Regents at its meeting Wednesday on the campus. “This was a night that nobody will ever forget,” he said while detailing a timeline of responses to events. “Every single person who touched a patient that night is a hero.”

Split-second decisions at the crime scene and at the hospital -- such as moving the wounded at the theater to the north side of the building, transporting the injured in police cars, a hunch by an ER nurse who called for re-enforcements early on – “unequivocally, absolutely and directly saved lives,” Zane said.

The worst of the wounded were cared for in a predetermined disaster area by a dedicated team, while other patients in the emergency department also received urgent care. More than 130 other employees from almost every department in the hospital headed to UCH to help. Victims were transported to operating rooms, recovery areas and intensive care units. A command center opened to manage needs from every corner of UCH, and the hospital withstood the spotlight of media organizations from around the world. Worried family members were cared for, and an emergency hotline was set up, handling more than 1,000 calls from the community.

A medical disaster is defined as a time “when the destructive effects of natural or manmade forces overwhelms the ability of a given area or community to meet the demand for health care,” Zane said. The medical disaster plan for mass casualties at UCH was in place and each element was carried out with precision:

“All of these were identified ahead of time and that’s one of the reasons there was such an incredible response,” Zane said.

Doctors and nurses from all floors and all areas of the hospital took on tasks outside their responsibilities to support the effort to save lives, whether by helping existing patients – the ER already was over capacity before the shooting – rearranging rooms, getting the right equipment to where it was needed, or calming victims.

“Not one single time in the entire night did one person say, ‘This is not my job, this is not what I’m supposed to do,’” Zane said. “Every single request was met almost immediately. It was a truly heroic response.”

The crisis is over – every victim who entered the hospital with a heartbeat, left with a heartbeat – but the trauma continues, he said. Last week, Zane assisted a patient who had a bullet fragment embedded in his skull from the theater shooting. He hadn’t sought care previously because he didn’t want to take time away from the critically wounded.

“Everyone in our community has dealt with this in a different way,” Zane said. “The challenge is not only how to provide this care, but how to keep it ongoing.”

Tagged with:
Board of Regents, School of Medicine, University of Colorado Hospital