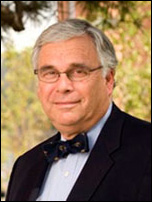 The University of Colorado School of Medicine should launch a 12- to 18-month process to rethink how it is organized, Dean Richard Krugman, M.D., said recently in his 20th annual State of the School address.

These are tough times, the dean said, with federal and state support stalled – at best – and clinical competition intensifying. In response, he said, the medical school needs to ask whether it is structured so “we can be as great as we want to be.”

In remarks titled “A Crucial Decade,” Krugman posed this question:

“If we were starting over today, with 2,250 faculty and a billion dollars in revenue, how should we organize ourselves to have maximum success in each of our missions – research, clinical care, education and community service?

This effort should be broad-based, the dean said, and should be a magnet for philanthropy.

He said it should be linked to the revision of the Anschutz Medical Campus master plan begun under Lilly Marks, the executive vice chancellor of the campus and Vice President for Health Affairs.

The existing master plan was created in 1996-97 and did not contemplate Children’s Hospital Colorado or the Veteran’s Hospital joining the medical school in Aurora.

The dean reviewed some of the highlights and challenges of the past year, including efforts to make health care on the campus more efficient and effective.

He cited the initiative called ACT I (for Accountability, Clinical Transformation and Improvement) and the newly formed Clinical Leadership Council.

Krugman also noted that the Liaison Committee on Medical Education (LCME) revisited CU after an accreditation visit two years ago and found that the medical school had successfully addressed most of the issues raised in 2009. The next LCME survey won’t be until 2016-17.

One of those issues, Krugman noted, was diversity. More than 30 percent of the students in the Class of 2015 are from groups designated as underrepresented in medicine, and half meet a broader school definition of diversity that includes, among other factors, rural and socioeconomic background.

Krugman said that the medical school continues to look into creating branch campuses. In addition to ongoing talks about a campus in Colorado Springs, he said, he recently was part of a preliminary discussion about the possibility of a branch campus in Fort Collins.

The dean demonstrated the power of the medical school when it comes to research funding. Of the $419 million in grants and contracts that came to the University of Colorado Denver in FY 2011, he said, $397 million came to the Anschutz Medical Campus and of that the medical school accounted for more than $333 million.

Send your thoughts and suggestions for the Newsletter.
END_OF_DOCUMENT_TOKEN_TO_BE_REPLACED