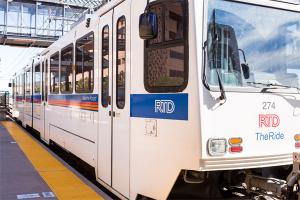 With apologies to Duke Ellington, passengers on the FasTracks line from Denver’s Union Station to Denver International Airport next summer will take the University of Colorado A Line.

CU has partnered with the Regional Transportation District to name the train, the first such agreement in RTD’s new naming rights program. The RTD Board of Directors on Tuesday unanimously approved the deal. CU also will receive dominant advertising position on the Flatiron Flyer, the bus rapid transit system that will run between Union Station and Boulder beginning in January.

CU President Bruce D. Benson said the partnership is an important part of a larger systemwide marketing initiative that will launch in September.

“We’re in a competitive market for the best students, faculty and staff, as well as research dollars and philanthropy, so it’s important for us to market CU’s value, contributions and accomplishments to people in Colorado and beyond,” he said. “We also face higher education competitors from in state and out of state, traditional campuses, for-profit campuses and online colleges. All of them are spending significant sums on marketing and CU must compete.”

RTD Board Chair Chuck Sisk said the organization is pleased to team up with the state’s leading public higher education system.

“We are thrilled to be partnering with the University of Colorado for this first contract through our corporate partnership program,” Sisk said.

The University of Colorado A Line is estimated to have 10 million riders annually and the Flatiron Flyer is estimated to have 3 million. The agreement not only calls for naming rights, but placement of the university’s name and marks on other RTD collateral, including maps, websites, mobile apps, station signage and bus/train wraps.

Benson said many of CU’s key target audiences for the marketing initiative will be among the passengers on the University of Colorado A Line, including Coloradans heading to and from DIA and national and international visitors to the state.

The university expects to garner millions in publicity value from the initiative, as well as capitalize on Denver’s growing dynamism on the national and international stages, he said.

CU will pay RTD $5 million over the five-year life of the deal, with an option to renew. The vast majority of the funding for the initiative will come from initiative funds (interest earnings on CU investments), not tuition dollars, state funding or donations.

Send your thoughts and suggestions for the Newsletter.
END_OF_DOCUMENT_TOKEN_TO_BE_REPLACED