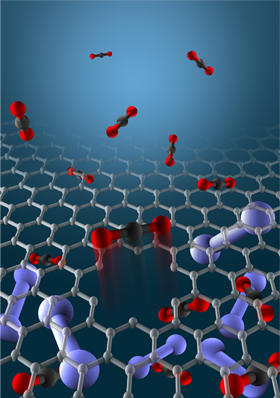 This illustration depicts a single molecular-sized pore in a graphene membrane. The membrane is separating carbon dioxide from nitrogen. A carbon dioxide molecule is passing through the pore while nitrogen molecules are too large to pass through. (Illustration by Zhangmin Huang)

This illustration depicts a single molecular-sized pore in a graphene membrane. The membrane is separating carbon dioxide from nitrogen. A carbon dioxide molecule is passing through the pore while nitrogen molecules are too large to pass through. (Illustration by Zhangmin Huang)

Engineering faculty and students at the University of Colorado Boulder have produced the first experimental results showing that atomically thin graphene membranes with tiny pores can effectively and efficiently separate gas molecules through size-selective sieving.

The findings are a significant step toward the realization of more energy-efficient membranes for natural gas production and for reducing carbon dioxide emissions from power plant exhaust pipes.

The research team introduced nanoscale pores into graphene sheets through ultraviolet light-induced oxidative “etching,” and then measured the permeability of various gases across the porous graphene membranes. Experiments were done with a range of gases including hydrogen, carbon dioxide, argon, nitrogen, methane and sulphur hexaflouride -- which range in size from 0.29 to 0.49 nanometer -- to demonstrate the potential for separation based on molecular size. A nanometer is 1 billionth of a meter.

“These atomically thin, porous graphene membranes represent a new class of ideal molecular sieves, where gas transport occurs through pores which have a thickness and diameter on the atomic scale,” Bunch said. 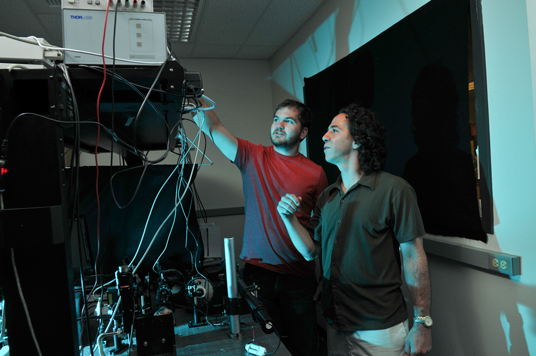 Graphene, a single layer of graphite, represents the first truly two-dimensional atomic crystal. It consists of a single layer of carbon atoms chemically bonded in a hexagonal “chicken wire” lattice -- a unique atomic structure that gives it remarkable electrical, mechanical and thermal properties.

“The mechanical properties of this wonder material fascinate our group the most,” Bunch said. “It is the thinnest and strongest material in the world, as well as being impermeable to all standard gases.”

Those characteristics make graphene an ideal material for creating a separation membrane because it is durable and yet doesn’t require a lot of energy to push molecules through it, he said.

Other technical challenges will need to be overcome before the technology can be fully realized. For example, creating large enough sheets of graphene to perform separations on an industrial scale, and developing a process for producing precisely defined nanopores of the required sizes are areas that need further development. The CU-Boulder experiments were done on a relatively small scale.

The importance of graphene in the scientific world was illustrated by the 2010 Nobel Prize in physics that honored two scientists at Manchester University in England, Andre K. Geim and Konstantin Novoselov, for producing, isolating, identifying and characterizing graphene. Scientists see a myriad of potential for graphene as research progresses, from making new and better display screens and electric circuits to producing tiny biomedical devices.

The research was sponsored by the National Science Foundation; the Membrane Science, Engineering and Technology Center at CU-Boulder; and the DARPA Center on Nanoscale Science and Technology for Integrated Micro/Nano Electromechanical Transducers at CU-Boulder.

Send your thoughts and suggestions for the Newsletter.
END_OF_DOCUMENT_TOKEN_TO_BE_REPLACED