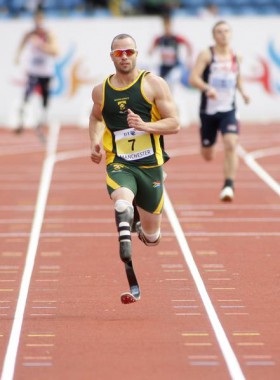 University of Colorado Boulder researchers will be watching closely when South African bilateral leg amputee and sprinter Oscar Pistorius, dubbed “The Blade Runner,” makes his way to the starting block for the 400-meter sprint in the 2012 London Olympics.

Professors Rodger Kram and Alena Grabowski of the integrative physiology department have been involved in several studies analyzing the performance of amputee athletes, including Pistorius, who use blade-like, carbon fiber leg prostheses in track events. In 2007, Pistorius was barred from international competition by officials from the International Association of Athletics Federations, or IAAF, who ruled his Cheetah Flex-Foot leg prostheses conferred him an advantage over other runners.

The decision was based in large part on a German study commissioned by the IAAF.  However, data presented in April 2008 by a team that included Kram and Grabowski to the Court of Arbitration for Sport in Lausanne, Switzerland -- an international group set up to settle disputes in sports -- showed Pistorius gained no physiological advantage from the Cheetah prostheses over competitors. The team’s evidence and testimony played a key role in overturning the decision, allowing Pistorius to compete in able-bodied events.

“The methodology of the German study that involved measuring Oscar’s oxygen consumption while running was flawed,” said Kram, who has been measuring the oxygen consumption of runners since 1983. “When we had a chance to properly measure Oscar we found that while he is quite economical in oxygen consumption compared to your average Joe, his values are well within what would be expected for a high-caliber athlete.”

Although Pistorius subsequently failed to make the 2008 Olympic team, he was selected by South Africa’s Olympic Committee last week to run in both the individual 400 meters and a leg of the 4x400 meter relay in the 2012 Olympic Games in London, which begin on July 27.

“I was delighted that Oscar was selected,” Kram said. “I was sure he’d be named to the 4x400 meter relay, but being named to the 400-meter individual event was a surprise.”

Since 2008, the research team involving CU-Boulder has continued its studies. In a 2010 study led by Grabowski, researchers used force-measuring treadmills to analyze the biomechanics of unilateral amputees -- those with one amputated leg -- over a wide range of running speeds. The team found the force produced by the prosthetic, carbon fiber leg was 9 percent less than that of the unaffected leg.  “Applying force to the ground is crucial in sprinting events,” Grabowski said.

“We inferred that running-specific prostheses impair force generation and likely limit top sprinting speed,” said Grabowski, who received her doctorate under Kram in 2008 and recently returned to CU-Boulder as a research faculty member after doing postdoctoral work at the Massachusetts Institute of Technology. Other authors on the 2010 paper included Kram; Craig McGowan of the University of Idaho; William McDermott of the Orthopedic Specialty Hospital in Murray; Utah, and Hugh Herr of MIT.

In a 2012 paper by the same group and led by McGowan, the leg stiffness of Paralympic sprinters with both unilateral and bilateral leg amputations was compared to non-amputee sprinters across a range of speeds. The team found leg stiffness remained constant or increased with speed in non-amputees but decreased in sprinting amputees.

“During running, the leg behaves much like a spring, and the stiffness of the leg greatly influences the overall mechanics of the runner,” Grabowski said. “The study indicates that the prosthetic device limits the ability of a sprinter to change their leg stiffness during running.” In the future, she said, researchers might be able to design a prosthetic device with “adaptive stiffness” that would more accurately emulate the mechanics of a biological ankle during sprinting.

Grabowski, whose work is funded by the Veterans Administration, is particularly interested in designing better prosthetic ankle devices for military veterans or those on active duty who have undergone amputations. In collaboration with the Denver Department of Veterans Affairs, Grabowski is beginning a research effort to further develop battery-powered ankle-foot prostheses for walking and running. Such prostheses have the potential to restore mobility to users similar to the mobility they had prior to amputation, she said.

The research team is interested in locating potential test subjects in the Denver-Boulder area with leg amputations to participate in lab studies.

“CU-Boulder is actively pursuing research that aims to improve the lives of amputees, particularly veterans and current military personnel,” she said. Potential study candidates may contact Grabowski at Alena.Grabowski@colorado.edu.

Research in Kram’s Locomotion Laboratory on the CU-Boulder campus goes far beyond athletics. Collaborating faculty and students are targeting the energetic costs of walking, including uphill and downhill walking in older adults; the energetics of passive cycling to treat and prevent obesity and heart disease; and studies on animal locomotion, including kangaroos, tortoises and elephants.