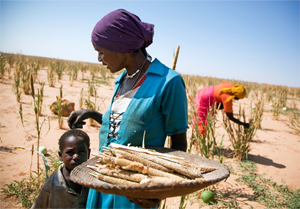 A University of Colorado Boulder faculty member will travel to Africa later this month to test a mobile smartphone technology developed by his team to rapidly detect and track natural carcinogens, including aflatoxin, which is estimated to contaminate up to 25 percent of the global food supply and cause severe illnesses in humans and animals.

Associate Professor Don Cooper, co-founder and chief science officer of Mobile Assay Inc., a CU startup company, developed the technology in his laboratory at the Institute for Behavioral Genetics. The trip to Africa is being funded by the Bill & Melinda Gates Foundation as a follow-on to a 2012 Gates Foundation grant to Mobile Assay Inc. as part of the Grand Challenges Explorations initiative.

The new technology includes using mobile devices, rapid diagnostic test strips (similar to pregnancy test strips), geographical tagging and cloud computing to rapidly detect, quantify and track common crop pathogens in real time to reduce their harmful impacts in developing countries. “Our new method is more sensitive, faster and more quantitative than any of the existing rapid tests out there on the market,” said Cooper.

Aflatoxins are highly toxic chemical poisons produced primarily by the fungus Aspergillus flavus, a mold that affects nuts, seeds and legumes and is known to cause liver cancer and compromised immune function in animals and humans. “Our new tools should ultimately allow farmers in developing countries to identify and track pathogens infecting seeds and share their data, which could improve crop yields and prevent crop losses,” he said.

The Agricultural Research Connections conference sponsored by the Gates Foundation will take place Aug. 25-30 in Nairobi and the nearby market town of Naivasha in Kenya. The goal of the workshops is to develop new partnerships among scientists doing agricultural research with the potential to create new pathways out of poverty for African farming families. “We are excited to meet with local farmers, community members and scientists to identify how we can best implement our mobile diagnostic tools in order to advance pathogen detection in sub-Saharan Africa,” said Cooper, also in the psychology and neuroscience department.

Identifying and tracking contaminated seeds is especially challenging in places like Africa, where individual farmers often keep their seed stocks stashed in boxes and sacks around the household and regularly trade them at village markets, said Cooper. “There will be a lot of work going on at the conference by scientists using interesting genetic tools to reduce or mitigate problems with aflatoxin,” said Cooper. “But without the ability to detect it, it’s difficult to know if one is actually succeeding.”

The testing method developed by Cooper and his team has been proven to be both fast and accurate. Users first obtain samples of grain suspected to be tainted, liquefy them and expose them to a customized test strip specifically designed to detect aflatoxin. A smartphone or tablet is then held over the test strip for automated image analysis.  Within minutes the smartphone screen displays two bands – a control band and a test band to quantify the level of the grain infection.

A key part of the “Lab-on-Mobile Device,” or LMD, platform developed by Cooper’s team is the Mobile Imaging Ratiometry, or MRI, a unique software algorithm developed by Cooper that analyzes the images from the smartphones or tablets in real time. The information is geo-tagged and shared through cloud computing in remote data storage facilities that can be instantly made available to project participants. The LMD technology also will allow for the creation of real-time electronic “push-pin” maps showing places where aflatoxins have been detected.

Cooper’s plan is to eventually put smartphones or electronic tablets into the hands of people working in strategic farm communities. “If we can become operational on 100 different farms, for example, and conduct several tests a week, then we will be able to start aggregating data and looking at trends over time,” he said. “We might be able to detect particular times when aflatoxin in grains starts to appear on the market during informal grain exchanges, allowing us to pinpoint the origin of the infected grain.”

In addition to learning about agriculture in Kenya, Cooper and other participating scientists will tour regional laboratories and facilities.  They also will visit local farms and explore possible collaborations with other workshop participants that could contribute to the advancement of agriculture in sub-Saharan Africa.

Such detection could open the door for more effective mitigation strategies to halt the outbreaks, including treating only parts of specific crop fields rather than spraying entire fields with pesticides. “We are looking for strategic partners, in this case community leaders, who can help us implement this technology,” said Cooper.

Rapid test strips are typically made of cellulose nitrate with antibody-impregnated pads designed to react with specific antigens to produce a specific visual signal. There are now LMD-compatible strips used to identify more than 1,000 different pathogens and pollutants.

Cooper said Mobile Assay Inc. is collaborating closely with Neogen Corp., headquartered in Lansing, Mich., which specializes in food and animal safety issues and which produces dozens of lateral test flow strips, including those for aflatoxin. The smartphone or tablet reader developed in the Cooper lab is designed not only to recognize specific test strips, but also to provide other information, including specific bin numbers where the grain is stored as well as grain expiration dates and other data.

Aflatoxins are estimated to contaminate roughly 25 percent of the global food supply according to the Food and Agriculture Organization of the United Nations with 4.5 billion people exposed to high, unmonitored levels, primarily in developing countries.

Grand Challenges Explorations fund individuals worldwide who are taking innovative approaches to some of the world’s toughest and most persistent global health and development challenges.  GCE invests in bold ideas that have potential to solve problems people in the developing world face every day, according to the Gates Foundation.

Experts estimate seed-borne diseases cause a loss of 50 million tons of food annually and that losses in developing countries are 60 to 80 percent higher than in industrialized countries. Estimates show 90 to 95 percent of seed used by small-scale and subsistence farmers is acquired through informal sources at the farm and community level.

CU owns exclusive license to the technology developed by Cooper and his team and has an equity share in Mobile Assay Inc. Cooper and Mike Williams, the CEO of Mobile Assay Inc., are working closely with CU’s Technology Transfer Office, CU’s Entrepreneurial Law Clinic and the Innovation Center of the Rockies to develop a corporate structure and commercialization plans for the CU spinoff company.

Send your thoughts and suggestions for the Newsletter.
END_OF_DOCUMENT_TOKEN_TO_BE_REPLACED