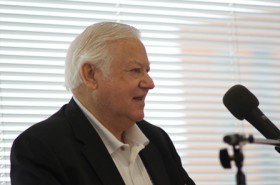 Some 15 years ago, the tenacious Marv Loflin leaned across his desk and reassured Terri Straut, "When we launch CU Online, it will never go away."

It hasn't. In its first three semesters, online courses at the university went from zero to 35. More than 450 courses now are offered.

Loflin, central to the creation of CU Online and the former dean of the College of Liberal Arts and Sciences, received the inaugural CU Online Innovation Award on May 19 during the 10th Annual CU Online Spring Symposium at Anschutz Medical Campus. Straut, who has managed eLearning implementations for institutions of higher education including the University of Colorado, introduced Loflin as "the most entrepreneurial person I've ever known."

"CU Online was a smash success instantly because the world needed it," said Straut, who now works with Loflin at the International Hispanic Online University (IHOU). "The student body was desperate to find alternatives to driving to campus, parking and paying money for day care."

Loflin, president of IHOU, is credited with having the foresight, sass and stick-to-itiveness needed to establish online learning at CU Denver. Consistently, he was told, "We've never done that before, so we can't do it." Said Loflin: "I just started ignoring it when people said that to me."

"Faculty are able to experiment with new ways to teach; to do things that haven't been able to be done before," he said. Plus online learning is cost effective for the university, with a course start-up cost of about $5,000.

"If you apply yourself, you can learn more with courses online," Loflin said. "The potential for reaching people in education online is much greater."

Bob Tolsma, assistant vice chancellor of Academic Technology/Extended Learning, noted online course enrollment was up 19 percent from last year. While some have dismissed online learning, saying the completion rate of online courses is lower than for on-campus classes, Tolsma reported the rate is now indistinguishable from on-campus courses. Plus, he added, completion of online graduate courses is now greater than those taken on campus.

In its 10th year, the CU Online Spring Symposium highlighted trends in academic technology, demonstrated the best in online pedagogy and stimulated conversation about what's around the corner. Sessions ranged from the latest technological tools, adapting from text books to an online environment, better course creation and best practices for interaction with students.

Never short on wit, the symposium opened with a brief history of the greatest innovations in learning, hosted by none other than Mark Twain.

Send your thoughts and suggestions for the Newsletter.
END_OF_DOCUMENT_TOKEN_TO_BE_REPLACED