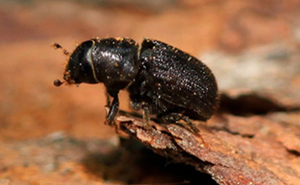 A research team involving several scientists from the University of Colorado Boulder has found an unexpected silver lining in the devastating pine beetle outbreaks ravaging the West: Such events do not harm water quality in adjacent streams as scientists had previously believed.

According to CU-Boulder team member professor William Lewis, the new study shows that smaller trees and other vegetation that survive pine beetle invasions along waterways increase their uptake of nitrate, a common disturbance-related pollutant. While logging or damaging storms can drive stream nitrate concentrations up by 400 percent for multiple years, the team found no significant increase in the nitrate concentrations following extensive pine beetle tree mortality in a number of Colorado study areas.

“We found that the beetles do not disturb watersheds in the same way as logging and severe storms,” said Lewis, interim director of CU’s Cooperative Institute for Research in Environmental Sciences. “They leave behind smaller trees and other understory vegetation, which compensate for the loss of larger pine trees by taking up additional nitrate from the system. Beetle-kill conditions are a good benchmark for the protection of sub-canopy vegetation to preserve water quality during forest management activities.”

A paper on the subject was published in the Jan. 14 issue of the Proceedings of the National Academy of Sciences.

“The U.S. Forest Service and other agencies have established harvesting practices that greatly mitigate damage to forests caused by logging, and they deserve credit for that,” Lewis said. “But this study shows just how important the survival of smaller trees and understory vegetation can be to stream water quality.”

In waterways adjacent to healthy pine forests, concentrations of nitrate is generally far lower than in rivers on the plains in the West like the South Platte, said Lewis. Nitrate pollution is caused by agricultural runoff from populated areas and by permitted discharges of treated effluent from water treatment facilities.

“In Colorado, many watersheds have lost 80 to 90 percent of their tree canopy as a result of the beetle epidemic,” said Lewis, also a faculty member in CU-Boulder’s ecology and evolutionary biology department.  “We began to wonder whether the loss of the trees was reducing water quality in the streams. We knew that forestry and water managers were expecting big changes in water quality as a result of the pine beetle outbreak, so we decided to pool our university and federal agency resources in order to come up with an answer.”

Study co-author and CU-Boulder Research Associate James McCutchan of CIRES said the new results should help forest managers develop more effective ways to harvest timber while having the smallest effect possible on downstream ecosystems.  “This study shows that at least in some areas, it is possible to remove a large part of the tree biomass from a watershed with a very minimal effect on the stream ecosystem,” he said.

Understory vegetation left intact after beetle outbreaks gains an ecological advantage in terms of survival and growth, since small trees no longer have to compete with large trees and have more access to light, water and nutrients, said McCutchan. Research by study co-author and former CU undergraduate Rachel Ertz showed concentrations of nitrate in the needles of small pines that survived beetle infestations were higher than those in healthy trees outside beetle-killed areas, another indication of how understory vegetation compensates for environmental conditions in beetle kill areas.

The researchers used computer modeling to show that in western forests, such a  “compensatory response” provides potent water quality protection against the adverse effects of nitrates only if roughly half of the vegetation survives “overstory” mortality from beetle kill events, which is what occurs normally in such areas, said Lewis.

The severe pine beetle epidemic in Colorado and Wyoming forests is part of an unprecedented beetle outbreak that ranges from Mexico to Canada. A November 2012 study by CU-Boulder doctoral student Teresa Chapman showed the 2001-02 drought greatly accelerated the development of the mountain pine beetle epidemic.

The researchers measured stream nitrate concentrations at more than 100 sites in western Colorado containing lodgepole pines with a range of beetle-induced tree damage. The study area included measurements from the Fraser Experimental Forest near Granby, a 23,000-acre study area established by the USFS in 1937.

The new study was funded by the USFS, the USGS, the National Science Foundation, the National Oceanic and Atmospheric Administration and the National Park Service.  CIRES is a joint research institute between CU-Boulder and NOAA.